‘Are we not allowed to be Palestinian on Instagram?’

Supermodel Bella Hadid made headlines last week after confronting Instagram for deleting a photo she had reposted of her father’s U.S. passport, which listed “Palestine” as his birthplace. “Are we not allowed to be Palestinian on Instagram?” she wrote to her 31.5 million followers on the platform. “This, to me, is bullying. You can’t erase history by silencing people. It doesn’t work like that.”

Hadid received both praise and criticism for her statement. According to the celebrity gossip site Page Six, a spokesperson for Facebook (Instagram’s parent company) apologized for the move, which they explained as a misunderstanding: “To protect the privacy of our community, we don’t allow people to post personal information, such as passport numbers, on Instagram. In this case the passport number was blurred out, so this content shouldn’t have been removed. We’ve restored the content and apologized to Bella for the mistake,” they said.

There is something undeniably satisfying about seeing gossip columns report on the Hadids’ Palestinian heritage and the social media giant’s apology. In the same way, an Instagram scene from everyday family life, such as singer-songwriter Dua Lipa and Anwar Hadid (Bella’s youngest sibling) cooking maqloubeh, a traditional Palestinian dish, takes on tremendous political proportions. There is a vengeful type of pleasure in hearing the family be vocal — sometimes loudly and raucously — about Palestine, and in their way of refusing to back down. This delight is rooted in resisting a history of erasure and denial.

Bella’s father, Mohamed Hadid, was born in Nazareth in November 1948. Known for building luxury hotels and mansions in Los Angeles, the real estate mogul’s two daughters, Bella and Gigi, are supermodels whose faces can be seen in fashion campaigns all over the world. The Hadids have amassed a considerable following on social media and colossal influence beyond, which they’ve increasingly used over the years to bring attention to the struggle for Palestinian rights. With the Hadid family, Palestine is spilling over into spaces where it was not welcome before; it is bursting, embodied and not othered, in the center of the industry of making and circulating images.

Whether these bids for visibility serve actual policy changes and are useful to advancing the fight for freedom and equality, or are merely empty gestures and political performance, is a difficult question with no easy answers. Yet in the case of Palestine — in which existence itself is complicated and constantly denied, and which tends to cause more controversy than consensus, prompting public figures to shy away from it — these acknowledgments are not inconsequential.

In general, in spaces that are not directly concerned with the geopolitics of states, Palestine has been governed by regimes of visibility and invisibility. Although those have evolved over time, it seems that Palestine is allowed to exist within some spaces, and not allowed in others. It is allowed to be frozen within the cycle of news, where the reality, the histories, and lives of Palestinians are erased in favor of a cyclical narrative of conflict. In American popular culture, which one would hope would allow for more nuanced representation, Palestine occasionally crops up, often as a vague reality that can be conveniently located on two extremes of a spectrum of violence: either innocuous or dangerous. Most importantly, it is never talked about by Palestinians themselves.

In one episode of 30 Rock, for example, protagonist Liz Lemon and her boyfriend, played by Matt Damon, agree on what the “solution” to Palestine would be. “I’ve never met anyone before who had the exact same idea as me about what to do with Palestine,” he exclaims. Within the fiction itself, agreeing on a solution to Palestine is a sure sign of being kindreds. And the show thus establishes a winking, self-referential game with the viewer, all the while erasing Palestinians who are merely the butt of the joke, and a problem to solve.

When not mentioned in such a comparatively positive light, Palestine (or rather: “The Palestinians”) are relegated to the realm of misery or terror. Although his origins are quickly bowdlerized in subsequent seasons, Abed Nadir in the meta-TV show Community is of Palestinian and Polish descent. His father is a vociferous, arts-hating falafel vendor. In one episode, one of his cousins, a niqab-wearing woman from the Gaza Strip, gets to spend a day in the sun in covert, temporary liberation thanks to the machinations of one of Abed’s friends.

Both examples demonstrate how Palestine is usually presented as a faraway problem that needs to be solved — either by diplomacy, surveillance, or, more often, death. It is never a lived reality. When made visible on such a scale, Palestine is discussed, dissected, and resolved by people who are not Palestinians.

Palestine is acceptable in popular culture as long as it is passive, an estranged and othered object of speech and solutions. Whenever Palestine oversteps its bounds, or is brought before a broader audience by its own agents enacting their own liberation, it is silenced yet again. One need only remember — an example among countless others — the 2011 controversy surrounding Palestinian artist Larissa Sansour’s work Nation Estate, and the decision by the sponsor of the prestigious Prix Élysée to exclude the work from the prize. 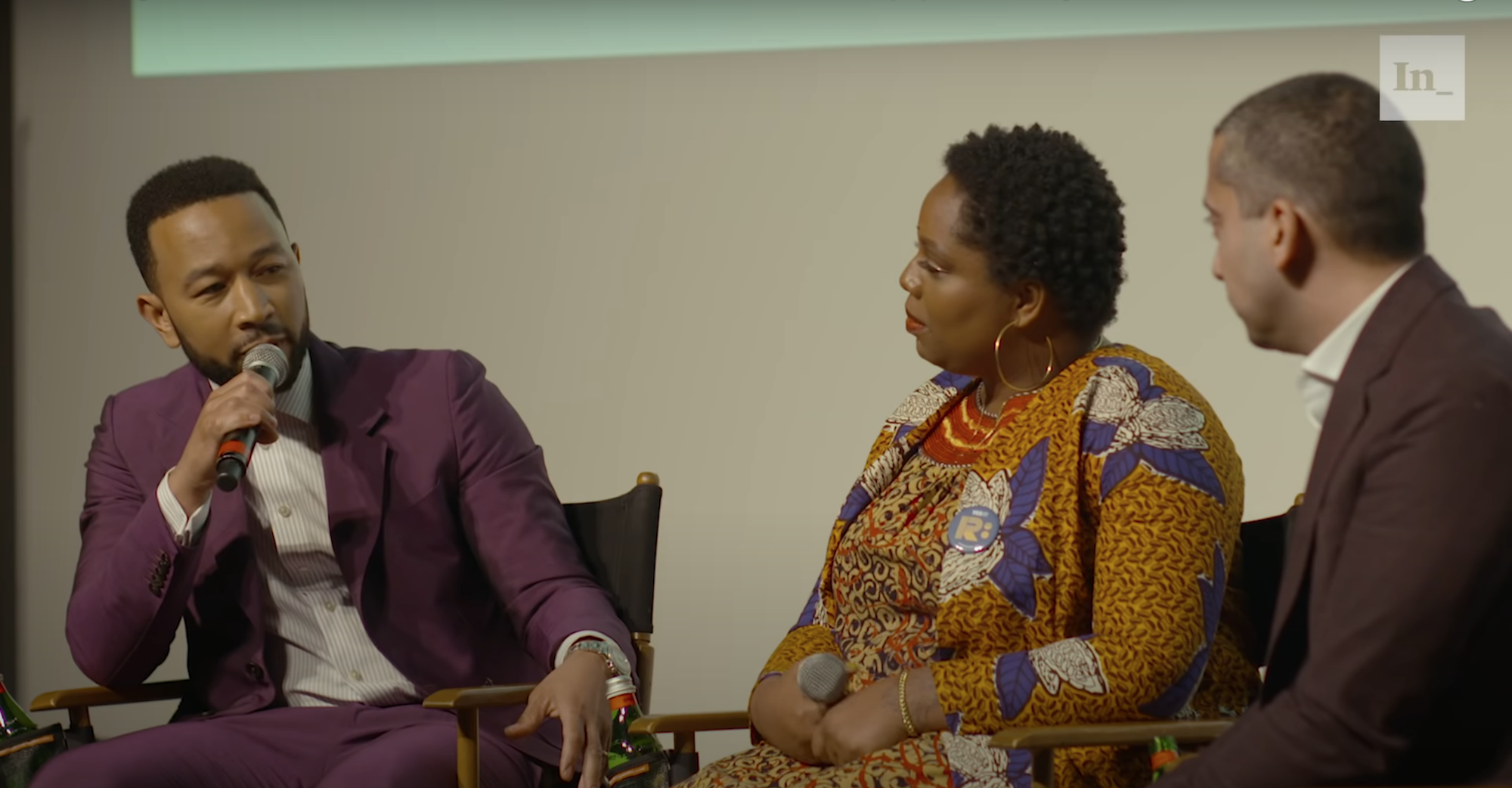 Musician John Legend at a live taping of the Deconstructed podcast at the Writer’s Guild Theater in Los Angeles, with host Mehdi Hasan and Patrisse Cullors, co-founder of the Black Lives Matter Global Network. (Screenshot from The Intercept’s Youtube channel)

Bella Hadid’s increasingly vocal support for Palestine as a Palestinian comes in the context of a slow shift in discourse within the entertainment industry. John Legend, for instance, has been a staunch supporter of Palestinian rights for years, and renewed his backing during a discussion on The Intercept in February, in which he insisted that advocating for Palestinian rights is a “baseline human position.”

It bears highlighting once more, however, that the very fact that the Hadid family can speak out the way they do is because of the work of grassroots activists in Palestine, the United States, and beyond. These activists have greatly contributed to placing Palestine at the center of social justice discourses, notably by emphasizing the connections between Palestine and the broader struggle for human rights, as well as the fights against police brutality and mass incarceration of Black people in the United States.

This change is surely terrifying to those who would erase or forget the Palestinians, who would rather simplify their struggle in order to better silence them. Here, in Hadid, is a Palestinian body and voice; a woman’s, no less, and one of the most visible and coveted on the world stage. Yet the decision by Instagram to remove the picture of Hadid’s father’s passport — even if they backtracked — serves as a reminder that even the wealthy and powerful are at risk of being erased if they so much as reclaim Palestine as their own in spaces where they are not expected to.

The ongoing colonization of Palestine relies, among other things, on the perpetuation of the myth of fixed borders between separate people (“Arabs” and “Jews”) and of two competing claims to land. In fact, the evolution of what the “Israeli-Palestinian conflict” has meant over the decades shows that the issue is mobile, that land and people evolve and change.

That Mohamed Hadid could have been born in Nazareth, Palestine, a few months after the Declaration of the establishment of the State of Israel — and that such a fact is recognized on official U.S. documents — is a testament to this flux and to the possibilities it can birth. His passport blurs the lines, disrupting not only history but also current attempts at erasing and containing it. What is at stake is not merely the existence of a thing called Palestine — this, most people might agree on to some extent — but also of the powerful political proposition it represents. Palestinians — especially women — who do not conform to the images that are expected of them cause uproars. This explains why Bella Hadid’s voice, unapologetically and fiercely Palestinian, resonates the way it does.