EuroPal Forum organised a Parliamentary briefing in Dublin on Tuesday 27th Sept 2016.  The briefing was attended by members of parliament from various parties and a number of researchers and activists concerned with the Palestinian cause.

Dr. Ahmed Yousef, the former consultant to the Palestinian former prime minister Ismail Haniya, joined the event from Gaza via Skype to give a testimonial about the situation there. A number of parliamentarians and senators attending contributed to the discussion.

The briefing addressed ways to support Palestinians to achieve their national rights and the role of parliamentarians in Europe in influencing their governments to take more balanced stances towards the Palestinian- Israeli conflict. It also addressed the required role from the European governments to break the ongoing siege on Gaza for the past 10 years.

The chair of EuroPal Forum, Zaher Birawi, confirmed the significance of the role of parliamentarians who are friends of Palestine and supporters of freedom and human rights to increase efforts to communicate the accurate narrative of the conflict and to initiate practical ideas to shift the policies of their countries towards solving the Palestinian conflict.

Sean Crowe MP stressed on the importance of collaboration amongst all those who believe in the rights of Palestinians for freedom and independence, regardless of internal political differences amongst the various parties in Ireland. "The common beliefs should be sufficient to have a unified stance against Israeli aggression", he added.

Richard Boyd MP stated that the challenge faced is how to influence decision makers in Europe and the governing parties to understand the nature of the conflict in its accurate political and historical context; and how to place the right pressure on them to take brave decisions refuting Israeli racism against Palestinians.

Aengus Snodaigh MP spoke about his experience in joining efforts to break the siege on Gaza and the importance of parliamentarians to visit the Palestinian occupied lands to witness the reality on ground with their own eyes. He argued that that step would be enough for them to act in defense of the rights of Palestinians.

Dr. Azzam Al-Tamimi stated that it is important to concentrate on resisting the racist Israeli ideology that is behind the actions of Israel.  "That ideology is behind the creation of  a racist occupation that can be compared to the apartheid that ruled South Africa" he added.

Senator Frank Feighan from Fine Gail party of the governing coalition in Ireland affirmed the importance of communication with all parties, including those who might not agree fully with the Palestinian narrative. He argued that this is important in order to initiate a reach out for change in the European policies. 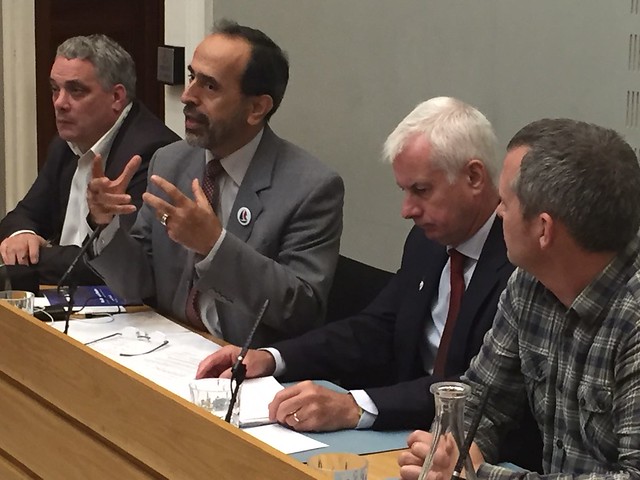