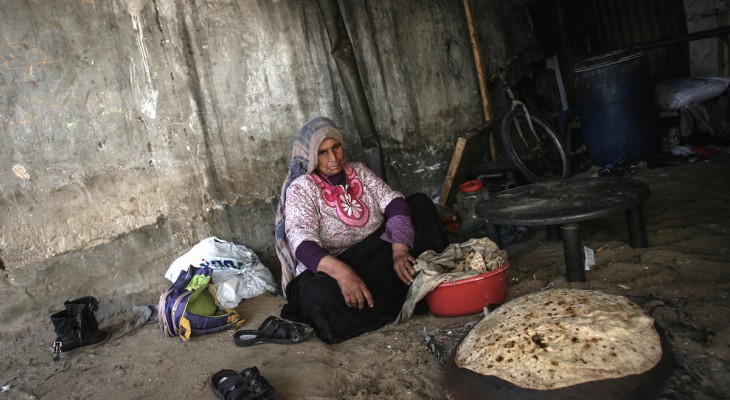 Rayqa al-Malalha, 55, looks out her kitchen window at a putrid wastewater pond in the front yard of her Rafah City house in the Gaza strip. Her municipality does not supply clean drinking water, in part because the toxic pool is leaking into the water piping system.

Yet Rayqa’s troubles are not unique. Palestinians in Gaza regularly consume contaminated water, even when the liquid they drink has already been treated at a purifying facility. In Gaza 45-percent of the water processed in desalination plants is contaminated, according to the Palestinian Water Authority (PWA).

For nearly all Gazan households there is no alternative. Purchasing expensive tanks of clean water is unaffordable. Ninety-five percent of the strip’s 1.8 million residents rely on this polluted water. For those who can pay for clean water, they will spend up to a third of their income, found the water advocacy group E-WASH.

In 2012 the United Nations warned Gaza is facing a water and sanitation crisis due to Israel’s blockade of the coastal Mediterranean strip. All of the water that ends up piped into residents’ homes originates from one underground aquifer. Ninety-six percent of the reserve is unsafe for human consumption. The over-extraction of this aquifer and the intrusion of seawater, coupled with the infiltration of agricultural fertilizers and untreated sewage, have all resulted in levels of chloride and nitrates up to three times the World Health Organization’s (WHO) recommended standards.

Not only is Gaza’s water dangerous to drink, it often does not flow out of the faucet.

“Water runs into our house only once or twice a week. Yet we receive so little of it that we can hardly store some in our water tanks”, Rayqa said.

To meet their needs Rayqa’s family is left with no choice but to buy pricy water from private vendors. It costs five times more than municipal water. Her family needs it to bath, cook and drink.

“My husband is jobless and we cannot afford to buy clean water once a week, so we are forced to either ask our neighbors for some water or use network polluted water for drinking and cooking”, Rayqa said.

Such hardships are shared by many in the besieged Gaza strip. The average water consumption per person per day in is as low as 80 liters, well below the WHO minimum standards of 100. And of those 80 liters, most are unfit for human consumption.

Besides the limited access to safe water, the infrastructure in Rayqa’s neighborhood of al-Arabia in Rafah is also faulty, which poses further health risks. The district is not connected to the public sewage system as materials and funding to develop the infrastructure are scarce. In total 23-percent of the population in Gaza are also do not have sanitation services.

Without a sewer, the residents in al-Arabia depend on cesspits to dispose of their liquid waste. Financially overburdened with regular emptying fees, many in the area end up discharging their sewage into nearby agricultural lands. This creates large, deep ponds of sewage that poses a serious threat to the residents of the neighborhood, particularly children.

Rayqa’s grandchildren have constant bouts of colic and severe diarrhea. Her belief is  the illnesses are most likely related to the poor water quality and the sewage flooding the streets.

“We’re bothered the whole day and night by a nasty smell and swarms of mosquitoes. The situation gets worse in the summer, when we can’t sleep at night from the mosquito bites. Our life has become unbearable in this area—but what alternatives are we left with?” Rayqa lamented.

The Israeli blockade imposed on Gaza since 2007 severely impedes the recovery and development of the water and sanitation sector, delaying and hindering more than 86-percent repair projects due to the lack of materials, according to Gaza’s Coastal Municipality Water Utility.

This is a humanitarian crisis, but not a resource crisis. It needs a political solution. Unless the blockade is lifted, there can be neither real recovery, nor sustainable development within the water and sanitation sector in the Gaza Strip. Only then will Rayqa and her family be able to live a dignified life.