'Aleppo's hell is better than this': The Syrians who want out of Gaza 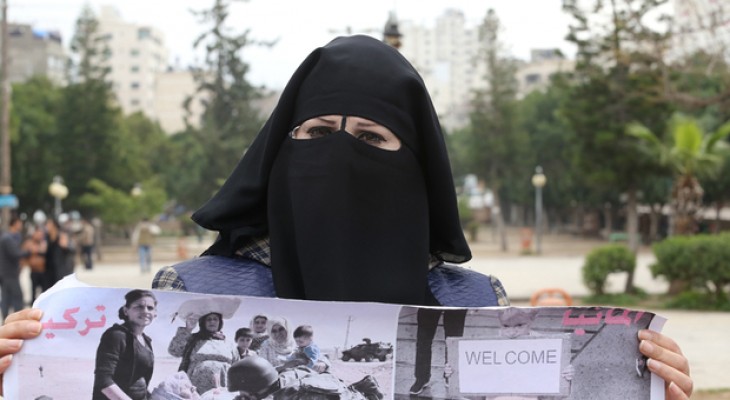 GAZA CITY - Refugees from Syria in Gaza are protesting to be allowed to leave, with some even saying they want to return home because conditions in the besieged Palestinian territory are so intolerable.

Gaza is currently home to an estimated 1,200 refugees who are mainly from Syria but include others from Libya and Yemen. Most of them arrived through now-demolished tunnels that once linked the enclave to Egypt.

Many say they were drawn there by promises of jobs, or in the hope of starting their own businesses, despite the challenges posed by Gaza’s near-decade-long blockade by Israel and Egypt.

Some of them have Palestinian backgrounds and come from the refugee camp of Yarmouk, south of the Syrian capital Damascus, which is home to the descendants of families displaced from their lands in modern-day Israel and the occupied Palestinian territories in 1948 or during the Six Day War of 1967 between Israel and its Arab neighbours.

Yarmouk has been the scene of regular fierce fighting between pro-government forces and rebels during Syria’s five-year war and was briefly captured by the Islamic State (IS) group last year.

Last year, the UNRWA, the UN’s agency for Palestinian refugees, said that several thousand people in Yarmouk were living in “deeply abject conditions” and that the situation there was worse than in 2014 when the UN considered the camp to be a besieged area.

But Abdullah Salman, who said he and others had been enticed to Gaza by an offer of work after fleeing from Syria to Egypt, told Middle East Eye that conditions even in war-ravaged Yamouk were preferable to life under the blockade.

“Our suffering intensifies every day. We are four families living in one house,” said Salman, who went to Gaza believing there would be more opportunities than in Egypt, where many other Syrians are also looking for work.

“We were offered work for six months but we’ve only been paid for two months, so we are still waiting for our rights.”

Last Friday, Syrians gathered in Gaza City’s al-Saraya square to call for their rights as refugees to be recognised and for better living conditions.

One child waved a banner reading: “I am a Palestinian child, don’t deprive me of a loaf of bread,” while another child’s banner said: “Our dignity is your dignity, don’t let it be ruined." Most Gazans face daily shortages and hardships caused by both the blockade and the political stalemate between Gaza’s Hamas-run administration and a Palestinian unity government put in place by a deal between Hamas and Fatah, which runs the West Bank-based Palestinian Authority, in 2014.

But Syrians complain that their lack of official status is making their plight worse, and even that the hospitality historically afforded to previous generations of Palestinians fleeing to Syria was not being reciprocated.

“Nothing forced us to come to Gaza, except the tough conditions we were living under, but we are living in Gaza without even minimum rights - and some of us are living breadless,” Abeer Rajeh told MEE.

Holding up a sign that read “The right to live and work is guaranteed by law,” she said that in most countries a wife had a right to be reunited with her family, but not in Gaza.

“We are unable to obtain Palestinian nationality, we fled our homes in Syria and all we have left are the streets to live on,” she said.

“Many of the Palestinian youth have lived in Syria and we hosted them in our homes, and now all we ask is to be treated decently, or at least that they repay the debt of kindness,” she added.

Manal Qurbash, another refugee, said: “Every day we suffer the same as the day before. In Gaza there is no prospect of a decent life, no basic rights - why are we being treated this way?”

Some admit too that the trauma of enduring Israel’s assault on Gaza in the summer of 2014 was far worse than anything they had experienced before leaving Syria.

They fear that deteriorating relations between Hamas and Egypt could also leave them stranded in the event of another war with Israel.

Leaving Gaza via the route they arrived has already become virtually impossible after Egypt destroyed dozens of tunnels last year and tightened up border security. Rajeha al-Ali told MEE that she had left Syria, first for Lebanon and then Turkey, with her husband and three children in 2011.

“We fled Syria to Lebanon, but it was not good, then we fled into Turkey, but were placed in cold tents. Then, we heard that Gaza offers jobs and apartments, but that was not the case when we got here,” Ali said.

“No one is listening to us, our pleas fall on deaf ears.”

Ali said she had been unable to obtain vital medication for two of her children’s chronic asthma. And having survived Gaza’s 2014 war, she said she did not want her children to suffer the same experience again.

“My family are still in Aleppo under siege, but their hell is better than Gaza’s paradise,” she said.

Officials in Gaza insist that the Syrians are being hosted as brothers and sisters. A YouTube video last month showing the Gazan children being told that one million Syrians were coming to Gaza also suggested a warm welcome awaited them – even though the number was rhetorical to gauge their reaction.

"I am willing to welcome them in my house," said one boy. "I will sleep down on the mattress and a child can take my bed."

At Gaza's Ministry of Social Affairs, Ali al-Khateeb, the head of family rehabilitation, told MEE that the ministry was working hard to help the Syrian families.

"We have put in place a programme and an emergency plan to deal with the refugee families in order for us provide them with whatever aid and money that we can put together," Khateeb said.

He said that despite the blockade the authorities had been able to provide each family with up to $350 as well as with some furniture and rent subsidies paid every three months.

UNRWA spokesman Chris Gunness told MEE that 848 Syrian refugees had registered at the organisation's office in Gaza up to January this year.

He said they were eligible to the same rights as other refugees and could send their children to UNRWA schools or attend its medical clinics and use its relief and social services.

"It speaks volumes about the sheer hopelessness of life under the illegal blockade in Gaza and the inability of people to believe in a dignified, stable and prosperous future that anyone would feel that life in Yarmouk was preferable," Gunness said.

"The UN Secretary General described Yarmouk as like a death camp. What does it tell us about life in Gaza that people would want to leave it and go to Yarmouk? This is why we demand that whether in Gaza or Syria, the underlying causes of the conflict must be addressed so that the Palestinians, like all civilians, can live in dignity."

Still, for a few Syrians the move to Gaza has been proved good for business.

Wafir Hamedo left Aleppo for Turkey in 2012 before making his way to Egypt and then into Gaza via the tunnels.

Once there, he set up the Syriana restaurant, creating a community hub and meeting place for Gaza’s small Syrian diaspora.

“Many Syrians come here to eat Syrian food, but others come to discuss politics and the situation in their country,” he told MEE. Yet for many people, the question of whether they can afford to eat at all, let alone dine out in a restaurant, is of more pressing concern.

Escalating housing costs for all Gazans fuelled by the destruction caused by the 2014 war have also left some struggling to pay their rent.

Yahya al-Sayed, and his wife Rajha al-Ali, told MEE that they lived in a furniture-less room apartment in Gaza City with their four children.

The couple said they were already 2,000 NIS ($510) in arrears and did not know how they were going to hang on to their home.

“We want to go anywhere to get out of here, even if it’s back to Syria,” said Sayed.

“We have survived their dreadful war, survived their blockade and now nothing is left for us here. We appeal to the United Nations to look into our issue and find us a home somewhere else.”