Like other children in the world, we want to play and be educated 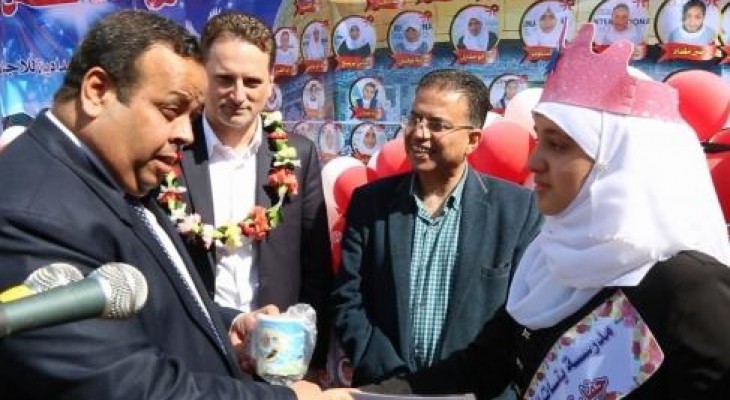 Being recognized as one of the top students in your class is a remarkable achievement. It requires perseverance, dedication and ambition. But getting there becomes all the more challenging when your studies and school life are frequently interrupted by conflict, trauma or illness. In Gaza, which has seen three devastating conflicts over the past seven years and continues to deal with a crippling blockade, Palestine refugee children often face overwhelming, seemingly insurmountable obstacles as they strive to exercise their right to a quality education. These realities make the story of these three young girls from Gaza all the more inspiring.

From 22 to 24 February 2016, UNRWA Commissioner-General Pierre Krähenbühl visited Gaza as part of his regular visits to the Agency’s five fields of operations. During his visit, he attended the ceremony honouring the top achieving students from Al-Amal Preparatory Girls School in Khan Younis, southern Gaza. At the ceremony, 60 students were honoured for their high achievements on the final exams of the first semester of the 2015/16 school year. “I am very proud to be at UNRWA’s Al-Amal School to honour these brilliant and talented children,” said Mr. Krähenbühl in his remarks during the ceremony. “Hope will always be there for all Palestinian children.”

He added, “Seeing these high achieving Palestine refugee children in Gaza, despite the severe and harsh living conditions, is an inspiration to all of us."

Among the students who were honoured was 14-year-old A’hed Salameh. During the 2014 summer hostilities, A’hed’s house was destroyed. Tragically, her mother and two of her older brothers were killed. A’hed was rescued from under the rubble and was transferred in critical condition to a hospital, where she remained unconscious in an intensive care unit for seven months.

When she woke up from her coma, she was informed of the tragic news. “It was a shock for me to know about my loss while I was at the hospital, but it was even harder when I returned,” recalled A’hed during the honouring ceremony.

Yet despite her great loss, and all of the challenging circumstances surrounding her, A’hed’s keenness and ambition to study hard and to be among the best-achieving students was obvious. “This did not hinder my hopes and commitment to continue to study hard to be among those who gained the highest marks – this is what my mom always wanted,” she added.

Ten-year-old Hala al-Housh was another one of the top students honoured at the Al-Amal Preparatory School ceremony, despite having a life-long illness.

When she was 8 months old, Hala was diagnosed with kidney failure. As she grew up, Hala did not let her illness affect her attitude. Hala had the courage and patience to continue and try her best in whatever she attempted.

When Hala had to start dialysis treatment, her positive attitude faded and her state of mind deteriorated. She refused to attend school, and her treatment outside Gaza continued for a full year. “At the hospital I was helping Hala to study basic subjects like Arabic, English and math,” said Hala’s mother. However, her lengthy treatment left Hala one year behind her classmates.

“I felt really sad seeing my classmates and friends going to a higher grade,” said Hala. “But with the support of my teachers, I persevered and I became one of top-achieving students. Doctors warned me and told me to be cautious about moving around, but I insisted on attending the honouring ceremony and to share these special moments.”

Yafa Abu Hadrous is a sixth-grade student and was also among the highest achieving students at Al-Amal Preparatory Girls’ School. “Knowing that filled my heart with joy, and I am very honoured that the UNRWA Commissioner-General gave me the certificate,” she said.

Though Yafa has been honoured every year, this year was different, because she was the highest achieving student at the sixth-grade level. “The Commissioner-General’s presence today is something that helps push us forward,” explained Yafa. “It is a chance to convey our message that like other children in the world, we want to play and be educated.”

A’hed echoed these sentiments: “I am very honoured that the UNRWA Commissioner General is here today. He is a very humble person – his presence today made me very proud. I really appreciate all of the support he represents to all Gaza students by being here today.”