Israel and friends battle the boycott in Britain By: Ben White 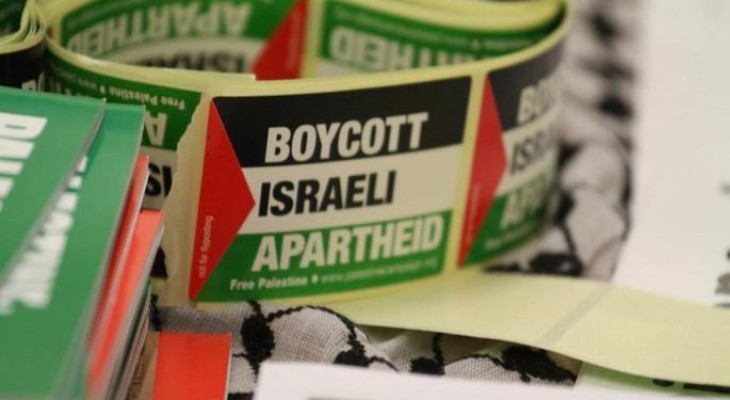 On February 17, British Cabinet Minister Matthew Hancock stood alongside Israeli Prime Minister Benjamin Netanyahu in Jerusalem, and announced the publication of “new guidance” for local authorities concerning procurement. The move was trailed - and presented by the government - as designed to ‘ban’ boycotts of Israeli goods and services by councils.

But did the procurement guidance really criminalise boycotts - and what about additional, pending moves by the British government to restrict how local authorities choose to invest pension funds? What is really going on behind this attack on local democracy, in the name of shielding the Israeli state, its institutions, and complicit corporations from a growing global boycott campaign?

First, let us take a step back and consider some context. In 2005, some 170 Palestinian groups - trade unions, students, political associations, NGOs, and others - published a call for an international campaign of Boycott, Divestment and Sanctions (BDS) against Israel. Over the years, the BDS campaign has attracted growing support, boosted by Israeli attacks on the Gaza Strip, right-wing Israeli governments, the absence of even a superficial peace process, and, the activism of Palestinians in the diaspora and their growing number of allies in civil society.

While initially seeing the BDS campaign as an irrelevant nuisance - a view still clung to by some - the Israeli authorities soon realised the dangers faced by this growing form of activism. BDS is about accountability, a direct challenge to decades of impunity. It is changing the narrative in the West, whose governments Israel relies on for protection that is, ultimately, vulnerable to public pressure. Finally, it has also got results; performers have refused to go to Tel Aviv, mainline churches and pension funds have divested, and even companies have withdrawn.

Israel’s anxiety has thus only intensified over the years. Already in 2007, an Israeli Ministry of Foreign Affairs (MFA)-convened conference discussed “academic and economic boycotts: pre-emptive strategies.” In 2011, Israel passed a domestic anti-boycott law, described as “the silencing and the restriction of legitimate protest to criticise and act to change Israeli policy.” Britain’s then-Foreign Minister William Hague criticised the law on the grounds that it “infringes on the legitimate freedom of expression.” The law has since been upheld almost in its entirety by the Supreme Court.

In recent years, anti-BDS initiatives and conferences, whether organised by the Israeli government itself or private advocacy groups and institutes, have come thick and fast; just this year alone, Israeli ministers have convened Knesset meetings on how best to spend the year’s NIS 100 million, anti-BDS budget, and boasted of their plans to target Palestine solidarity activists and BDS campaigners using cyber technology. This week, the Anti-Defamation League said they will partner with Israeli think-tank the Reut Institute to produce a new study of, and suggestions for how to fight, BDS.

Another key tool in Israel’s fight against BDS is ‘lawfare’. Lawfare, the use of lawsuits, the threat of legal action or even legislation, to suppress Palestinian solidarity activism is nothing new. Shurat HaDin, for example, an organisation with links to the Israeli government and its security services, has sued Jimmy Carter, threatened Oxfam, and pursued unsuccessful legal action against an Australian academic who supports the call for a boycott of Israeli universities. Last June, the group held a seminar in Jerusalem on how “to train lawyers from abroad to litigate BDS.”

Until the last year, lawfare efforts in the UK have largely consisted of the activities of UK Lawyers for Israel, and an ill-fated attempt to take the University and College Union to an employment tribunal. But in 2015, a new kid on the block emerged – Jewish Human Rights Watch (JHRW). The group’s website does not say much about who they are; it simply states that JHRW was “established to combat and record the anti-Jewish boycott movement’s action, the rise of anti-Semitism and to respond accordingly.” The Twitter account dates its origins to February 2015.

JHRW is the trading name of a company called Jewish Rights Watch, incorporated on December 17, 2014 – four months after a devastating Israeli attack on Gaza that prompted a surge in Palestine solidarity activism. There are four listed officers: Jonathan Neumann, Robert Henry Festenstein, Joseph Rosenfield, and Manny Weiss. Weiss, who according to a report in The Jewish Chronicle actually “started” JHRW, is a commodities trading advisor with a variety of business interests. In 2011, one of Weiss’ companies donated £5,000 to Michael Gove.

Festenstein, according to his Law Society entry, is Sole Practitioner at the Manchester-based insolvency specialists RHF Solicitors, who have also acted as JHRW’s solicitors. He blogs at The Times of Israel and, at least as recently as August 2015, was listed as a ‘Committee Member’ on the website of North West Friends of Israel, a group established in 2014 (he now no longer appears on the site). Neumann, meanwhile, is a writer who has published a number of articles for US-based Commentary Magazine, and has also apparently done work with The Forum for Jewish Leadership.

JHRW activities have varied. Their first public action was to hold a tiny protest outside the offices of anti-poverty charity War on Want. Targets have included a London pub that hosted a Palestine musical fundraiser; the letter from RHF Solicitors threatened to report the owners to the Counter Terrorism Command at the Metropolitan Police Service. Last October, JHRW responded to the publication of a full-page ad in The Guardian supporting an academic boycott of Israel with their own, full-page ad a few days later. Clearly, there are funds available at short notice.

The bulk of JHRW’s activity, however, has been focused on seeking judicial reviews against local councils who have passed motions in support of Palestinian rights. The most high-profile of these cases has been that of Leicester City Council, who in November 2014 passed a motion that recognised “the right of the State of Israel to exist in peace”, and condemned the occupation of the West Bank and Israeli settlements. The council also resolved “insofar as legal considerations allow, to boycott any produce originating from illegal Israeli settlements in the West Bank.”

In August 2015, nine months later, JHRW lodged a claim for judicial review at the High Court, in which they requested, inter alia, a declaration that the policy to boycott produce originating from Israel’s West Bank settlements is unlawful, a “quashing order in respect of the policy”, and costs. Speaking to the press, JHRW’s Jonathan Neumann claimed that the council’s motion amounted “to a get-of-out-town order to Leicester Jews.” In November 2015, the High Court granted permission for judicial review, and the case is ongoing, as a date has not yet been set for the case to be heard.

JHRW has also sought judicial review of a motion passed by Swansea City Council back in June 2010. The motion noted the illegality of Israeli settlements under international law, and the role of French company Veolia in transportation infrastructure connecting such settlements (Veolia, under pressure, subsequently withdrew from Israel entirely). The motion stated that the council would not sign “any new contracts or renewal of any existing contracts with Veolia or any other company in breach of international law, so long as to do so would not be in breach of any relevant legislation.”

The judicial review claim was lodged at the High Court on October 2, 2015, and two months later, JHRW announced that Swansea had performed a “U-turn” in response to their legal claims, but did not give any details. When asked for further information, a council spokesperson told me on December 8 that “Swansea Council has never boycotted Israel or Israeli goods. As far as the Council is aware proceedings are ongoing and it would not be appropriate to comment further at this time.”

In January, JHRW boasted that they had “made history”, and that Swansea Council had “offered to rescind its BDS motion.” This press release has since been removed from its website. Oddly, a letter from Swansea’s legal department was posted on Twitter by Adam Milstein, chair of the Israeli American Council and recent coordinator of an anti-BDS meet in Tel Aviv attended by Israeli minister Gilad Erdan. Milstein claimed in his tweet that Swansea was “the first council in Europe or UK, to completely stop boycott of Israeli products” – which Swansea had never done in the first place.

Interestingly, the letter – whose two pages can be viewed here and here – outlines the weaknesses of JHRW’s claim, but says the council did not want to spend further money on the matter. In early February, however, Swansea Council leader Rob Stewart “rubbished claims” that the 2010 motion had been abandoned, and said recent statements by JHRW “misrepresent entirely the motion passed by council in 2010 and the situation now.”

Stewart added that “Jewish Human Rights Watch has recently instigated a potentially costly legal process in order to try and get the council to rescind a motion from 2010 which it disagrees with. That is an attack on democracy. The council is a democratic organisation and as democratically elected politicians we believe in free speech and freedom of expression. The motion was correctly submitted, debated and voted upon - that is how democracy works.”

The councillor also pointed out that the council motion had no bearing on the council procurement policy, continuing: “The Council had no option other than to respond to these untrue and unfair claims but will not be able to make any further comment due to on-going legal proceedings.” On February 16, a council spokesperson reiterated that there never had been a boycott of Israeli goods.

In a third and final case, JHRW also lodged a claim for judicial review at the High Court concerning a motion passed by Gwynedd Council (the papers were filed on the same day as for Swansea, on October 2, 2015). The motion in question, adopted a year previously, saw councillors condemn Israel’s attack on Gaza, call for “a trade embargo with Israel”, and underline the council’s “decision to stop investing in Israel or in that country’s establishments.” A Gwynedd Council spokesperson told me on December 8 that there were “ongoing legal proceedings which the Council is defending.”

In part two of this report tomorrow: the UK government’s attack on local democracy and the politics of the procurement guidance.