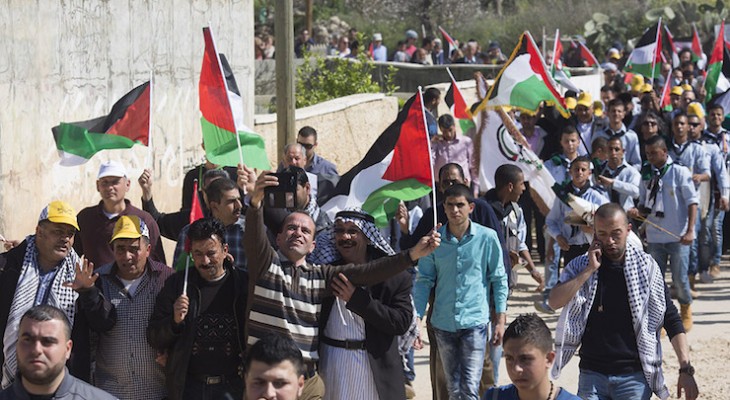 West Bank, Palestine - Hundreds of protesters gathered in Bilin on Friday to mark 11 years of weekly demonstrations against the Israeli occupation and the separation wall there.

Villagers congregated in the centre of Bilin after Friday prayers at the mosque, where they were joined by Palestinians from nearby towns, Israeli and international activists.

Chanting anti-occupation slogans, the protesters marched through the village into its agricultural land and up to the separation wall.

As the crowd approached the wall, Israeli soldiers fired volleys of tear gas canisters into the crowd. The soliders later fired sponge tipped bullets at protesters, resulting in injuries to two Palestinians.

Some of the crowd dispersed and some youths responded by flinging the tear-gas canisters back towards the soldiers.

The episode lasted about an hour and a half, before the demonstrators returned to the village.

Israeli bulldozers first arrived in the village in February 2005, ready to construct a concrete wall between the Israeli West Bank settlement Modiin Illit and Bilin.

The planned route of the wall would have cut the village off from around 1,950 dunams (1,950,000sq metres) of its agricultural land.

The plan would have amounted to around half of the village's total land, which provided the main source of income for Bilin.

Villagers immediately protested against the Israeli military's intentions to effectively annex the land, organising demonstrations and inviting international activists, including Israelis, to join them.

"In 11 years we succeeded in reaching people from across the world," said Iyad Burnat, who operates a media centre in the village.

"We wanted to send the message to the people that this isn't a security war. It's an attempt to confiscate our land, demolish our homes and demolish our lives.

"We are working very hard against Israeli propaganda, to explain the life of Palestinians."

Despite the weekly actions, where non-violence was preached and largely practised, the separation barrier was completed along its originally planned route in 2008.]

Two years later, after a petition was filed by an Israeli nongovernmental organisation in conjunction with the villagers, Israel's high court ruled that the route of the barrier was illegal and should be moved.

The decision effectively won the village back around 650 dunams of land from the initial loss of 1,950 dunams.

The barrier was moved in 2011, meaning that around 1,300 dunams of Bilin land remains behind the barrier today, on the side of the Israeli settlement.

Despite that, the decision was perceived as a victory of sorts among the villagers.

"We have succeeded in our struggle because we are right," said Abu Rahman, who has organised the weekly protest since it began.

"It's good for us to get back half of our land, but we will continue to struggle because this illegal settlement is being built on our land."

There have been painful setbacks along the way. Two of the village’s residents have been killed in the weekly demonstrations.

In April 2009, Bassem Abu Rahmah was killed after he was shot in the chest directly with a tear-gas canister. Jawaher Abu Rahmah, Bassem’s sister, died as a result of tear gas inhalation in 2010.

Bassem's mother, Subhia Abu Rahman, attended Friday's protest and told Al Jazeera that it was important for Palestinians to continue demanding their rights and the return of their land.

"It was so painful to lose two children," she said. "But they died fighting for their country, and the whole village is proud of them."

Bilin has become an international symbol of the wider non-violent resistance movement in the occupied West Bank. One of its residents made a documentary about the struggle which was nominated for an Oscar, while groups of international activists and curious travellers are brought in for the marches on a weekly basis.

"Over the last 11 years, we have reached people around the world and people are beginning to understand the Palestinian people. Bilin's struggle has played a big part in that," Burnat said.