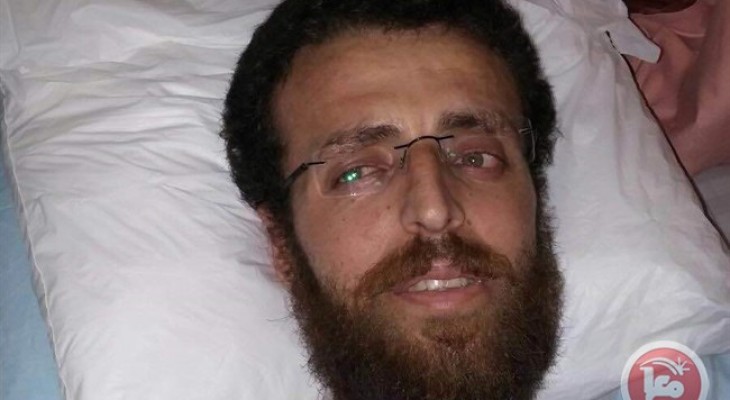 Amnesty International on Wednesday demanded Israeli authorities to transfer hunger-striker Muhammad al-Qiq to a Palestinian hospital in Ramallah in the occupied West Bank.

As the 33-year-old Palestinian journalist entered his 85th day on hunger strike against his administrative detention by Israel, Amnesty said in a statement that al-Qiq, on the verge of death, has the right to treatment by doctors of his choice as “an unconvicted detainee.”

Visitors to al-Qiq in recent days told Amnesty that he remains conscious, but his medical condition is “extremely grave and his vital organs could fail at any time.”

The Israeli Supreme Court on Tuesday rejected a petition by the detainee to be moved to a Palestinian hospital. Al-Qiq told his lawyer he would not end his strike until he was both released and brought to the Ramallah hospital.

Amnesty criticized the court decision, saying that the “decisions of Israeli courts on Muhammed al-Qiq, including the latest Supreme Court decision, fit a wider pattern.

“The Israeli courts have failed, over many years, to provide effective legal recourse to the thousands of Palestinian administrative detainees held without charge or trial on the basis of secret “evidence” withheld from them and their lawyers, under orders that can be renewed indefinitely, the group said.

Al-Qiq’s lawyers have argued that while a previous Israeli court decision ruled to suspend his administrative detention, Israeli authorities have “no legal grounds for confining him to a certain location or limiting his freedom in any way.

The conditional suspension, which can be revoked by the Israeli authorities if and when al-Qiq’s health improves, and the latest Supreme Court decision did not address the legality of his detention without charges, and have not upheld his rights.,” Amnesty added.

Evidence against al-Qiq is still being withheld from his lawyers, but a military judge at the Ofer Military Court said that last month that the file against him “accuses him of ‘incitement,’ of working with media associated with Hamas, a Palestinian political faction with an armed wing, and also of being a ‘threat to the security of the area.’”

Members of al-Qiq’s family told Ma’an during the earlier stages of his strike that they believe he is being held due to his work as a journalist.

Doctors continue to warn that al-Qiq is in critical condition and could face irreversible damage if he does not receive treatment soon.

His medical team at HaEmek hospital this month has respected his wishes not to receive treatment, but last month forced treatment on the detainee for four days, bringing international condemnation.

Al-Qiq is one of at least 650 Palestinians being held by Israel under administrative detention, a practice that the UN and Amnesty International have repeatedly argued Israel uses as excessively and in contravention to international law.