As in life, so too in death; there’s no peace for the Palestinians By: Yvonne Ridley 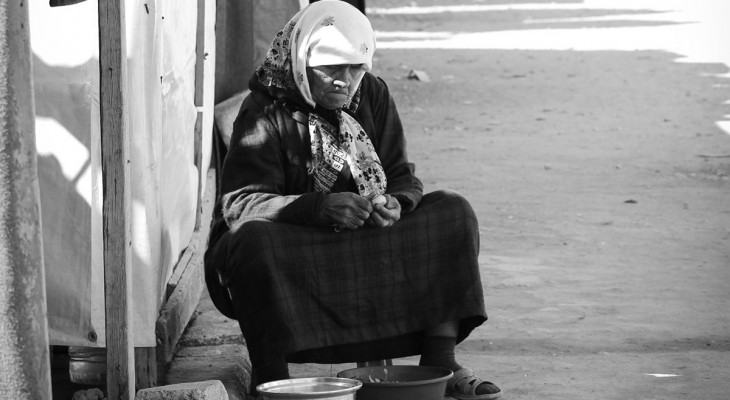 The refugee experience is a relatively new one for most of the Syrians living in the surprisingly neat terraces of temporary cabins that make up the camps in Lebanon's Beqaa Valley. This is not, though, the case for Fatima Ahmed Abu Reech.

The fragile 78 year-old must be one of the oldest surviving refugees in the world today who still remembers quite vividly the place that she calls home. Tabariyya (Tiberias) in Palestine is where she was born and, she says with a defiant tone honed out of a life of enduring hardship, it is where she wants to die. "I was only 10 when I left but I remember my country very well," Fatima told me, "and that is where I want to be buried."

Her last comment gave way to a deep sob followed by a stream of tears down her weathered but beautifully lined face. Remembering decades of tough challenges and the recent loss of her husband, it all became a bit too much. She allowed me to give her a comforting hug as a field worker from the British charity Interpal explained the reason for this uncharacteristic display of emotion.

While the focus on Syria has, since the war began in 2011, rested very much on the living and stories of survival, death-defying journeys and miracle escapes from Bashar Al-Assad's brutal armed forces, there is an uncomfortable truth which haunts the thousands of refugees living in the Beqaa Valley today; they have no resting place for their dead. Fatima and her family spent nearly a week trying to persuade villagers in nearby Ber Elias to allow them to have just one plot in the cemetery to bury her beloved husband Moustapha Fahour when he passed away a couple of years ago, aged 82.

The process was drawn out and painful, and it cost the family $2,000 before Moustapha was finally laid to rest. At one point, though, they had faced the prospect of trying to find $5,000 to bury Fatima's husband in a cemetery in the Lebanese capital Beirut. As we talked about the dilemma I was told that seven bodies are being held in the hospital mortuary indefinitely while the grieving families try to negotiate some land to bury them. "Last year we had a two year-old child and it took eight days to find a plot,” explained an official from the refugee camp. “It is a challenge which confronts many families here."

The options for refugees are limited, although some land has been offered by the Lebanese to cater for the Syrian refugees. The catch is that it carries a $100,000 price tag and the money must be paid up front. Such a cemetery would have enabled Fatima to lay her husband to rest with dignity and within the ideal timeframe for Muslims, as soon as possible after death. The whole experience was a metaphor which summed up their entire married lives as Palestinian refugees; even a funeral could not go ahead without hardship and struggle.

After being forced from their homes in Tabariyya as children, Fatima and Moustapha married and spent a lifetime as refugees in Syria. Despite their desperate situation, Fatima insisted that they never lost their desire to return home to Palestine. It’s a legacy that they have passed on to their children and grandchildren, just like millions of other Palestinian refugees living in camps in Syria, Jordan, Lebanon and the occupied West Bank and Gaza Strip.

Fatima and Moustapha's lifelong struggle was put to yet another test two years ago by the Assad regime's barrel bombs and sieges; once again the Palestinians had to grab their belongings with little notice and flee to yet another refugee camp in yet another country. History has repeated itself for too many Palestinian refugees over the decades. Even in death, though, their struggle is not over.

As Israel gets ready to celebrate the 68th anniversary of its creation in historic Palestine, and the 50th anniversary next year of its occupation of the West Bank and Gaza Strip, there seems to be little hope that peace will ever come to the rescue of the refugees. As in life, so too in death; there’s no peace for the Palestinians.