French-Palestinian couple fight to give birth in Jerusalem after wife deported By: Chloe Benoist 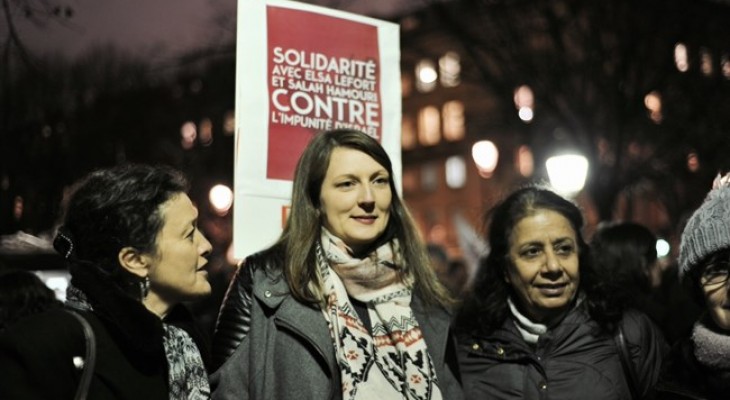 A Franco-Palestinian couple is racing against the clock after Israeli authorities in January detained and deported French consulate employee Elsa Lefort, then six-and-a-half months pregnant, preventing her from returning to her husband and their home in occupied East Jerusalem.

With only days left before her pregnancy is too advanced for her to travel by plane, Lefort and her husband, Salah Hamouri, are desperately trying to push their case so their child can be born in Jerusalem, in an unusually high-profile case illustrating the difficulties Palestinians face to obtain -- and keep -- their East Jerusalem residency.

Six months pregnant and a ‘danger to the security of Israel’

Hamouri, whose mother is French and father is Palestinian, is well-known after having spent nearly seven years imprisoned by Israel during the Second Intifada. He was detained for allegedly being a member of the Popular Front for the Liberation of Palestine and having plotted the assassination of Shas leader Obadia Yossef, charges he denied.

Hamouri was freed in 2011 as part of the Gilad Shalit prisoner swap deal. He later married Lefort, who had been involved in the French solidarity movement for his release, in East Jerusalem in May 2014.

Lefort told Ma’an that in June 2014, she began the application process for a spousal visa to obtain her own status as a resident of East Jerusalem.

However, the procedure dragged on for over a year until August 2015, when she was first notified that her application had been denied.

Lefort appealed the Israeli Interior Ministry’s decision to refuse her spousal visa, and in the meantime obtained a work permit from her employer, the French Consulate in Jerusalem, valid for a year until October 2016.

But on Jan. 5, as she returned from a brief trip to France for the holidays, Lefort was detained at the Ben Gurion airport in Tel Aviv by Israeli security forces for two days and two nights. She was initially told her paperwork was not in order, before being informed that she was being deported back to France because she constituted a “danger to the security of Israel.”

According to the couple, this is not the first time Hamouri’s status as a former prisoner has been used to make their lives difficult.

In March 2015, Hamouri was banned by Israeli authorities to enter the occupied West Bank for six months, effectively barring him from attending university in Ramallah to obtain his law degree. The order was renewed once again in September, once again in the name of “the security of the state of Israel,” he said in an interview with Ma’an,

For Lefort, the struggles she and Hamouri have faced represent additional punishment since his release, culminating in her detention in January.

“They could have put me on the first flight to Paris,” Lefort said. “I don’t know what is one’s aim when detaining a six-and-a-half-months pregnant woman for two days. Surely it’s if you want to discourage her from ever coming back.”

The border police informed her at the airport that her work permit had been revoked, but Lefort said that she or the French consulate had yet to received official notification on this issue.

“Why did they grant me a visa in October only to revoke it two and a half months later?” Lefort asked. “They could have told me no from the beginning.

“It’s not just me they are sanctioning, it’s French diplomacy as well. They are saying ‘we can revoke your employee’s visa whenever we wish, without even warning you.’”

Since January, Lefort has been in France trying to secure the right to go back to her husband, who remains in East Jerusalem.

The French Foreign Ministry, along with the French embassy to Israel and the French consulate in Jerusalem have been pushing since January for Israel to allow Lefort back in East Jerusalem.

Lefort’s case was brought up during a session of the French National Assembly on Wednesday, in which Harlem Desir, the French Secretary of State for European Affairs, spoke of the government’s commitment to finding a solution to the matter.

“Since we have been informed (of the situation), the French Foreign Ministry had been completely mobilized in support of Mrs. Lefort,” Desir said. “We have and continue to ask tirelessly for Israeli authorities to go back on their decision.”

But Lefort and Hamouri have yet to see an encouraging sign regarding the evolution of their case.

According to Lefort, there remains a “taboo” in French diplomacy when it comes to dealing with Israel. This reluctance directly impacts the forcefulness of her government’s efforts in securing a solution to her case.

“We see how differently the cases of people who have had issues with authorities in Burundi and Nepal are treated compared to someone who has had issues with Israel,” she said, referring to incidents involving French citizens in the aforementioned countries which received sizable media and political attention in recent weeks.

“This isn’t very surprising, it’s a taboo as much in the media as at the diplomatic level. There is always this obstacle when it comes to Israel,” she added. “We have a very active popular support, just like we saw when Salah was in prison, but at the political and media level, it’s not at all the same.”

A ticking clock for East Jerusalem residency
A major concern for Lefort and Hamouri is that their child may not be born in East Jerusalem, which would deprive him of her of their status as resident of the city. “Even giving birth there doesn’t mean our child will be registered as such, simply because there are so many obstacles put in the way for children born in Jerusalem, but it’s even worse for those born outside,” Lefort said. “It’s the pressure of the occupation to try to kick us out, to force us to leave here,” Hamouri said. In 1967, after its takeover of East Jerusalem, Israeli authorities did a census of the Palestinian population residing in the city at the time -- excluding those who had fled during the Six-Day War -- and granted them the status of resident instead of citizens of Israel. Palestinian residents of East Jerusalem’s status is dependent on having been born in the city, but can be revoked for a number of reasons once a child reaches the age of 14.  Since 2003, Israeli legislation has frozen reunifications for families where some members come from the West Bank or Gaza and others are residents of East Jerusalem or have Israeli citizenship, affecting thousands of families. In a 2015 report, human rights organization Saint Yves slammed the Israeli Ministry of Interior’s “arbitrary procedures of child registration.” The organization added that the stringent Israeli legislation surrounding East Jerusalem residency meant that “with every passing year, the Ministry gets closer to achieving its ultimate goal: ridding the city of its Palestinian population.” “I still have hope that this situation will be solved and that our family will be reunited again,” Hamouri said.  “It’s a daily psychological pressure. Elsa is eight months pregnant now, and she is in France dealing with all the complications of being a pregnant woman on top of this. She needs me and I need her.” Beyond their own family’s difficult circumstances, Lefort said she and Hamouri are well aware that their situation reflects the larger struggle of Palestinians in the holy city. “We want to shine a light on the treatment of Jerusalem Palestinians,” she said. “We are fighting to reunite our family, but we are not just fighting for ourselves. We want people to know what is happening in Jerusalem for things to change, and for injustice to be curbed.”
Topics : #Palestine #Israel #East Jerusalem #France #West Bank #Deportations #Residency #Lefort and Hamouri
Tweets by @EuroPalForum