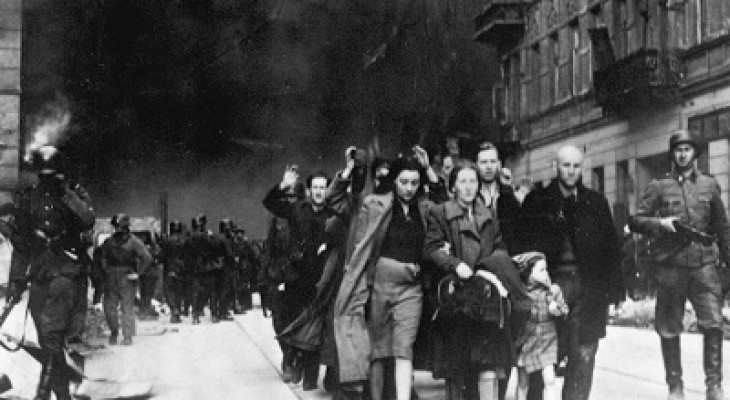 To be an effective activist it is important for me to understand the nature of human evil. In that endeavor, I was  drawn to read Hannah Arendt’s own discoveries about what she coined, ‘the banality of evil’ in her book, ’Eichmann in Jerusalem’ , reporting on the trial of Adolph Eichmann who oversaw the deportation of Jews to ghettos and concentration camps.

Arendt concluded that unspeakable evil is not committed by human monsters but by normal people in a systematic unthinking manner devoid of moral qualms and codes.

The concentration and repetition of this faux information on the masses leads to the normalization of war crimes, crimes against humanity, ethnic cleansing, torture, extrajudicial killings and genocide.

Here’s a small insight into how it works; take MK Yair Lapid, leader of the Yesh Atid party that is in coalition with Netanyahu’s Likud party. Lapid recently spoke to 30 EU ambassadors,

“We will never be like them [Palestinians], because Israel’s power comes first of all from its morality. The difference between us and our enemies is our values. That is why we can ask the world: Why are you continuing to embrace those who support vile murderers?”

Of course any intelligent person knows that in the laying waste of the rights of indigenous people of Palestine, Zionist ‘values’ are void of morality: the Zionist values of imprisoning and torturing children, of unjustified mass incarcerations, the Zionist value of apartheid, of demolishing homes, of stealing Palestinian land, of testing high-tech weaponry on Palestinian families trapped in the Zionist siege of Gaza.

Then there are the Zionist values of immolating a teenager and a sleeping Palestinian family, of destroying Palestinian agriculture and livelihoods, of the extrajudicial killings of youth throwing stones and carrying invisible knives, of deliberately blocking ambulances and paramedics to treat the wounded, of calculatedly bringing hunger striking Palestinian prisoners, such as Mohammed Al-Qiq,  to the brink of death before granting, if at all, a release from imprisonment for crimes never committed.

According to non-practicing Israeli, Dr Marcelo Svirsky, moral disengagement is rife among the occupiers,

“The majority of Jewish-Israelis do not critically reflect on their lasting commitment to their collective beliefs, ideas and practices and hence they do not take notice that these are vehicles of privilege and oppression. In other words, most Jewish-Israelis choose, unconsciously or not, to live in peace with the misery they cause.”  — ( After Israel: Towards Cultural Transformation)

And when Palestinians show true values of sumoud – steadfast and courageous resistance to Zionist ‘values’ and violence, they are falsely labelled ‘terrorists’ or ‘vile murderers’.

On reading Arendt, I wonder if the Zionist deprecation of Palestinian resistance is rooted in deep shame. Arendt points out that the Eichmann trial revealed the shocking extent of the collaboration of Jewish leaders (Judenräte) with Eichmann and the Nazis and their knowingly withholding from fellow Jews the horrific consequences of deportation to the concentration camps.

“What was new and especially provocative in Arendt’s account was the insistence on challenging Jewish communal leadership. What might they have done differently? Her answers, offered only tentatively, derived from her view of the function of truth in politics. Should the Judenräte have told the Jews the truth, when they knew it, about where they were being deported to? How many might have been able to save themselves somehow had they known the truth? Why were the Judenräe notables so disciplined and servile to authority?”

“Insofar as they had moral authority, why didn’t’t they advise the Jews to run for their lives or try to go underground? If there had been no Jewish organizations at all and no Judenräte, Arendt suggested, the deportation machine could not have run as smoothly as it did.”

“If the Judenräte had not been so “Germanically” disciplined, if they hadn’t compiled detailed lists of potential deportees, if they hadn’t supplied the Nazis with these lists, if they had refrained from collecting the keys and detailed inventories of vacated apartments for the Nazis to hand over to “Aryans,” if they hadn’t summoned the deportees to show up on a certain day, at a certain hour, at a certain railway station with provisions for a three- or four-day journey, would fewer people have died? Others had asked such questions before. But Arendt went further, implying that Jewish leaders had inadvertently allowed themselves to fall into a fiendish trap and become part of the system of victimization.”

In effect, the Judenräte’s, i.e. mainly Zionist Jews, collaboration with the Nazis contributed to Jewish deaths and crushed resistance like the undermining the Jewish boycott in the USA of Nazi products which was undermined by,

“There existed in those first years a mutually highly satisfactory agreement between the Nazi authorities and the Jewish Agency for Palestine—a Ha’avarah, or Transfer Agreement,  which provided that an emigrant to Palestine could transfer his money there in German goods and exchange them for pounds upon arrival. It was soon the only legal way for a Jew to take his money with him (the alternative then being the establishment of a blocked account, which could be liquidated abroad only at a loss of between fifty and ninety-five per cent). The result was that in the thirties, when American Jewry took great pains to organize a boycott of German merchandise, Palestine, of all places, was swamped with all kinds of goods “made in Germany.”

Nevertheless Jews resisted the Nazi scourge by way of armed Jewish partisan groups, uprisings in the Treblinka and Sobibor camps, rebellions in ghettoes including the famous Warsaw Ghetto (wherein, shock-horror, food was smuggled through underground tunnels! ),

“The glory of the uprising in the Warsaw ghetto and the heroism of the few others who fought back lay precisely in their having refused the comparatively easy death the Nazis offered them—before the firing squad or in the gas chamber. And the witnesses in Jerusalem who testified to resistance and rebellion, to “the small place [it had] in the history of the holocaust,” confirmed once more the fact that only the very young had been capable of taking “the decision that we cannot go and be slaughtered like sheep.”

The glorious resistance of the young calls to mind the present Palestinian youth Intifada against 68 years of Zionist brutality at the hands of holocaust survivors and worshippers and against the 21 years of Palestinian Authority/PLO collaboration ( like the Judenräte)  with the Zionists that has facilitated the growth of Zionist colonial expansion and the crushing of Palestinian resistance.

Undaunted, Palestinian resistance is in the breath of daily life under the Zionist jackboot; going to school is an act of resistance where children are harassed by the savagery of the deviant Zionist colonists who prey on them like wild jackals. These deviants reflect the pathological sickness that is Zionism.

Resistance illuminates the dignified ultimatum of Palestinian hunger-striking prisoners, Al-Issawi, Adnan and Al-Qiq, for freedom or death, resistance is heard in the dangerous digging of life-blood tunnels, resistance raises money by impoverished Palestinians to rebuild the demolished homes of martyrs, it is smelt in the baking of bread and felt in the shaking of olives from ancient trees, in the indefatigable care and courage  by doctors, paramedics and rescuers during the 51 day Zionist onslaught of Gaza and in the soothing of terrified children traumatized by drones, bombs and ubiquitous death.

There was a tremendous uplift of pride for the young Gazan men who valiantly resisted the military might of Operation Protective Edge in 2014. That spirit is being acted on by Palestinian youth today while the leaders squander Palestinian dignity and the crucial strategy of unity by either collaborating with the Zionists or crawling on their knees to Arab states that don’t give a damn about Palestine.

So how can we resist the banality of evil to protect the rights of Palestinians and further peace in Palestine for all?

Zionist values and the hasbara machine dread empathy. Empathy engages with suffering and survivors of Nazi atrocities and their descendants have the priveleged capacity to realize there is no difference  between suffering under the Nazi or the Zionist jackboot – both of which made and make strides because the machinations of moral disengagement duped the German people back then, just as the Jewish people are duped today along with British, Canadian, American, European, Australian citizens whose governments grant impunity to the Zionist scourge in Palestine.

Empathy is power. Empathy’s identification and connection with the Other evokes profound understanding of the interdependence of humanity which transforms moral concern into actions, like BDS, that, individually and communally, can defeat moral disengagement and the banality of evil.