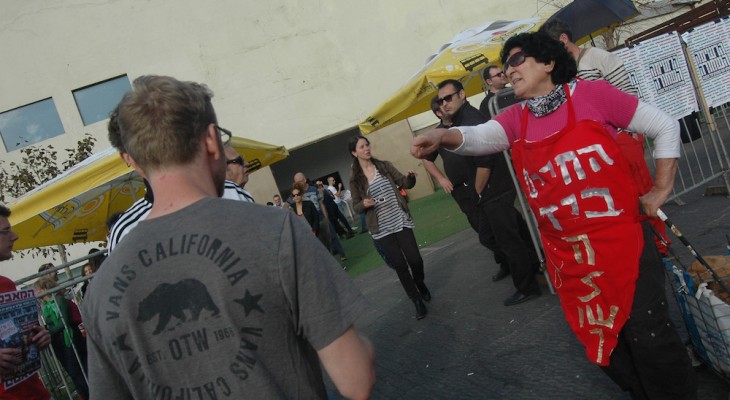 Old battles between Israel’s right and left are playing out inside of the government and on the streets of Tel Aviv, amid a Knesset discussion on sanctioning left-wing groups. The NGO transparency bill proposed last November by right-wing minister of Justice Ayelet Shaked would require organizations that receive funds from foreign donors to disclose the sources on materials presented to the government.

In practice the bill exclusively affects left-wing and human rights groups. Right-wing groups too are funded by foreign entities, but they typically receive financial backing from private individuals. There is no reporting requirement on these endowments.

“The logic behind this law as we see it, or the impact won’t be to raise transparency into our funding because our funding is totally transparent,” said Yuli Novak, the director of Breaking the Silence, an organization that collects the testimonies of former soldiers who served in the occupied Palestinian territories. “It’s about delegitimizing our work, because the transparency is already there.”

In December, Breaking the Silence emerged as the focus of the left-right Israeli fight. The group was banned from speaking in schools—“which is a total spin because we weren’t even working there,” said Novak—and denounced by Prime Minister Benjamin Netanyahu on the Knesset floor. He said Novak’s group “slanders soldiers worldwide and works to tie the hands of the state of Israel when it defends itself, which defames the state of Israel.”

Then came the revelation that two undercover right-wing activists had infiltrated Breaking the Silence, secretly recording meetings and social gatherings with the group’s leaders. Novak was astonished. The rift between the right and left seemed to cross a tipping point.

“People I thought were my friends actually recorded me in private houses, in private meetings, so this is a new method that we didn’t know went this far,” she said.

In January the pro-settler group Ad Kan announced it had planted these activists inside of the left-wing groups in order to “expose” them as acting against the state’s interest. So far two leftwing Israelis and one Palestinian have been arrested in the fall out. Another right-wing group, Im Tirtzu, called left-wing artists “foreign agents” in a similar video release, then defended its reel with a positive comparison to Joseph McCarthy–” you can’t help but be in his favor,” tweeted Im Tirtzu’s founder Avishai Ivri.

“It’s not only about this law, it’s about the campaign that has taken place over the past two months against Breaking the Silence and other human rights organizations,” said Novak, “It makes it harder for us to do our work, to interview soldiers and show the public what is really happening in the territories.”

Many of the organizations affected by the bill—The New Israel Fund, Peace Now, and Breaking the Silence—have U.S. partners, and all of these organizations are granted monies from foreign governments, predominately allies of Israel in Europe and North America. In its original reading the legislation called for representatives from these groups to wear special badges when inside of Knesset, which caused a political storm due to the the association with Nazi ordered star-badges on Jews in Europe.

The badges provision, the most controversial element of the bill, was dropped in committee; but the NGO transparency bill is moving along in Knesset. It is expected to face the first of three votes next week.

A rival transparency bill was introduced by the opposition Zionist Camp’s Tzipi Livni at the beginning of February. It would require reporting for both left and right groups by requiring private disclosures, too. The religious newspaper Hamodia reported that the bill failed by a close vote, even though 90-percent of NGO funding comes from private sources.

“The goal of delegitimization is to eventually make it more and more difficult for us to function. So I have no doubt if this [bill] doesn’t work that some people will try to think of something else,” said Rabbi Arik Ascherman, head of Rabbis for Human Rights, one of the many left-wing organizations affected by the transparency bill.

“It’s a process that started with the first war in Gaza [2008],” Ascherman said. “Up until then if people didn’t agree with us, they still had respect for us.”

Ascherman spoke Friday as he packed up his informational booth at a Tel Aviv event intended to show the left is still active in spite of the legislation. The event was titled, “Blacklisted: a show with a glimmer of hope.” Rabbis for Human Rights and 40 other human rights groups held a music festival inside of the upscale port shopping district on the Mediterranean Sea. Around 1,000 turned up.

“We are proud Israelis and we are proud of what we do, and I do hope that sends a message to our fellow Israelis,” Ascherman said, “The bottom line is only peace organizations and human rights organizations are getting money from foreign governments. Everybody gets money from individual donors from foundation, so it’s a cheap shot to only attack our sources of funding.”

Yet his message fell flat on Israelis with opposing views. Outside the venue’s security checkpoint, a family of right-wing Israelis protested. They said the left-wing groups hurt Israel’s image abroad and “support terrorism” domestically.