The Logic of Hunger Striking Palestinians: When Starvation Is a Weapon. By: Ramzy Baroud 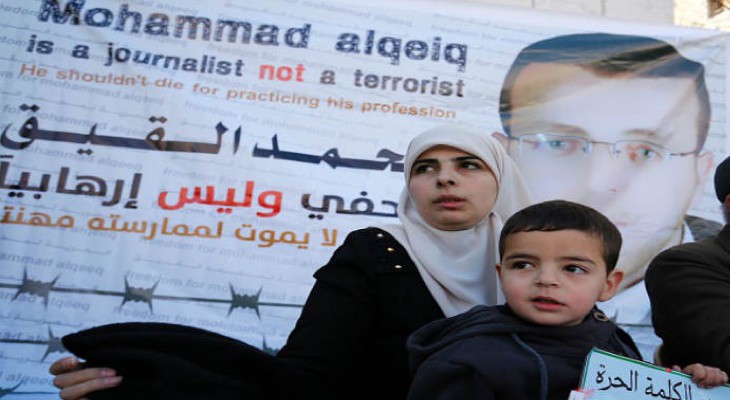 By Friday, January 29, Palestinian journalist Mohammed al-Qeq had spent 66-days on hunger strike in Israeli jails. Just before he fell into his third coma, a day earlier, he sent a public message through his lawyers, the gist of which was: freedom or death.

Al-Qeq is 33-years of age, married and a father of two. Photos circulating of him online and on Palestinian streets show the face of a bespectacled, handsome man. The reality though is quite different. “He’s in a very bad situation. He fell into his third coma in recent days, and his weight has dropped to 30 kilograms (66 pounds),” Ashraf Abu Sneina, one of al-Qeq’s attorneys, told Al Jazeera. Al-Qeq was arrested under yet another notorious Israeli law called the ‘administrative detention’ law.

Ominous predictions of al-Qeq’s imminent death have been looming for days with no end in sight to his elongated ordeal. Unfortunately for a man who believes that the only tool of defense and protest he has against apartheid Israel is his body, the Red Cross and other international groups took many days to so much as acknowledge the case of this news reporter who had refused food and medical treatment since November 24, 2015.

Al-Qeq, works for Saudi Arabia’s Almajd TV network and was arrested at his home in Ramallah on November 21st. In its statement, issued more than 60 days after he entered into his hunger strike, ICRC described the situation as ‘critical’, unequivocally stating the reality of Al-Qeq’s “life being at risk.” On January 27, the European Union also expressed its view of being “especially concerned” about al-Qeq’s deteriorating health.

Under the ‘administrative detention’ law, Israel has affectively held Palestinians and Arab prisoners without offering reasons for their arrests, practically since the state was founded in 1948. In fact, it is argued that this law which is principally founded on ‘secret evidence’ dates back to the British Mandate government’s Emergency Regulations.

After Israel occupied the West Bank, Gaza and East Jerusalem in 1967, it clutched at straw in its desperate efforts to find whatever legal justifications it could for holding prisoners without trials. These efforts were eventually articulated in the Israeli Law on Authorities in State of Emergency in 1979.

This law was some sort of compromise between the internal intelligence (Shin Bet), the state and the court system, with the ultimate aim of providing the façade and apparent backing of a legal cover for what is considered in international law and most country laws as illegal. The Shin Bet was thus allowed to use whatever coercive measures – including physical and psychological torture – to exact ‘forced’ confessions from Palestinian prisoners over the course of six months, renewable by a court order without trial or charges.

Khader Adnan, 37, from Jenin, was held under administrative detention law for years. Israeli intelligence had no evidence to indict him of any particular charge, despite accusations that he was a valued member of the Islamic Jihad organization. He was set free on July 12, 2015.This occurred only after he too resorted to undergoing several hunger strikes, and two particularly long ones: early in 2012 a hunger strike lasted for 66 days, and another, in May 2015, lasted for 56 days.

Each time, Adnan reached the point where death, as is the case for al-Qeq, was also becoming a real possibility. When we asked him what compelled him to follow that dangerous path twice, his answer was immediate: “repeated arrests, the savagery of the way I was arrested, the brutality of the interrogation and finally the prolonged administrative detention”- without trial.

Administrative detentions are like legal black holes. They offer no escape routes and no rights for the prisoner whatsoever, but wins the interrogators time to break the spirit of the prisoner, forcing him or her to surrender or even admit, under torture, to things that he or she never committed in the first place. “It is our last and only choice,” says Mohammed Allan, 33, from Nablus, who underwent a hunger strike for so long that it resulted in brain damage, and nearly cost him his life.

“When you feel that all the doors are sealed, and you stand there humiliated and alone, knowing in advance that the court system is a charade, one is left with no other option but a hunger strike,” he says.

“First, I made my intentions clear by refusing three meals in a row, and by sending a written note through the Dover (Hebrew for a prisoner who serves as a spokesperson for a prison ward).” Then, the punishment commences. It is like a psychological warfare between the prison authorities, state and legal system apparatuses against a single individual,” which, according to Allan lasts for 50-60 days.

“Almost instantly, a hunger striker is thrown into solitary confinement, denied access to a mattress and blanket and other basic necessities. Only after six weeks or so, do Israeli prison authorities agree to talk to lawyers representing hunger strikers to discuss various proposals. But within that period of time, the prisoner is left entirely unaided, separated from the other prisoners and subjected to an uninterrupted campaign of intimidation and threats. Mental torture is far worse than hunger,” says Allan.

“You cannot even go to the bathroom anymore; you cannot stand on your own; you are even two weak to wipe the vomit that involuntarily gushes out of your mouth into your beard and chest.”

Allan almost died in prison, and despite a court order that permitted prison authorities to force-feed him (a practice seen internationally as a form of torture), doctors at Soroka hospital refused to act upon the instructions. In mid-August 2015, Allan was placed on life support when he lost consciousness. His severe malnutrition resulted in brain damage.

A third freed hunger striker, Ayman Sharawneh, originally from Dura, Hebron, but who has been deported to Gaza, describes hunger strikes as the “last bullet” in a fight for freedom that could possibly end in death. Sharawneh, like Adnan and others we talked to, was bitter about the lack of adequate support he received while dying in jail.

“All organizations, Palestinian or international, usually fall short,” he says. “They spring into action after the prisoner had gone through many days of torture.”

He says that 2 years and 8 months after he was deported to Gaza, he is experiencing severe pain throughout his body, particularly in his kidneys.

While undergoing the extended hunger strike “I started to lose my hair, suffered from constant nausea, sharp pain in my guts, threw up yellow liquid, then dark liquid, then I could hardly see anything. I had an excruciating headache and then I began to suffer from fissures all over my skin and body.”

He agrees with Adnan that ‘individual hunger strikes’ should not be understood as a self-centered act. “Mohammed Al-Qeq is not striking for himself,” says Adnan. “He is striking on behalf of all political prisoners,” whose number is estimated by prisoners’ rights groupAddameer at nearly 7,000.

According to Adnan, the issue of hunger strikes should not be seen as a battle within Israeli jails, but as part and parcel of the Palestinian people’s fight against military occupation.

While the three prisoners affirmed their solidarity with Al-Qeq, they called for a much greater support for the hunger-striking journalist and thousands like him, many of whom are held indefinitely under administrative detentions.

The list of well-known Palestinian hunger strikers exceeds Al-Qeq, Adnan, Allan and Sharawneh and includes many others, not forgetting Samir Issawi, Hana Shalabi, Thaer Halahleh and Bilal Thiab. But what all of these former hunger strikers seem to have in common is their insistence that their battles were never concerned with the freedom of individuals only, but of an entire group of desperate, oppressed and outraged people.