Is Gaza paying the price of the Cypriot-Israeli-Greek alliance?. Dr Saleh Al-Naami 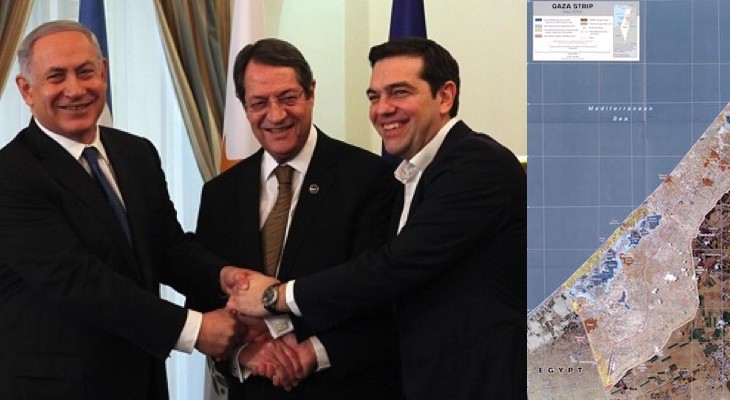 The Israeli, Cypriot, Greek summit held in Cyprus’s capital city, Nicosia, is another example of how Tel Aviv’s predictions regarding its gas discoveries on the eastern shores of the Mediterranean Sea were realised.

Tel Aviv had predicted that its huge gas discoveries in what it claims to be its “economic waters” would reinforce its geostrategic position, as well as its regional status. It also predicted that it would enable Israel to deepen its strategic partnership with the countries forming the Arab “axis of moderation”.

Cyprus and Greece agreed in the summit to market Israeli gas in Europe by transporting it through a large pipeline that would link Israel’s gas fields to Greece. From there, it will reach countries interested in importing it.

According to media reports, the cost of establishing this pipeline, which will be started soon, is about $6 billion.

Further suggestion of the serious steps being taken by the three countries in the context of their cooperation is their agreement to link the Israeli, Cypriot and Greek electricity networks. This ultimately aims to allow all three countries to rely on a joint electric network.

The tripartite summit and the resulting historic agreement occurred after a series of bilateral meetings between Netanyahu, Nicos Anastasiades and Alexis Tsipras in Tel Aviv, Nicosia and Athens.

Despite the fact that the summit was held in Nicosia, it was clear that Tsipras, who represents the radical left-wing in Greece, was the keenest on strengthening relations with Israel, as he visited Tel Aviv twice in less than two months.

Some Israeli commentators believe that Netanyahu will use the tripartite summit as a means of pressuring Turkey to back down from some of its conditions to normalise relations with Tel Aviv, especially in terms of the conditions for the export of Israeli gas through Turkey.

Professor Arye Mekel, a prominent researcher at Bar-Ilan University and former ambassador to Greece, said hostility towards Turkey is a common denominator amongst the countries that formed the alliance, which they announced last Thursday in Nicosia.

According to Mekel, Israel used the strategy of hinting to Cyprus and Greece that it would improve its relations with Ankara at their expense to convince the Cypriots and Greeks to strengthen their strategic cooperation with Israel.

It is clear that Israel used the fact that the Greek and Cypriot decision-making circles and political elites see Turkey as their top enemy to their advantage.

An indicator of Israel’s predictions being fulfilled in terms of its relations with Greece is the fact that the EU Greek representative led the opposition against the proposal to label goods produced in Jewish settlements in the West Bank when selling them in Europe.

It is worth noting that the Israeli minister of defence met with his Greek counterpart, Panos Kammenos, in Athens last week, and that on Wednesday, the Greek and Israeli governments held a joint meeting in occupied Jerusalem under the leadership of Netanyahu and Tsipras.

The new regional alliance also includes countries that did not participate in the meeting, including Egypt. It is important to note that the Egyptian-Cypriot-Greek summits held over the past two years compliment the summits which Israel participated in.

It is clear that Israel is interested in isolating Turkey economically and politically after establishing this four-party alliance.

The question that arises here is: Will the Gaza Strip, once again, pay the price of regional considerations? Has the four-party alliance drawn the curtain on the possibility of lifting the siege on the Gaza Strip once and for all?

It is difficult to answer these questions because there are many people within the Israeli elite who believe that lifting the siege on Gaza is in Israel’s best interest, as it reduces the chance of a new confrontation.