In the absence of unity, Palestinian resistance can’t compete with PA collaboration. By: Ramona Wadi 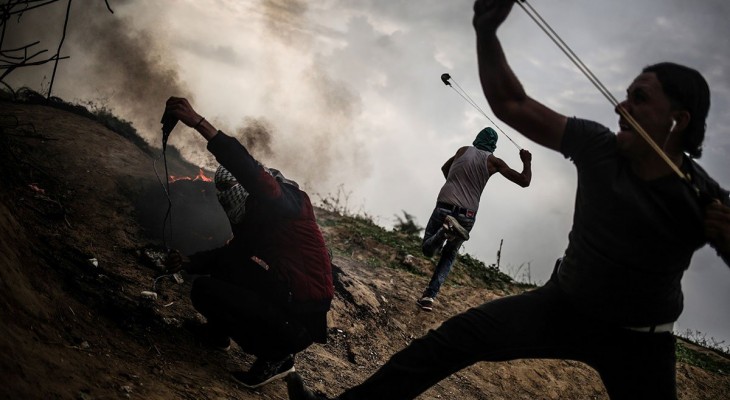 Following Israeli tantrums over EU plans to move ahead with the accurate and honest labelling of settlement products, Israeli Prime Minister Benjamin Netanyahu has been venting his spleen about purported anti-Israel bias, stating rather ambiguously that ties between Israel and the EU need to be “reset”.

According to Netanyahu, “there is a natural tendency in the EU establishment to single out Israel and treat it in ways that other countries are not being dealt with, and especially other democracies.” How many other neo-colonial countries maintaining a full military occupation are there for Israel to be compared with, we might ask.

Truth might be gleaned from his statement, although definitely not based upon what Netanyahu implies. Rather, it highlights the ongoing efforts to sustain Israel’s colonial project. A recent press release by the European Council regarding its conclusion about the Middle East Peace Process has once again placed the emphasis on futile diplomatic endeavours to address “the continuing cycle of violence”; while expounding upon the myth of “both sides” as equals, it sought repeatedly to insist upon the two-state compromise as the only possible future scenario.

“The EU is united in its commitment to achieving a two-state solution – based on parameters set out in the Council Conclusions on July 2014 – that meets Israeli and Palestinian security needs and Palestinian aspirations for statehood and sovereignty, ends the occupation that began in 1967, and resolves all permanent status issues in order to end the conflict,” the European press release declared.

In return for sticking to this, the EU has reiterated its previous offer of a “Special Privileged Partnership" for the two states, which includes political, economic and security support for the coloniser and the colonised, thus exhibiting Europe’s warped sense of equality.

The Palestinians, meanwhile, are facing a future in which alternatives are disappearing rapidly. Since October, the Palestinian Authority has intensified its security coordination with Israel, resulting in more arrests and extensive foiling of resistance projects; this was proclaimed proudly by the PA Head of General Intelligence, Majed Faraj, in an interview with Defence News. Almost simultaneously, chief negotiator and PLO leader Saeb Erekat repeated his recognition of Israel existing upon major swathes of historic Palestine.

Undermining Palestinian resistance, however, is an illusion confined to diplomatic circles, as statistics published by the Palestinian Centre for Policy and Survey Research (PCPSR) have revealed. Political alienation from the reality on the ground is still the lifeblood of the PA, which continues to thrive on illusions of negotiations and acquiescence to Israeli diktats. For Palestinians, the intifada has provided a pathway to resistance which is, shamefully, hampered by the PA’s security tactics, as well as by the lack of proper involvement from resistance factions.

According to the centre’s recent survey, 67 per cent of Palestinians support armed resistance against Israel’s brutal military occupation of their land. However, the lack of popular participation in the intifada, respondents believe, is largely due to “fear of the PA or the occupation”. With regard to the Oslo Accords, 67 per cent doubt Mahmoud Abbas’s repeated assertions that he is ready to abandon the agreements, while 64 per cent support the end of security coordination with Israel.

In the absence of a peace agreement, support for an armed intifada has increased, although 76 per cent of participants in the survey have also indicated support for joining more international organisations. The two-state paradigm is considered to be impractical by 65 per cent of Palestinians.

Given the level of concordance between Israel, the PA and the international community, realistically-speaking the Palestinians have no other option but resistance. However, even the concept of resistance is facing the possibility of being mellowed into a travesty of the term.

Despite its shortcomings, the PA has managed to instil a level of mistrust across Palestinian society. Resistance factions have been all too eager to issue statements without offering any semblance of proper organisation. In the absence of unity, the Palestinian resistance can’t compete with the collaboration of the PA, and international collusion, which is thwarting the anti-colonial struggle.