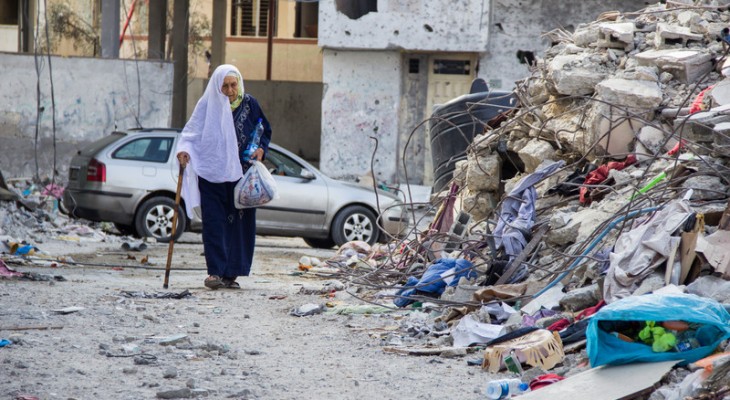 The UN was warned that its database of potential aid recipients in Gaza could provide Israel with targets for future attacks, a document obtained by The Electronic Intifada reveals.

Diplomats and UN officials were also warned that plans for rebuilding Gaza after it was attacked by Israel in 2014 violated international law.

The UN-backed Gaza Reconstruction Mechanism (GRM) is illegal and violates the very “right to life” of the Palestinian people, according to a confidential legal opinion by a law professor who analyzed the mechanism for a major aid agency that works closely with the UN.

The Electronic Intifada is publishing the full text of the GRM for the first time, along with the legal opinion. Bothdocuments are below.

Recall that in 2014, The Electronic Intifada revealed that the GRM, the UN-brokered agreement that was supposedly going to facilitate reconstruction, would effectively reinforce Israel’s control over Gaza.

But the UN, the Palestinian Authority and Israel have kept the actual text of the GRM secret, despite demands for transparency from Palestinians whose ability to rebuild their lives has remained hostage to its suffocating restrictions.

The expert who wrote the legal opinion, the University of Nottingham’s Professor Nigel White, warned that the UN was becoming an active participant in Israel’s crimes, including enforcing the blockade Israel has imposed on Gaza since 2007.

White, co-director of the Nottingham International Law and Security Centre, is considered one of the world’s leading experts on United Nations law.

“The UN, by becoming party to the GRM, is itself contributing to the maintenance of the blockade and, therefore, is committing as well as aiding and assisting violations of international law,” White states.

“If the UN persists in aiding and assisting the implementation of the GRM it will be jointly (with the GoI [Government of Israel]) responsible for the injuries and losses caused to the people of Gaza,” White adds.

White warns that the database of personal details of Palestinians in Gaza created under the terms of the GRM violates the “right to life” because of “potential misuse of the database by the GoI [Government of Israel] for the identification of targets.”

The legal opinion was commissioned by the Diakonia International Humanitarian Law Resource Center, which is funded by the Swedish and Swiss governments. It is part of Diakonia, a major Swedish development organization that receives funding from the Swedish government, the EU and the UN.

The legal opinion was shared with diplomats and international agencies. But unlike other expert opinions commissioned by Diakonia, the organization has not published White’s analysis.

Diakonia did not respond to an email requesting comment.

The stark and shocking nature of the legal advice might explain why the GRM has been kept secret from its supposed beneficiaries. Had the legal opinion been published it would have seriously undermined UN assurances and claims about the GRM.

In the summer of 2014, Israel’s assault on Gaza killed more than 2,200 Palestinians.

The Israeli invasion and bombardment destroyed or severely damaged 24,000 homes and caused lesser damage to another 146,000, according to the UN monitoring group OCHA.

After the 26 August 2014 ceasefire, Robert Serry, then UN special coordinator for the Middle East peace process (UNSCO), negotiated the Gaza Reconstruction Mechanism between Israel and the Palestinian Authority.

The deal was effectively dictated by Israel according to its “security” requirements and then given a stamp of approval by the UN and the PA.

Under the guise of reconstruction, the UN monitors and gathers detailed private information about Palestinian households in a database accessible to Israel, which has a veto over who is eligible to sell and receive building materials.

But despite promises that the deal would at least allow Palestinians made homeless by Israeli bombing to quickly rebuild, the mechanism has failed.

The GRM placed enormous obstacles in the way of reconstruction such that by November 2015 the UN had only managed to assist the reconstruction of a single totally destroyed house in Gaza.

Building supplies are doled out based on Israeli approval, under extreme security and in such small quantities that they are often more valuable to desperate Gaza families to sell on the black market than for any use in reconstruction.

The GRM continues to give Israel a stranglehold on Gaza’s economy.

In a 21-page analysis marked “confidential” and dated 26 January 2015, Nigel White examines the legal basis of the Gaza Reconstruction Mechanism and concludes that the document amounts to an agreement or treaty that must be subject to the norms of international law.

The GRM, White states, is “an unbalanced exchange of ‘rights’ and ‘duties,’ with the PA and the UN having a number of duties, while the GoI [Government of Israel] has a number of very wide rights and very few obligations.”

According to White, UNSCO went far beyond its legal mandate and may have breached the UN Charter by making the agreement.

White suggests that the GRM would be “void” if it violates international law, or was reached “as a result of it being procured by the threat or use of force or by other forms of coercion” – a reference to warnings that Israel could resume its military action against Gaza.

“As well as issues of legality under UN and treaty law,” White writes, “there is the question of whether, by incorporating processes that are in violation of Israel’s obligations under international humanitarian and human rights law, the UN, by becoming a party to the GRM and agreeing to oversee these processes is implicated in any wrongful acts.”

“There is strong evidence of the connection between the GRM and actual and potential violations of core human rights,” White states.

By signing the agreement, the UN and PA have approved the continuation of Israel’s blockade on Gaza, which White describes as illegal.

But despite this, the UN remains committed to the deal.

UNSCO refused to confirm or deny that it had seen Nigel White’s paper.

Instead of answering a direct question as to whether Serry, or his successor as special coordinator Nickolay Mladenov, had seen the legal advice commissioned by Diakonia, UNSCO sent The Electronic Intifada a 350-word statement defending the GRM and bemoaning the shortfall of donor funding for Gaza reconstruction.

Nonetheless, UNSCO put a rosy gloss on the GRM, asserting that it “has enabled some 100,000 families to repair their homes, while some 4,500 families are in the process of reconstructing their fully demolished dwellings.”

Asked why it had not published the text of the GRM itself, UNSCO referred The Electronic Intifada “to the relevant governmental authorities as we are not in a position to disclose the text unilaterally without the consent of both the Government of Israel and the Palestinian Authority.”

“The GRM is a temporary arrangement,” UNSCO asserted, “It is not and can never be considered as a substitute for the lifting of the closures on Gaza.”

But in the absence of any meaningful pressure on Israel to lift the siege, or consequences for its refusal to do so, the GRM is likely to become as “temporary” as Israel’s occupation of the West Bank and Gaza Strip that has lasted for almost 50 years.

Little did they know that while claiming to be helping, UN officials had made an illegal deal that has only prolonged their suffering and extended Israel’s impunity and control.

It may even put their lives in danger in the event of future Israeli attacks.

Those involved, including of course the Palestinian Authority, have tried to evade accountability by concealing the GRM behind a wall of secrecy.

With the publication of these documents, that secrecy has now ended and those complicit in this deal must answer for what they have done.