“Ethical” Co-op Bank leaves Palestinian cause in the lurch. By: Stuart Littlewood 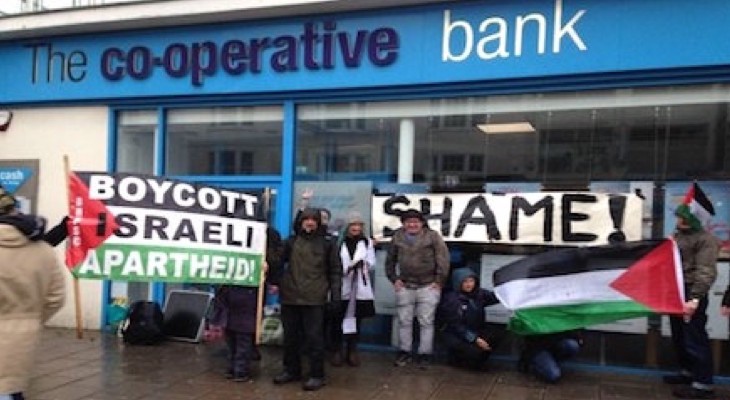 Several organisations in the UK that support Palestinians in their struggle for freedom are reported to have had their accounts frozen or closed by the Co-op Bank or been threatened with the chop.

The bank until recently was part of the well-regarded Co-operative movement and famed for its business ethics. After running into financial difficulties it was rescued in 2013-14 by, among others, US hedge fund outfit Perry Capital, which now has a seat on the board. According to Wikipedia, billionaire Richard C. Perry has served as a director of The Israel Project.

Friends of Al-Aqsa (FOA) is one of the bank’s victims. The organisation describes itself as “a UK based non-profit making NGO concerned with defending the human rights of Palestinians and protecting the sacred Al-Aqsa Sanctuary in Jerusalem”. It says the bank claims to have conducted “extensive research” into the work the FOA do but hasn’t invited them to supply information direct. “In spite of this ‘research’ they also describe us as a charity which FOA is certainly not,” says the NGO’s chairman, Ismail Patel. “We have had a very good relationship with the bank for 10 years. We do not transfer funds abroad and we have never been overdrawn.”

Although the FOA website states that the Co-op Bank has closed the group’s account, the FOA chairman tells me it will still operate until 23 February. Has he found a replacement bank? No, they have been turned down by all those approached, even the Islamic banks. So has he reported what the FOA believes to be institutional bullying and racism to the Financial Conduct Authority and the Financial Ombudsman? Yes, but with no result, possibly due to the length of time it takes for complaints to be dealt with (the reason was not clear in our conversation over a poor telephone line).

All this is scarcely believable. If true, it is deeply worrying. And why is the Muslim cavalry not riding to the rescue?

Another organisation to have fallen foul of the Co-op Bank is the Palestine Solidarity Campaign (PSC). Its main account, and the accounts of many of its local branches, have been closed down with no reason given other than citing “the bank’s risk appetite”. However, after receiving a legal letter from PSC the bank did say that “for customers who operate in, or send money to, high risk locations throughout the world, advanced due diligence checks are required by all banks to ensure the funds do not inadvertently fund alleged or proscribed activities”.

PSC says all its campaign work is based in the UK: “We do not finance or run projects in the West Bank, Gaza or other parts of the world.” It insists there is no reason for the PSC to have failed the bank’s due diligence test and although the Co-op promised a substantive response it hasn’t produced one. So, the PSC remains none the wiser. In the meantime, it has opened facilities with the Unity Trust Bank, which specialises in unions, charities, social enterprises and the like, and is discussing next steps against the Co-op Bank with its legal team.

So is this aggravation just a bit of political mischief-making or something more serious? Let us go back to The Israel Project, to which the Co-op Bank now has links, it seems, through Perry Capital. The Israel Project (TIP) is a US media advocacy group that claims to be “devoted to educating the press and the public about Israel while promoting security, freedom and peace”. It provides journalists, leaders and opinion-formers with “accurate information about Israel”.

It also describes itself as a “non-partisan” one-stop information source on Israel and the Middle East. So non-partisan is TIP that in 2009 it produced a training manual titled Global Language Dictionary to help the worldwide Zionist movement win the propaganda war. The manual teaches Israel’s hasbara (propaganda) recruits how to justify the illegal occupation of the Holy Land, the slaughter, the ethnic cleansing, the land-grabs, the cruelty and the blatant disregard for international law and UN resolutions – and, in particular, how to demonise Hamas and Iran – and how to make it all smell sweeter with a liberal squirt of persuasive language. It is designed to hoodwink gullible Americans and Europeans into believing that we actually share values with the racist regime in Tel Aviv and that its behaviour deserves our support.

The TIP manual runs to 116 pages and recycles many of the discredited techniques used by the advertising industry before standards of honesty, decency and truthfulness were brought into protect the public. It is a masterpiece in distortion intended to undermine with clever words the inalienable rights pledged by the UN and the world’s civilised nations to all peoples everywhere, including the Palestinians – rights that still have to be fought for by organisations such as Friends of Al-Aqsa and the PSC.

This weekend activists have been called on by the FOA and the Scottish PSC (not to be confused with the PSC south of the border) to demonstrate in several cities urging the Co-op Bank to “reverse their decision to close our account”. But why? Knowing the new situation, they’d surely wish to drop the Co-op Bank like a hot potato, assuming they can move their money to an alternative like Unity Trust.

It appears to me that a certain major shareholder at the rejigged Co-op Bank, believing that some of its customers would soon sniff out the Zionist connection and cause embarrassment saying their noisy goodbyes, decided to beat them to the punch, seizing upon the war on terror as a feeble excuse and pleading a delicate “risk appetite”.

So, are those brave demonstrators standing around in the cold and wet chanting the right message?