Terrorism as defined by Israel. By: Dr Fayez Abu Shamaleh 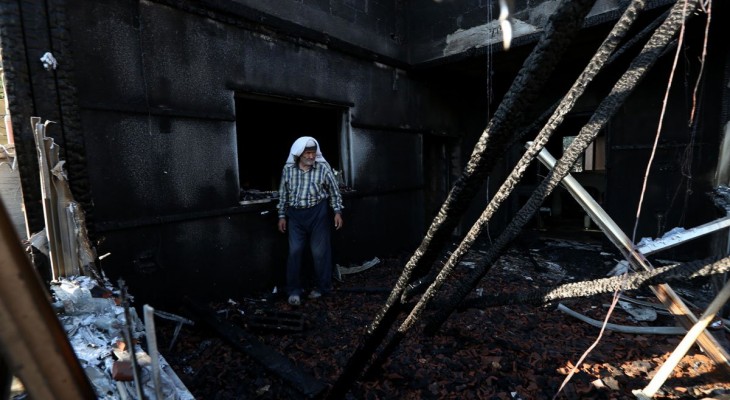 The burning to death of the Dawabsheh family in July created a conflict between the Israeli Shin Bet internal security agency and the Jewish settlers who sympathised with those who carried out the deadly arson attack.

While the Shin Bet knows how dangerous the extremist Jewish groups are and the consequences of their heinous acts that reflect on the existence of the state itself, the rabbis and settler leaders continue to attack the agency and accuse it of using force and violence against the Hilltop Youth and students of religious schools in order to gain information from them.

The conflict between the two sides reached its climax when the Shin Bet sought to bring Israeli society’s attention to what was going on in the West Bank settlements, including attempts to revolt and rebel against the state’s decisions; it leaked a video known as the “blood wedding” to Israel’s Channel 10.

The security agency did so despite knowing the damage that broadcasting the video would have on Israel’s position internationally. However, at the same time, the Shin Bet also realised that Israel’s domestic interests are more important than its external status.

The blood wedding video was a shock to Israeli society and its political leadership, and people from across the spectrum condemned it, as they now fear that Jewish terrorism, sponsored by ministers in the current government and rabbis, will increase. This was stated by Minister of Defence Moshe Ya’alon, who expressed his fear of extremism for the future of Israel and its unity and stability.

This drove Education Minister Naftali Bennett to reassure the extremists that they possess the reins of political decisions in Israel, and that he personally, and his extremist colleague, Ayelet Shaked, the Minister of Justice, would support them: “So what more could you want at this time?”

After giving his support to the settlers, Bennet then released a statement apparently intended to mollify world opinion, in which he gave a textbook definition of terrorism along with condemnation of the Dawabsheh arson attack. “[Terrorism is] the use of violence against civilians in order to advance a political goal, or heaven forbid, to stage a coup. All the conditions I just describe apply to Duma. It was use of force – the worst kind, burning a family alive in its sleep – to advance a political goal or to force the state’s hand. In this case the goal was much deeper – to dismantle the state.”

The minister’s admission that killing the Dawabsheh family was an act of terrorism by Jews does not mean that justice will be served or that the entire state will be accused of terrorism. It only aims to protect the state by directing accusations at those who want to overthrow the structure of the state, its ability to rule, and to build a new establishment. “See, the murder in Duma was just a means,” said Bennett. “They want to bring down the house on our heads. That is their goal. It is antithetical to the substance of religious Zionism. They want to dismantle the State of Israel. They are terrorists, and the government made the decision to treat them as such.”

In the same context, journalist Israel Harel wrote in Haaretz newspaper, “Only in the technical sense are the Duma murders, the arson cases that preceded them, the destruction of mosques and other hate crimes ‘criminal acts’. Basically they are terror acts. Based on political-religious motivations, their end – banishing the Arabs from the land – justifies the means, including, it’s a fact, murdering babies.”

He also wrote that Minister Dani Dayan warned against this and said that the crimes of these youth pose a greater danger to the future of the settlement project than Arab violence does, but despite this, we only hear “feeble, sometimes sanctimonious denunciation”, from the rabbinical establishment.

We, the Palestinians, have not heard any new political positions from the Palestinian leadership that address the content of this Jewish definition of terrorism. Certain positions should be taken based on this.

For a start, the Palestinians should withdraw recognition of the State of Israel, the state that was established on terrorism and achieved political goals by means of massacres, murder, expulsion and the seizure of dozens of Palestinian villages and cities. It is enough for the Palestinian leadership to revise the British Mandate files in order to cite dozens of documents proving this.

Secondly, we need an understanding that the current Israeli government is dominated by right-wing Jewish extremists, who are the rising force. Hence, Netanyahu’s rejection of the idea of negotiations with the PA stems from his accurate evaluation of the Jewish far-right, which are now the decision-makers in the occupied West Bank. They will not allow any force on Earth to discuss the borders of the Palestinian state, which have now become settlements housing hundreds of thousands of Jewish extremists.

Acknowledging these facts is the painful first step towards correcting the path and moving towards action against the extremists.