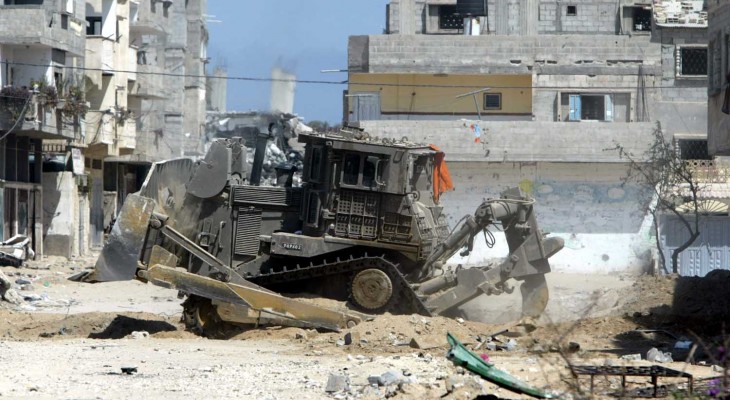 “Punitive” demolitions, which have become a trademark of Israel’s latest round of repression against the Palestinians of the Occupied Territory, are not only a pointless lashing out against defenseless families, but are downright counterproductive, even by Israel’s own standards. Since 1967 the Israeli authorities have demolished some 46,000 Palestinian homes in the OPT, either as “collateral damage” in military incursions (18,000 were destroyed in Gaza during the 2014 attack) or because, since 1967, Israel has refused to grant building permits to Palestinians, who are then forced to build “illegally” and face demolition. In virtually none of these cases was “security” the reason for demolition, as testified by the fact that none of the owners were ever arrested.

A third category of demolition is “punitive,” the idea being that Palestinians hold their homes sacred, so if a terrorist knew his or her family’s home would be destroyed if he or she committed an attack, it would act as an effective deterrent. In fact, it grew out of the British Emergency Regulations of 1945, referred to as “Nazi” regulations befitting totalitarian regimes by none other than Menachem Begin, who tried to have them cancelled during his years in the Knesset. When Prime Minister Moshe Sharett argued that “all laws are laws,” Begin replied:

Nonetheless, hundreds of homes were demolished under this policy in the Occupied Territory, many of them while Begin himself was in power. Between 2001-2005, according to B’tselem figures, 664 Palestinian homes were demolished as forms of punishment. Some 4,182 innocent people were displaced, many of them neighbors of the suspect’s family, and this often on the basis of suspicion alone. This policy of collective punishment without any due process of law was blatantly illegal on both counts.

In February, 2005, a military committee convened by then-Chief of Staff Moshe Yaalon and headed by Major General Udi Shani, concluded not only that the policy of punitive demolitions was ineffective in deterring terrorism, but it actually incited additional attacks. The Chief Military Advocate General, Brigadier General Avi Mandelblit, formally announced that the policy would be discontinued.

Until today. Nothing has changed. Mandelblit has been nominated Israel’s next Attorney General (!), Yaalon is the Minister of Defense and no new information has come to light attesting to the effectiveness of punitive demolitions. After Yaalon ordered the demolition of entire apartment buildings housing the families of those accused of killing the three settler youth last year, Hamoked, an Israeli rights organization, filed three separate petitions in the Israeli High Court, arguing that “demolishing a family home was a cruel and inhuman act of doubtful efficacy, and that demolishing the homes of the suspects’ families constituted a deliberate attack against innocent people, in violation of international humanitarian law, which prohibits collective punishment and destruction of property.”

HaMoked also noted that the planned demolitions did not meet the test of proportionality even of the draconian Regulation 119 of the Defense (Emergency) Regulations of 1945, which sanctions such punishment. Finally, HaMoked objected to the demolitions because the Israeli military only “uses the regulation only when the attacker is a Palestinian and the victim is a Jew, demonstrates extreme discrimination.”

The High Court of Justice’s rejection of HaMoked’s arguments in favor of the Israeli military not only represented a continuation of collective punishment policies and the suppression of basic human rights granted to the Palestinians under international law, but also delivered a blow to the rule of law by setting dangerous precedents and perpetuating a dual-system of law for Israelis and Palestinians. The High Court Justices Yoram Danziger, Issac Amit, and Noam Sohlberg (the last a settler) ruled against all evidence, including that of the IDF itself, that the demolitions were essential to deter acts of violence – particularly given “the significant deterioration of the security situation.”

Of course, as the legal unit representing the Palestinians argued, the ruling is discriminatory in that Israel does not demolish the homes of Jewish terrorists, as evidenced most starkly by the case of those arrested for brutally murdering Mohammed Abu Khdeir, the Palestinian teenager who was kidnapped, forced to drink flammable liquids and burnt alive in early July. Yosef Haim Ben-David, an Israeli from the illegal settlement of Adam in the West Bank, explicitly stated in his confession to the kidnapping and murder that, “We planned to hurt a soul, meaning to kill… to torture him and kill him,” and continued on to say that, “to [let Muhammad Abu Khdeir know] that he was about to die as a sacrifice for the Jews that were murdered.”

In reference to the demand to demolish the houses of the Jewish terrorists (an act, it should be noted, that ICAHD would also oppose), Justice Danziger responded, “I’m not overlooking the shocking case of the murder of the teenage boy Mohammed Abu Khdeir, a case that shocked the country and sparked wall-to-wall condemnations, but this was the rarest of rare occurrences.” Rare? Since 2006 there have been about 2,300 attacks on Palestinians by Israeli settlers in the West Bank.