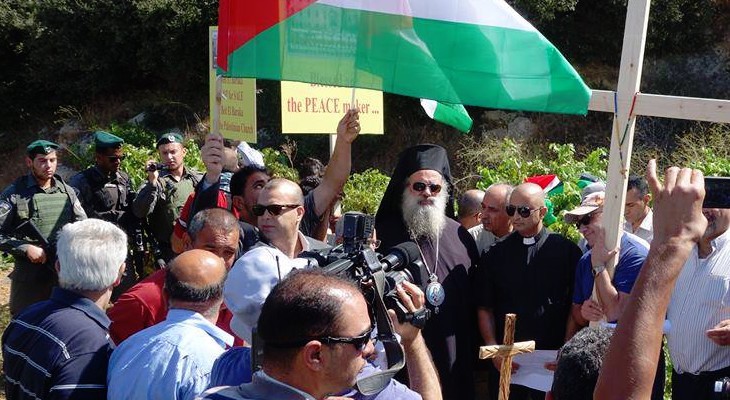 Palestinian Christians are a religious minority that are ignored in discourse on the Palestine-Israel conflict, falsely portrayed as a conflict with its roots in a struggle between Judaism and Islam. At the heart of the Christmas festive season is spending time with family and merriment with a message of peace and joy, but Palestinian Christians have faced another year in the face of oppression, discrimination and violations on their human rights by the brutal Israeli Occupation and regime.

In 2015, Jewish right-wing group has called for a ban on Christmas, the burning down of churches in Israel and expulsion of Christians, describing the followers of the religion as “bloodsucking vampires”.

In the West Bank, Christian families are broken apart by the three metre high Separation Wall, countless checkpoints, roadblocks, lack of permits and tough restrictions on the Freedom of Movement, forcing families to spend the Christmas season separately and live their lives divided.

In Gaza, Christians are amongst the 80% poverty stricken population living in conditions that the UN describes as unliveable by 2020 and continuously suffer the impact of the ongoing blockade and military assaults on Gaza. Palestinian Christians are prevented from making pilgrimage to Christian Holy Sites and the Christmas spirit was further dampened by recent escalations of Israeli-Palestinian violence.

Approximately 10% of Palestinian women today are forced to endure labour or childbirth at checkpoints. Needless deaths of mothers and often their unborn babies are caused whilst trying to reach urgent medical care during labour. In addition, they endure great suffering, humiliation, degradation and serious bodily injuries, and physical and mental health, due to lack of right equipment,  supplies and undue delays and denial of entry.

Palestinian activist Hekmat Bessiso recently stated “If the birthplace of Jesus Christ does not celebrate Christmas, who in the world will?” Palestinian Christians are descendants of some of the oldest Christian communities in the world and the international communities should not be turning a blind eye to their struggles.

Celebrating Palestinian towns such as Bethlehem is a double standard if the international community does not seek to aid the Palestinians to live free from abuses of their Human Rights. As people are coming towards the end of the Christmas festivities and entering into the New Year, we need to remember Palestinian in the Holy Land. They too deserve to live in peace and harmony, surrounded by their families in health and happiness with a future to look forward to, free from the shackles of oppression.