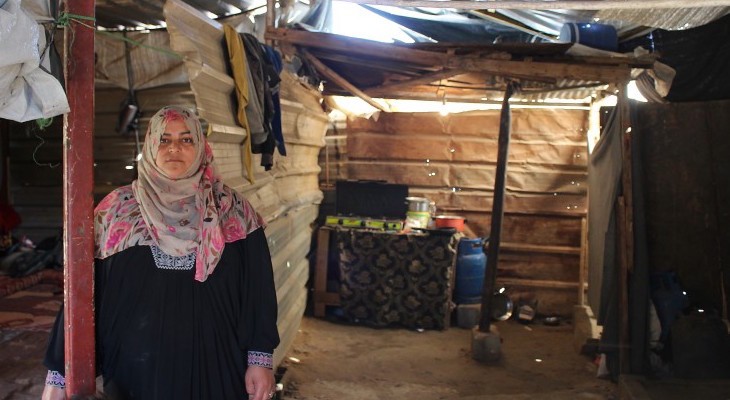 Its damp, dirty, and a smell resembling sewage coats the air. Walls made out of thin pieces of corrugated iron have been crudely put together and tied onto poles creating a misfit structure creating two rooms. While pieces of discarded fabric lie on top of the stony wasteland creating a cobbled together floor – an attempt of sorts to make the shack seem more like a conventional house. Large holes still remain between pieces where sunlight pierces into the dark interior. It’s cold and miserable, but for Suad Najar and her family, it’s home.

“The youngest children are already getting sick,” Najar says exasperated, looking around at the shack she lives in with her husband and their eight children. “They get so wet, their clothes get wet, they are suffering from the cold. They all have diarrhea.”

Najar’s house was destroyed during Israel’s fifty-day bombardment of Gaza in the summer of 2014. Living close to the border area in central Gaza, when Israeli forces began a partial land invasion of the besieged Palestinian territory they bulldozed her home down. With no money to rebuild independently or afford apartment rent, Najar and her family are gearing up to spend a second winter in a row in the makeshift home.

Last year at least four residents of Gaza living in similar makeshift and unsuitable accommodation, died of pneumonia – including three children – during the cold winter months. Now Najar fears for her children as the cold weather sets in.

“The situation was so terrible,” she says recalling living in the shack last winter. “There is one corner of the ground that is higher up than the rest, when it rained we all crowded to there especially for sleeping, the rain didn’t always manage to flood that part. Of course I’m worried about the cold again this winter, the children always suffer.”

Najar is one of around 100,000 residents of Gaza that the United Nations estimates will be living in unsuitable conditions again this winter.

With their homes destroyed during last year’s war, reconstruction efforts remain stalled despite promises made by Arab nations such as Qatar, United Arab Emirates and others to provide funds for the reconstruction process. While some of those funds have made it to Gaza, a majority still remains unaccounted for. Palestinians left in the lurch now believe the donations were empty promises made for PR purposes in the aftermath of the war, an Israel bombardment that decimated the Gaza Strip and helped push an estimated 80% of the population into poverty.

Najar, who’s whole house is destroyed, says she has checked the lists for who is eligible for reconstruction money, but says her family hasn’t been included on any rebuilding list. She has no idea why.

Even if a family is included on the list, there are other problems with the reconstruction effort.

“The problem is they only rebuild the first layer of each family’s house,” Nasif al-Falujah tells Mondoweiss from the animal shack he and his family now live in, situated on a patch of waste ground in Gaza’s Beit Hanoun district. “But my family lived on the fifth floor of the house.”

After three airstrikes hit his extended family’s complex in the 2014 war, Falujah used his savings to rent a small apartment for his family, however their money soon ran out after a few months. With the highest unemployment rate in the world, and an economy that is on the verge of collapse according to a World Bank report earlier this year, gaining any form of regular employment has been almost impossible for Falujah.

Walls made out of fabric and tarpaulin are commonplace in Gaza’s makeshift homes. They provide some privacy, but barely keep the cold, wet, weather conditions out.

Unable to continue paying rent for a flat which the family had been living in since the war, six months ago Falujah began to rent an animal shack, turning the former sheep and goat shed into a place his family could live. Using tarpaulin and scrap pieces of fabric Falujah created walls between the metal poles that served as the skeleton of the structure, and with the little money he had, bought a few bricks to create a small foundation to try and keep rainwater from flowing into the shack.

“We can’t afford concrete so we are using sand for concrete,” Falujah says.  “And this is tarpaulin for the walls,” he says touching the plastic sheeting that makes up the majority of the wall. “We had no place to go, it was the only option.”

Falujah’s children run in and out of the makeshift structure, playing games and chasing each other. The Israel-Gaza border is just a couple of kilometres away, many of the buildings around continue to lie in ruins.

The shack is cold, and illness is already a worry for Falujah, especially for his young children.

“Now it is already so cold,” Falujah tells Mondoweiss. “We just have to put on more and more clothes at night and hope that we can keep warm enough.”

Up and down the Gaza Strip, thousands of families are experiencing winter in freezing conditions, some in makeshift homes and animal shacks such as Falujah, others in what remains of their homes after Israel’s deadly assault on the besieged Strip.

Saad Fathi speaks to Mondoweiss from his destroyed house. Three rooms still exist, though two of them barely, blown off walls patched up with pieces of fabric to give some privacy rather than keep the weather out. The ceiling above dangles precariously looking as though it could fall at anytime.

“I know it’s dangerous, but there’s nowhere else we can go. We don’t have the money to move out,” Fathi says standing under the dangling concrete. “We can’t keep the weather out very well, I worry that the concrete could fall if there are bad weather conditions.”

“Even if it rains for one minute, the whole place is flooded. Last winter was terrible, only God knows how bad it was for us.”

For the thousands of families living in a similar situation, the coming weeks weigh heavy on the mind, so does the uncertainty of not knowing when their housing struggle will end.

“I have no idea how long I have to live like this,” Najar says with a palpable sadness while pacing her makeshift home. “I can’t see an end right now,” she says, echoing the words of the war-displaced throughout Gaza.