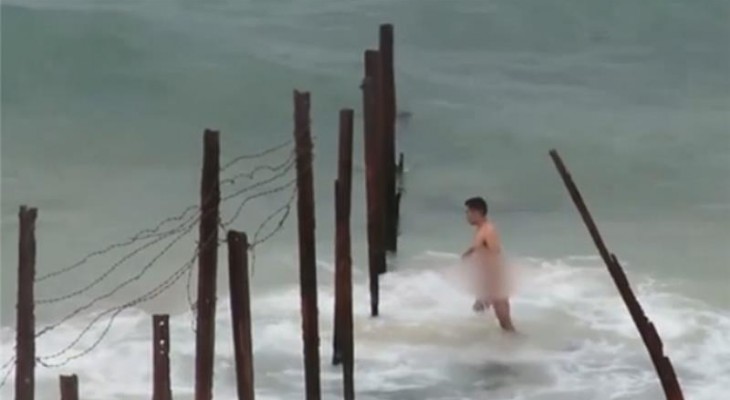 A video has surfaced of Egyptian border guards shooting dead on Thursday an unarmed 28-year-old Palestinian shortly after he swam in from the Gaza Strip.

The video shows Ishaq Khalil Hassan swimming naked in the Mediterranean Sea and then crossing into the Egyptian side through a barbed-wire fence.

Palestinian security officers can be seen shouting at the Egyptian guards in a watch tower to stop them from shooting at Hassan.

Hassan had developed psychological problems due to frustration and inability to leave Gaza for treatment in Egypt, his cousin Ahmad told Al Jazeera from Gaza on Saturday.

He said Hassan was visiting Rafah and staying at his sister’s house.

"I don't think Hassan was fully aware or expecting that the Egyptian army would actually shoot at him," Ahmad said.

He said his cousin's actions did not constitute a threat to the Egyptian security and he was not trying to illegally cross into Egypt.

"Hassan was unemployed, desperate and deeply frustrated because of his inability to leave Gaza for treatment. But the Egyptians never allowed him to leave or cross the border.

"The Egyptians are equal, if not even worse, than the Israelis when it comes to their treatment of Palestinians."

The Rafah crossing point between Egypt and Gaza is shut throughout the year and is opened only about three or four times a year by Egypt.

The only other crossing point for Palestinians out of Gaza is the Erez crossing between Israel and Gaza.

The Israeli government allows only limited numbers to cross, mainly for humanitarian and business reasons.

The Palestinian interior ministry in Gaza condemned the killing, describing it as "a cold-blooded execution and illegal" and demanded that the Egyptian government launch an investigation into the incident.