Destruction of al-Aqsa is no conspiracy theory 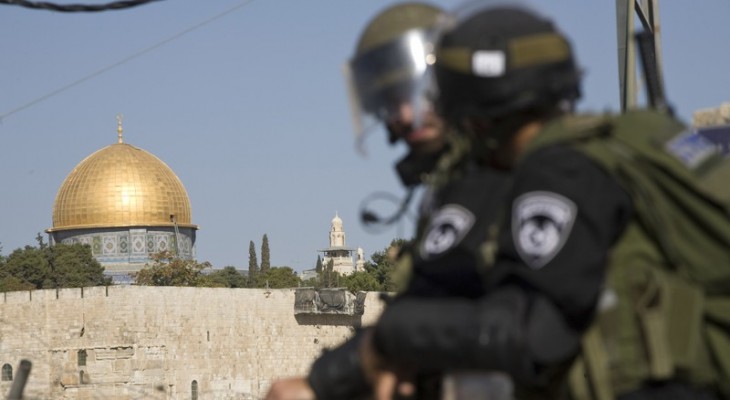 “It is useless,” asserts the colonizer in Albert Memmi’s classical tract, The Colonizer and the Colonized, “to try and forecast the colonized’s actions (‘they are unpredictable! ‘With them, you never know!).” It seems to the colonizer that “strange and disturbing impulsiveness controls the colonized.”

The only explanation official Israel and its supporters could give for why Palestinians have risen up lately is that they were influenced by Islamic propaganda. That propaganda so easily incited the “impulsive and unpredictable” Palestinians in recent weeks, according to Israeli spin.

Generally speaking, Western commentators have been more willing to place the resistance in the wider context of the oppression faced by Palestinians.

Yet this Western approach, articulated mainly by liberal academics and journalists, has something in common with the Israeli one: it regards as baseless and irrelevant the allegations that Israel plans to demolish al-Aqsa mosque in Jerusalem or build a “Third Temple” on the Haram al-Sharif, the surrounding compound. The allegations appear in the western media as a mere pretext which have only incidentally triggered Palestinians to rise up.

There is no denying that after nearly 50 years of brutal colonization one does not have to look too far to understand the depths of despair and levels of rage felt by Palestinians.

However, this understandable impulse to act against oppression should not lead us to ignore Israel’s plans towards Haram al-Sharif. Nor should we accept that Arab and Palestinian apprehensions about Israel are figments of the oriental imagination and not rooted in reality. In fact, they can be substantiated.

It is, therefore, crucial to ask, whether you are religious or secular: is al-Aqsa in danger? If it is, then its precarious future is not just an offense to Islam but also a further indication of how far Israel’s settler-colonial project could go.

Demolishing Arab and Islamic sites in Jerusalem is not unknown in Israeli policy and attitudes. In 1967, Israel razed the Moroccan Quarter in the Old City of Jerusalem.

This was an architectural gem of Islamic civilization dating back to the late 12th century and had hosted some of the most important Islamic religious orders.

When Zionism appeared in Palestine, its leaders were not only trying to purchase land for settlement but also to buy what they considered to be Jewish Jerusalem.

Baron Edmond Rothschild attempted to buy the quarter at the end of the 19th century, as did the Zionist leadership under the British Mandate — to no avail. When purchasing did not work, it was taken by force during the 1967 War and demolished.

The demolition included the destruction of the Sheikh Eid mosque built by a son of Salah al-Din al-Ayubi, who liberated Jerusalem from the Crusaders. When learning about the destruction years later, Benjamin Kedar, a historian and vice president of the Israeli National Academy of Sciences, declared to the Israeli newspaper Haaretz that “it was an archaeological crime.”

The destruction of mosques was not a new practice, or one limited to Jerusalem. Zionist forces left intact only very few mosques in the destroyed Palestinian villages and towns during the Nakba — the ethnic cleansing operation of 1948. The Israeli authorities then turned many of the remaining mosques into clubs, restaurants and animal enclosures.

Thus, neither historical monuments in Jerusalem nor mosques around Palestine were immune from the destructive policies of the colonizer. This ruination of the country’s Islamic heritage is deeply engraved in the Palestinian collective memory.

However, it is not only this vivid memory of the Israeli geography of destruction that plants fears among many about the future of al-Aqsa. It is a realistic analysis of the ideology of some of the potent political forces today in Israel, who are represented in Benjamin Netanyahu’s current government.

The most important of them is the ever-growing religious nationalist movement. It used to be a marginal force, but today it is part of the establishment.

As Or Kashti of Haaretz revealed recently, part of the curriculum of that movement’s school system (Israel runs three systems: a secular Jewish one, a national religious one and the “Arab” system) is a program that advocates the building of the “Third Temple.”

Building the temple is the ambition of humanity as a whole, pupils are told. Kashti talked to experts who read the program and although he stresses that the program does not have a direct reference to blowing up al-Aqsa, the pupils are inoculated with the idea that they are on the verge of the Jewish redemption (Geula) of the mount.

This program is supported by Naftali Bennet, the education minister. Along with his colleague, Uri Ariel, Bennett is part of the Jewish Home party, which is committed to replacing al-Aqsa with a Jewish temple.

Following the election earlier this year, Ariel was appointed agriculture minister. In his previous role as housing minister, he called explicitly to build the new temple over al-Aqsa. He is not a marginal politician, and neither is his party.

The Israeli government supports with money and other means several organizations that call openly for a similar plan. The most important of them is The Temple Institute in Jerusalem, founded by Rabbi Yisrael Ariel. Its funding has been investigated by the Haaretz reporter Uri Blau.

The institute’s main goal, according to its website, is “to see Israel rebuild the Holy Temple on Mount Moriah in Jerusalem [al-Aqsa mosque compound], in accordance with the Biblical commandments.”

There is nothing ludicrous or unimaginable in assuming that a zealot Zionist will one day carry out such plans.