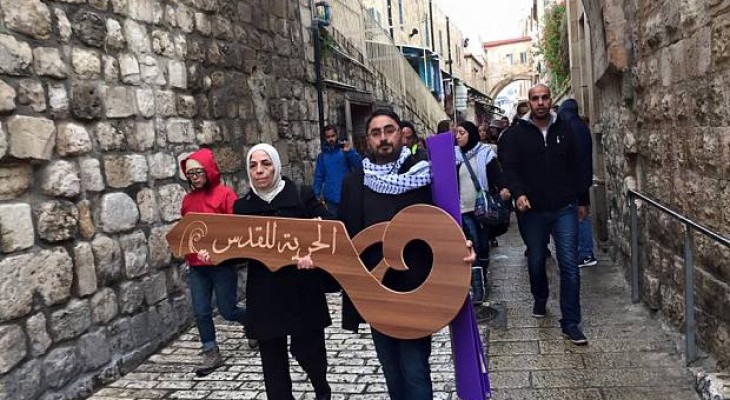 The case of a Palestinian grandmother facing eviction from her Jerusalem home by Israeli settlers is shaping into a public test of the EU’s commitment to oppose Israeli expansion into Palestinian areas.

Nora Sub Laban and seven members of her family are awaiting an Israeli court decision on whether they must vacate their home in the Muslim quarter of Jerusalem’s Old City to make way for a Jewish family.

Israeli settlers have already moved into some rooms in the small building, meaning the Sub-Laban family are living on the other side of an internal wall from a Jewish family and the two sides’ washing lines hang side-by-side in a cramped courtyard.

A settler group known as the Galetzia Trust is now hoping to have the Sub Laban family evicted for good and to put Israeli families in full control of the building.

Led by 59-year-old Mrs Sub Laban, the family has mounted a high-profile campaign to stop the eviction and have appealed to the EU to publicly throw its diplomatic weight behind them.

“Europe talks about supporting Palestinians but if they don’t speak out then it’s just empty words and ink on page,” Mrs Sub Laban told The Telegraph.

The EU officially opposes forced evictions of Palestinians - arguing that they damage the prospects of an eventual peace settlement and violate international law - and the head of the EU mission in Jerusalem met with the family to hear their concerns. EU diplomats have raised the issue privately with Israel.

But the Sub Laban case comes at a fraught moment in relations between Israel and Europe and one EU official warned that Brussels was eager to avoid another public confrontation with the Israeli government.

Last month, Israel reacted furiously to an EU decision to label products made in Israeli settlements in the West Banks. Benjamin Netanyahu, the Israeli prime minister, froze all diplomatic discussions with the EU related to the peace process in retaliation to the move.

“The message from Brussels is they don’t want to escalate the situation with the Israelis any further,” said one official, adding it was unlikely the EU could come out in public support of the family.

Activists involved in the campaign said they were closely watching what the EU’s response.

“This family has tried every legal pathway in the Israeli system and been met with injustice and discrimination and are now facing eviction,” said Fadi Quran, a campaigner with the Avaaz group.

“The EU has made clear statement opposing evictions and now we're waiting to see if they stand by those statements.”

The long-running legal battle over the Sub Laban home reflects the complexity of ownership rights in Jerusalem, a city that has been controlled in parts by Britain, Jordan and Israel over the course of a century of conflict.

A Jewish family was living in the home in the 1940s but fled when Jordan took control of the eastern half of Jerusalem during the 1948 war between Jews and Arabs. The Jordanian government then took responsibility for the house and rented it the the Sub Laban family.

In 1967, Israel defeated Jordan and a coalition of Arab nations and took control of all of Jerusalem. The house went under the guardianship of the Israeli government, which agreed to let the Sub Laban family stay and continue to pay rent to a government custodian.

However, in 2010 ownership of the building was transferred to a settler group on the grounds that the family had not lived there continuously, something the Sub Labans deny.

Last year the family’s eviction was ordered by an Israeli court. The Sub Labans secured a temporary injunction against eviction but they expect their final appeal to be rejected “within weeks”.

The case has been widely covered in Palestinian and Middle Eastern media and is the highest-profile of around a dozen similar cases in East Jerusalem. An online campaign opposing the eviction has received around 30,000 signatures.

British diplomats visited the house in March and have been following the case. Tobias Ellwood, a foreign office minister, reaffirmed in November that the UK government viewed forced evictions as “a serious provocation” and a “contravention of international law”.