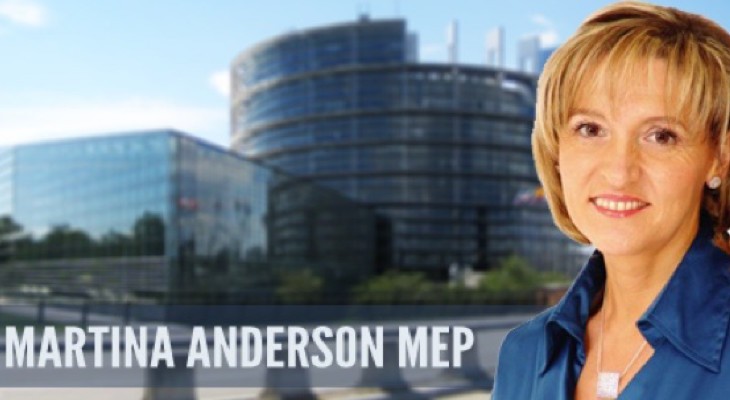 “Ahead of International Day of Solidarity with the Palestinian people I would like to reiterate my call to place Palestine and its people under international protection, ” said Chair of the European Parliament’s Delegation for Relations with Palestine, MEP Martina Anderson.

“The occupiers will not protect the occupied,” stressed the EU official, according to WAFA.

Anderson began her video statement noting that, since the UN resolution which partitioned Palestine, “the right of the people of Palestine have eroded away to nothing” following successive Israeli military aggressions, land confiscation, settlement construction and Palestinians’ freedom restrictions.

Commenting on the latest Israeli spree of killings perpetrated against Palestinians, Anderson stated: “Today Palestinians face as much as hardships as they have throughout their history. The escalation of violence in the region following the Israeli decision to restrict access to Jerusalem holy city on a sectarian basis has resulted in almost one hundred Palestinians losing their lives with thousands more being wounded by police and army’s brutality and indiscriminate settlers’ attacks.”

Anderson also called upon states all over the world to recognize Palestine, and called for the Israeli blockade on Gaza to be lifted, Israeli settler activityand terror, as well as the collective punishment of the Palestinian people and occupation to be ended.

“The collective punishment of Palestinian youths must end and in order to secure peace & stability in the region the occupation must end,' said the EU official.

She also called for the release of Palestinian political prisoners held in Israeli detention centers.

“Genuine progress towards a peaceful two-state solution cannot be made in a climate of fear and intimidation,” she concluded.

The United Nations observes the International Day of Solidarity with the Palestinian People on November 29 each year, a very meaningful and significant day to the Palestinian people.

On that day in 1947, the UN General Assembly adopted resolution 181, which provided for the establishment of an “Arab State” and a “Jewish state” with Jerusalem as a corpus separatum under a special international regime.

According to the United Nations Information System on the Question of Palestine (UNISPAL) website, the Solidarity Day is meant to provide an opportunity for the international community to “focus its attention on the fact that the question of Palestine is still unresolved and that the Palestinian people is yet to attain their inalienable rights as defined by the GA, namely the right to self-determination without external influence, the right to national independence and sovereignty and the right to return to their homes and property from which they had been displaced.”

This day features worldwide events, such as the issuance of special messages of solidarity with the Palestinian people, the organization of meetings and photo exhibitions and the screenings of films.

In its resolution A/68/12 of 26 November 2013, the General Assembly decided to proclaim 2014 the International Year of Solidarity with the Palestinian People (IYSPP).

“The continuation of the Israeli occupation and its persistence with colonial settlement activities, cruel arrests and detention of civilians, affirm Israel's arrogance and intransigence, its violations of international law, its rejection of peace and its adherence instead to the ideology of colonial expansion, subjugation and greed,” Anderson was also quoted in a statement on the official website of Sinn Fein.

“Ending the injustice inflicted on the people of Palestine is a moral and humanitarian responsibility. The international community should compel Israel, the occupying power, to abide by international law to put an end to its violations and its illegal, aggressive and destructive practices.” She added that, “The status quo under occupation and the Israeli iron fist is unsustainable as it keeps the region in a constant spiral of violence, bloodshed and conflict.

“The Palestine people have the right to enjoy freedom, dignity, sovereignty and independence in their Palestinian state with East Jerusalem as its capital.”