Sweden’s new attitude towards Israel is based on its first telephone contact in seven years. 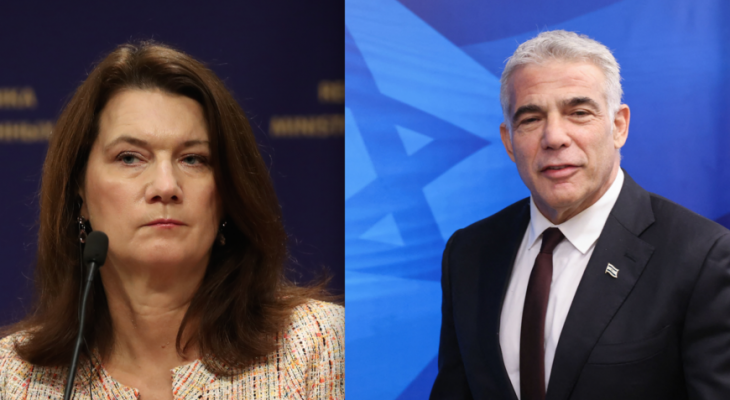 First Phone Call in Seven Years: Behind Sweden’s New Approach to Israel
After the foreign ministers of Israel and Sweden spoke for the first time in seven years this week, diplomats in Stockholm tell Haaretz what’s prompted the relaunching of relations with the new government in Jerusalem

According to Lapid, the conversation “symbolizes the relaunching of relations at this level.” He wrote that he appreciated Linde’s statement regarding her country’s “strong and solid commitment to the security of Israel,” and mentioned that in the course of the conversation, Linde also recognized Israel as the homeland of the Jewish people.

STOCKHOLM – In what could be labeled a new start for bilateral relations between the two countries, Israeli Foreign Minister Yair Lapid tweeted Monday that he had spoken to his Swedish counterpart Ann Linde, calling it the first conversation in seven years between the respective foreign ministers.

Lapid added that they discussed Israel’s participation at next month’s Malmö International Forum on Holocaust Remembrance and Combating Antisemitism, and that he is looking forward to “increased cooperation with Sweden on bilateral and multilateral issues.”

Asked whether the move has anything to do with the recently formed government in Jerusalem, Rydberg responds that “sometimes new people in office can help move beyond tensions of the past. This hasn’t been an issue of people or personalities. Nevertheless, people have the opportunity to try to resolve problems, and I think that both our ministers saw that this was an opportunity.”

Robert Rydberg, Sweden’s deputy minister for foreign affairs, says the timing of the conversation is connected to both sides realizing that the time has come to move forward in a positive direction. “We have strong common interests – there are many issues and aspects that join Sweden and Israel, and we need to cooperate,” he says. “This doesn’t in any way prevent us from having an open discussion about issues we might have different positions on.”

Outlining what the foreign ministers discussed, Rydberg says there was also a personal element to the conversation. “They talked about bilateral cooperation and cooperation between the European Union and Israel; they discussed the Middle East, including the Palestinian issue; the upcoming Malmö conference and the struggle against antisemitism. Our foreign minister spoke about her long history and contacts with Israel, and her many Israeli friends. Minister Lapid mentioned – and I must say this was quite emotional – the fact that Raoul Wallenberg saved the life of his father . So that’s a very special connection from his point of view.

“Minister Linde mentioned her commitment to the two-state solution and she mentioned Israel being the historic homeland of the Jewish people,” he adds. “She also spoke about issues in which Sweden continues to criticize Israeli policy, including the continued construction of settlements” in the occupied West Bank.

Bennett’s first 100 days: arguments, disputes – and compromises
As Israel and Hamas fight in Gaza, antisemitism explodes online in Sweden
A year on, how coronavirus changed Sweden
Sweden has been a vocal Western supporter for the formation of a Palestinian state, even though the peace process has been dormant for years, and the Swedish deputy foreign minister stresses his country’s continued commitment to a two-state solution. “We very much hope that one day we will see two peaceful states, Israel and Palestine, living together beside each other in peace and security. That’s our dream and our hope,” he says. While Rydberg says no concrete high-level meetings between the countries’ foreign or prime ministers are planned at this stage, he is looking forward to physical meetings ultimately taking place between the leaders.

Historically, Israel had excellent relations in its early years with Sweden and other Scandinavian countries. These relations were built on the countries’ left-wing movements that were in power at the time, as well as the connections between their respective professional unions and cooperatives. Good relations were in both sides’ interests in the 1950s and ’60s. Although Sweden had maintained its policy of neutrality during World War II, there were also contradictions within its wartime actions: it supplied Nazi Germany with iron ore for its military, yet also rescued many Jewish refugees. As a result, it was keen to demonstrate its commitment to the newly founded Jewish state. Israel, meanwhile, was looking for allies, especially unaligned allies, during the first years of the Cold War.