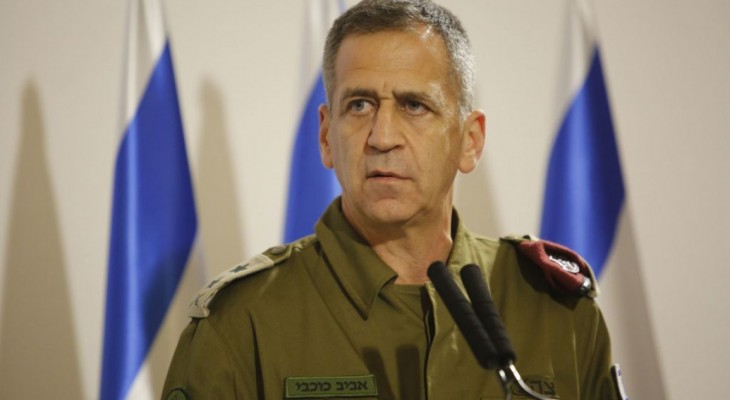 Israel has plans ready to attack the occupied West Bank's Jenin, the Israeli army's chief said on Wednesday, after Tel Aviv suffered a serious embarrassment when a group of Palestinians escaped a high-security prison.

Two of the six Palestinian escapees are still on the run after breaking out from Gilboa prison in northern Israel. All six are from Jenin.

Vowing that the two men would be caught, Chief of General Staff Aviv Kochavi told Israeli TV that the interrogation of the highest profile of the escaped detainees, Zakaria Al-Zubaidi, had indicated Jenin was their desired destination.

One or both of those still on the run could now be holed up in Jenin, Kochavi said, prompting "the possibility of launching a large-scale military operation in Jenin."

"The plans are ready," Kochavi told Tel Aviv-based broadcaster Channel 12. "If the situation escalates, we will launch an operation whenever we need to."

"[If] the number of attacks emanating from the city of Jenin in general, or the refugee camp in particular increases, it may be inevitable to launch an attack".

Kochavi said that the attack would target what he labelled "the terrorist cells in these areas".

The breakout from Gilboa Prison by six Palestinian men earlier this month sparked jubilation from many Palestinians and dismay from Israeli officials.

Five of the men are part of the Palestinian Islamic Jihad (PIJ), an armed group most active in the besieged Gaza Strip.

Kochavi vowed Israel "will eventually get [its] hands on the escapees, even if it takes several months."

The army leader also claimed Tel Aviv could target the besieged Gaza Strip if rockets are launched from the enclave.

"We will attack forcefully whenever there is a violation of sovereignty or harm to citizens."

This is despite Israeli actions in the besieged enclave typically cause a far greater civilian toll than those of Gaza factions against Israel.

In the most recent serious escalation in May, a deadly 11-day Israeli bombing campaign killed more than 260 Palestinians in Gaza, while rockets launched from the Strip killed 13 in Israel.

Addressing Gaza's rulers, Kochavi explained Israel "will use as much force as possible to prove to Hamas that there is no point in attacking us."

Israel imposed a devastating blockade on Gaza in 2007, trapping its residents in what has been called an "open-air prison".