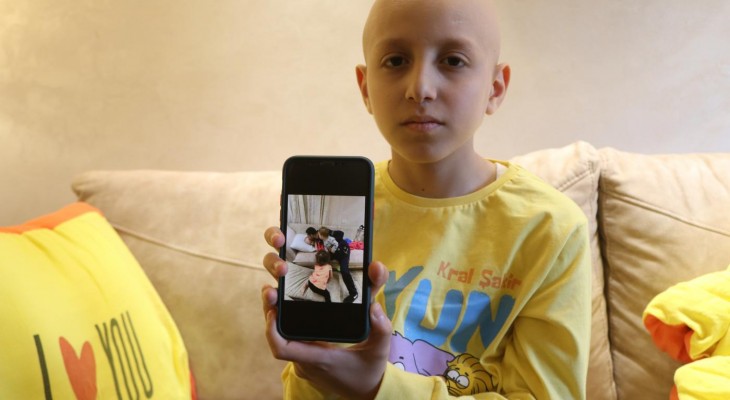 Israeli forces arrested dozens of Palestinians in the occupied territories on Tuesday, including the father of a cancer-stricken child - who's image bidding farewell to his son went viral on social media.

"At 11am today, the Zionist forces barged into our houses and ordered the arrest of Hijazi without providing us any explanation or reason," Bayan Al Natshe, Qawasmi's wife, told MEE.

"I asked them what was wrong with him, was it a court order or something he did wrong and they said we don’t know - they didn't reply to me. They arrested him and left."

The 38-year-old's store was also ransacked by Israeli soldiers in al-Azariya, near Jerusalem.

A picture of Qawasmi kissing the forehead of his son Ahmed, 11, who suffers from bone cancer, was widely shared on various social media platforms. 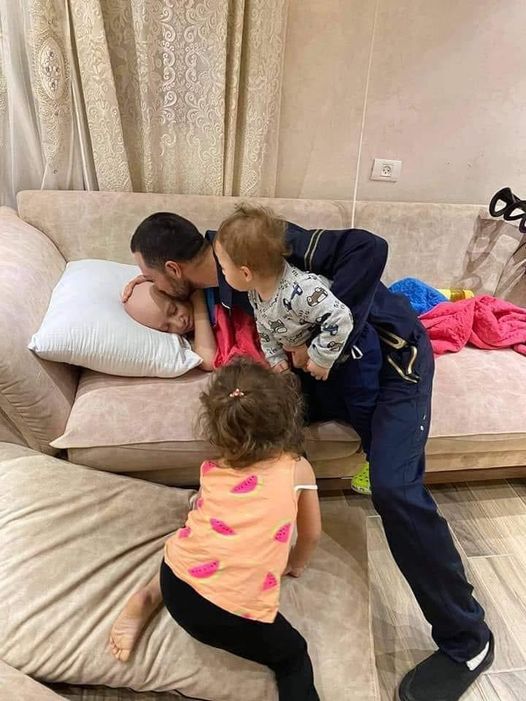 Hijazi Qawasmeh bidding farewell to his cancer-stricken son before he was taken away by Israeli soldiers.

"I was asleep today until I heard a large thud which made me jump. When my father opened the door, we found the police. After an hour, they took him and left. It was such a sad feeling, and I couldn’t control myself so I started crying," Ahmed told MEE.

"May God release him from the shackles of this occupation."

Ahmed has been undergoing treatment for the past seven months, and was supposed to receive chemotherapy in Jerusalem on Tuesday, however the session was postponed.

His mother explained that while he normally received chemotherapy six days a week, his mental health had deteriorated following his father's arrest.

She said that while she played an important role, her husband was crucial with regards to helping Ahmed with his illness.

"He was always the first person to ensure of Ahmed's safety and wellbeing, to theextent that my husband had shaved his hair in support for Ahmed's falling hair after chemo.

"Every time his hair would grow out, he would cut it again just to show Ahmed he was beside him and that Ahmed could beat this illness with the will of God."

Ahmed said that his father had encouraged him to "stand up" to the disease and "defend [himself] in the face of cancer."

"When my father kissed me before he left it felt like I was losing him. I immediately began to miss him. I keep praying they release him tomorrow," he added.

"My last words to him were may you return safely and that I know you won't be there for long."

'No humanity or respect'

Qawasmeh has previously spent eight years in prison, including in administrative detention - a highly controversial policy which allows for detention without charge or trial for renewable periods of three to six months.

Detainees are denied the possibility of appeal or knowing what accusations are being levelled against them.

Natshe confirmed that this was the fifth time that her husband had been arrested, but that it now felt different with a larger family, particularly with a sick child.

"They did not care about the sick child at home, or the fact that it was late at night and they would scare the children. No humanity or respect or manners, its just discrimination and injustice," she said.

Two of Qawasmi's brothers, Ahmed and Murad, have been killed by Israeli authorities.

Murad was killed in 2004, after being pursued for 45 days for his involvement in the Bersheba bus bombings which claimed the lives of 15 Israelis and injured 80. It was carried out in retaliation for the assasination of former Hamas leader Ahmed Yassin.

His brother Ahmed was killed seven years ago aged just 14, in front of Hijazi, while he was near his grandfather's shop in Bab Al-Zawiya, central Hebron.

Natshe said that she had no message for Israeli authorities.

"Whoever does something like this all while knowing Ahmed is sick and what condition he lives through and that he was just out of surgery: what do you expect me to say to them?" she said.

Instead, she called on childrens’ rights groups, and the Arab world, to intervene and imagine it was their child.

Qawasmi was among at least 23 Palestinians detained on Tuesday, according to the Palestinian state news agency Wafa. Nine individuals were rounded up from Hebron, while others were arrested in Bethlehem, East Jerusalem, Ramallah and Salfit.

The arrests came as the manhunt continued for two of six escapees from the Gilboa maximum security prison, who had dug a tunnel under the toilet in their cell.

Four of the six men on the run were captured by Israeli forces over the weekend, while Ayham Kamanji and Munadil Nfeiat, 26, are still at large.