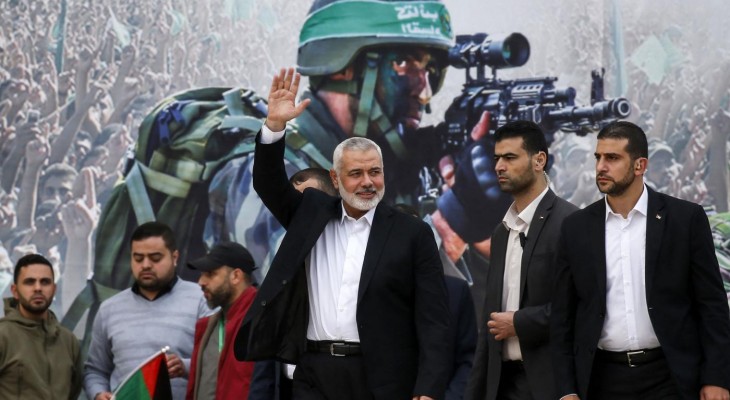 Foreign powers should revise the conditions that have prevented the Palestinian group Hamas from participating in a unity government, the International Crisis Group (ICG) and the US/Middle East Project (USMEP) said in a report on Tuesday.

The report, part of a joint initiative between the ICG and USMEP to help resolve the Israeli-Palestinian conflict, urged international powers to revise the conditions imposed on Hamas by the US, UN, EU and Russia (the Quartet), including the recognition of Israel, renouncing violence and accepting all past agreements between Israel and the Palestinians.

The report comes in the wake of eleven days of hostilities between Israel and the Palestinians in April-May.

The crisis erupted after Hamas, which was established in 1987 and is generally viewed in the Arab world as a legitimate resistance movement against Israel's occupation of Palestinian lands, fired rockets towards Israel amid efforts by Israel to forcibly remove Palestinian families from the East Jerusalem neighbourhood of Sheikh Jarrah and excursions by Israeli settlers into al-Aqsa Mosque.

Hamas won the 2006 Palestinian legislative election and has since become the de facto governing authority of the besieged Gaza Strip.

Whereas international observers considered the elections "competitive and genuinely democratic" and the EU initially approved the outcome, international recognition of the Hamas victory was short-lived. The EU later followed the US and Israel in labelling Hamas a terrorist group.

"Western politicians may be loath to change tack now that Hamas has grown stronger in the wake of the April-May crisis," the ICG-USMEP report said.

"But the current policy is inherently misguided and has long since scored an own goal: empowering Hamas while obstructing the Palestinian reconciliation and political renewal that international actors claim they support."

'Neither peace nor surrender'

In addition to pressing for a long-term ceasefire in Gaza, a return to the status quo in al-Aqsa compound, and a halt to eviction orders in East Jerusalem, the report also called on foreign powers to support Palestinian elections "under the freest and fairest conditions attainable, including with East Jerusalem Palestinians' participation".

It pointed out that dividing the Palestinian people "will lead to neither peace nor surrender" and added that the international community also needs to do more to hold all sides of the conflict accountable.

"Hamas for its indiscriminate attacks; Israel for its policies of systematic discrimination, dispossession and de facto annexation; and the Palestinian Authority for its repressive measures targeting individuals and groups that are critical of it," the report said.

"Interim measures are urgently needed, but the latest bout of fighting offers still more evidence that a rethink of the entire edifice of the peace process is long overdue," it added.

A poll published by the University of Maryland earlier in August found that only 8.1 percent of US Democrats blame the Palestinians for Israel's offensive on Gaza in May, highlighting the growing partisan divide over perceptions of the conflict in American politics.

According to the survey, 3.7 percent of Republicans said Israelis were mostly to blame for the escalation.

The figures affirm previous polling which suggests that Democrats are becoming increasingly sympathetic towards the Palestinians while Republicans hold on to the prevailing pro-Israel stance in US politics.

The majority of respondents - 62.7 percent - said America's role in mediating the conflict should "lean toward neither side".