Double standards on Palestine will come back to haunt the EU 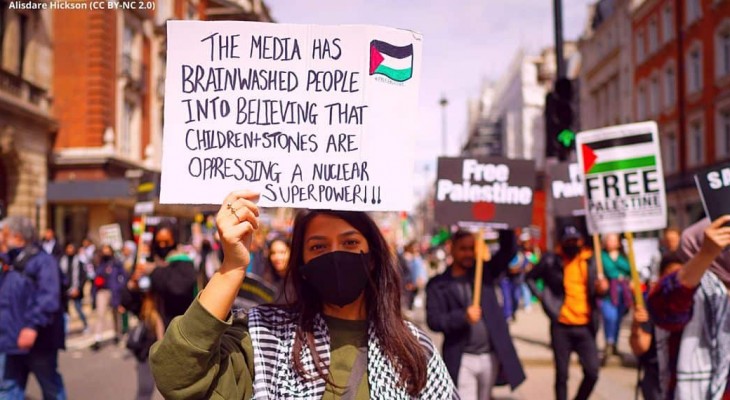 Much ink has already been spilled on the causes, impact and implications of the latest escalation of violence in Israel and occupied Palestine. There is no ignoring its widespread ramifications, radiating from Palestine and Israel to the broader middle east and beyond.

Solidarity protests and citizen-based activism against the Israeli occupation have mushroomed across Europe and the Americas, as well as the Arab/Muslim world. Port unions in Italy have refused to reload tankers with ammunition and weapons destined to Israel and activists in the United Kingdom have blocked the gates of Israeli arms manufactures. Protests have taken place among segments of the Jewish diaspora in Canada and parliamentarians across the world are for the first time debating sanctions on Israel, as a result of its flagrant violations of international law.

International civil society is once again on the move. Inspired by the courage and activism of new generations of Palestinians, who have taken it upon themselves to resist and push back against Israel’s state-sanctioned discrimination and colonial expansionism, these voices are also exposing the double standards which have long been cynically applied by the European Union and the United States. Such voices, in occupied Palestine and in the diaspora, are succeeding in penetrating Israel’s powerful media narratives, naming and shaming leaders in the EU and US for their blatant failure to hold Israeli authorities to account for the over five-decades-long occupation.

Whether it is the Black Rights Matter campaign, the Fridays for Future movement, anti-arms-sales campaigners or international Palestine solidarity, these forces are united in pushing for a clear paradigm shift in international politics. While instances of anti-Semitism have also unfortunately increased, efforts to conflate criticism of the Israeli occupation with virulent hatred of Jewish human beings are proving self-defeating. They ignore the root causes of such mobilisations and ultimately risks increasing, rather than decreasing, the appeal and impunity of anti-Semitic actors and beliefs.

Something is indeed shifting. Regrettably, however, the EU and US are a long way from officially acknowledging the urgent need for change. Major centre-right and centre-left parties in Europe continue to espouse outdated policies, which have done little to advance peace in the region. Insisting on direct negotiations between two fundamentally asymmetric sides or on the continued isolation and sanctioning of Hamas effectively amounts to not having a policy at all. Worst still, when coupled with the legal and diplomatic cover for Israel provided by Europe and the US in international fora, such policies amount to complicity in Israel’s policy of creeping annexation and settler-colonial violence against the Palestinians.

Increasingly detached from the views of the silent—and not too silent—majority, European leaders urgently require a new approach. Understanding that current conditions represent a stain on the credibility and coherence of EU foreign policy, and its avowed support for peace, justice and reconciliation in the broader middle east, the union must act decisively to repair this reputational damage. Inaction will further erode EU leverage and credibility. This at a time when Europe is seeking to enhance its strategic autonomy, while simultaneously looking inwards to review and strengthen the fundamentals of its values and identity—not least through the Conference on the Future of Europe.

Understanding the continuing centrality of Palestine and the Arab-Israeli conflict to broader efforts to promote stability and reconciliation across the middle east is one indispensable component of any new approach. Ignoring the conflict amounts to complicity in the dehumanisation of Palestinian suffering, thereby facilitating Israel’s impunity and clear uninterest in negotiations.

This in turn provides openings for other actors to exploit the conflict for their own geopolitical designs and in the long run undermines European leverage and credibility, when talk of international law or a rules-based system is applied to other crises and disputes. India, Morocco, Russia and even China are looking on, exploiting double standards on Palestine as backing for their own policies and violations. Worse still, these actors are adopting similar policies to those of Israel, its language and technologies—most notably India in Kashmir but with echoes in Crimea, the western Sahara or Xinjiang province.

Europe has a clear and direct interest in ending impunity. It is not just about international law and justice. Such matters directly touch upon European interests, identity and even security. Often described as a ‘payer but not a player’ when it comes to Israeli-Palestinian diplomacy, European financial support for Palestine also cannot hide Europe’s de facto complicity in 30 years of a US-dominated ‘peace process’.

While internal divisions clearly constrain the EU, these are becoming more of an excuse than a genuine impediment to creative engagement on Israel-Palestinian peace. If consensus decisions are blocked by states such as Hungary, European countries should move to establish core groups where like-minded states will be more free to develop novel approaches which seek to break the stalemate. Most importantly, however, Europe must end its double standards and finally hold Israeli authorities to account for their increasingly flagrant violations of international law and United Nations Security Council resolutions.

The harrowing images of intercommunal violence within Israel over the past weeks should serve as a powerful warning as to what the future may hold for the 6.8 million Palestinians and 6.8 million Israelis who inhabit the territory between the Mediterranean and the Jordan river. Many in the Israeli establishment—beginning with Israel’s longest-serving prime minister, Benjamin Netanyahu—are directly responsible for these circumstances. And yet Europe and the US continue to provide cover for Israel, effectively buying time for its advancing annexation.

Over the years, Israel has developed a matrix of legal mechanisms which vary in intensity depending on their implementation within Israel or across occupied Palestine, including east Jerusalem. Despite the distinctions, these modalities are all guided by the same logic of Palestinian dispossession to make way for Jewish supremacy. Actively supported by Netanyahu, they recently led Human Rights Watch to join others—including the Israeli human-rights organisation B’Tselem—to condemn such practices as an apartheid-like system of ethnic domination.

Ending Israeli impunity and working to counter the growing dehumanisation of Palestinian suffering—which facilitates the demolition of homes and the arrest of minors or the bombing of schools, hospitals, Covid-19 clinics and media buildings in the besieged Gaza strip—is the bare minimum of any European and international action. The alternative to double standards and Realpolitik is consistent application of universal norms, such as the rule of law and human rights. Supporting investigations by the International Criminal Court into war crimes perpetrated by both sides is thus another key element of engagement.

Whether this paradigm shift will finally arrive to high-level European policies towards Palestine and Israel is uncertain. What is clear however is that something needs to change and that further support and diplomatic cover for Israel will not lead to improvements. Rather, it will continue to erode European ‘soft’ power and credibility, while ensuring that Palestine and the broader middle east remain an arena of instability, injustice and authoritarianism—for years if not decades to come.