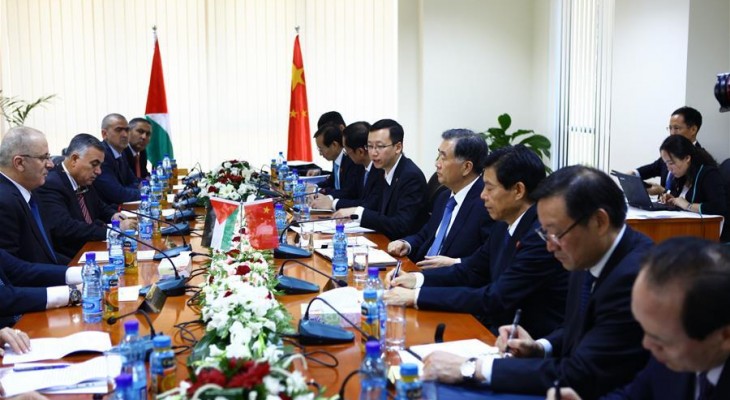 China has always supported the just cause of the Palestinian people to restore their legitimate national rights, visiting Chinese Vice Premier said in the West Bank city of Ramallah.

According to official sources here, Wang, who is on an official visit to Palestine was talking to the Palestinian President Mahmoud Abbas and Prime Minister Rami Hamdallah.

During the meetings, Wang said China and Palestine are good brothers and friends. China supports Palestine\'s economy, the people\'s livelihood and its capacity building, and will make every effort to implement the ongoing plans and projects.

According to Wang, China has implemented more than 40 aid projects since the 1960s, such as Baqa\'a refugee primary school, Gaza middle school, Gaza coastal road and medical supplies, and has trained nearly 3,000 Palestinians in
various fields.

He said the Chinese government has decided to provide 30 million yuan (about 4.7 million U.S. dollars) in aid to Palestine. In 2016, China will sponsor 400 Palestinians in professional training in China, and plan to organize two bilateral training projects for Palestinians in the field of international affairs and university affairs.

The Chinese vice premier also attended with President Abbas a handover ceremony for a China-funded foreign ministry building to Palestine.

He expressed worry about the recent flare-up of the conflict, urging the two sides to show restraint and end the conflict as soon as possible.

Wang said the Palestinians and Israelis should build and accumulate mutual trust in order to resume the stalled peace talks. China will continue playing a constructive role in promoting the peace talks, he added.

Abbas thanked China for always providing firm support, saying the Palestinians cherish the long-term friendly relations with China. He believes the bilateral cooperation in politics, economy and culture will reach a higher level in the near future.

Abbas insisted in resolving the Palestinian issue through peaceful means, calling for more political efforts from the international society and expecting China to play a bigger role in it.