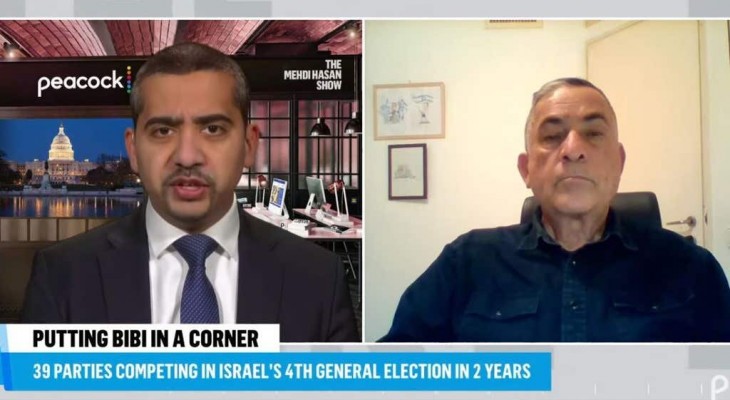 Haaretz columnist Gideon Levy joined “The Mehdi Hasan Show” on Peacock TV to discuss Israel’s unprecedented fourth election in two years. Hasan asked Levy to elaborate on a recent column in which levy argued that “Israel is headed to its most dangerous election ever.” Levy explained his argument, noting that the repetitive elections are now seen by the population as irrelevant and that a lack of ideological difference between the parties is suppressing debate on major issues facing Israel.

Hasan also asked Levy to compare the similarities between former U.S. President Donald Trump and Israeli Prime Minister Benjamin Netanyahu. Levy explained that while the two inspired one another, “there are big differences” between the two: Netanyahu is “much more knowledgeable, clever, educated and I wouldn’t underestimate Netanyahu.”

Levy continued, arguing that "because of this Netanyahu may be more dangerous” than Trump. The conversation also included a breakdown of Netanayhu’s alliances with far-right parties and Israel’s rightward slide which Levy described as key in understanding why the Palestinians and the occupation of the West Bank are not a central feature in the Israel election campaign.