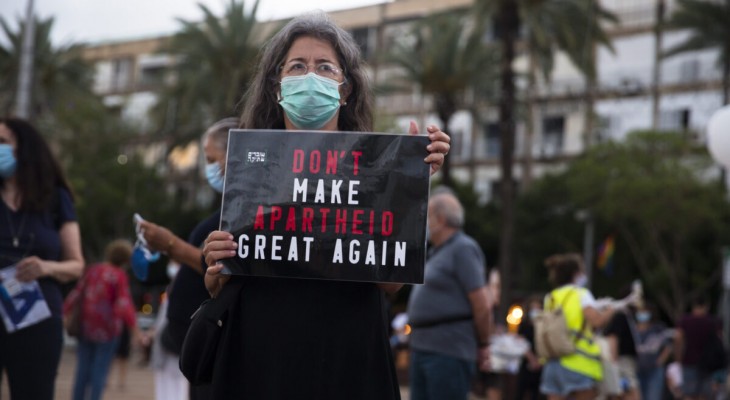 A new report by the UK charity War on Want has further exposed Israel's two-tier racist legal system in a detailed analysis of the military court system in the occupied West Bank operated by the Zionist state.

There are two legal systems operating in parallel for Palestinians living in the occupied West Bank, said the report, explaining that there is "Palestinian law and Israeli military law, the latter of which is codified through thousands of military orders".

Judge, Jury, and Occupier' debunks the common myth that Palestinians are granted self-rule since the 1993 Oslo Accords. It exposes how Palestinians have no means of escaping Israel's racist military judicial system, which has created a "separate and unequal" reality. For example, Israeli settlers arrested in the West Bank are tried in civilian courts inside Israel, whereas Palestinians are tried in military courts.

The treatment of the two populations in such discriminatory manner was branded recently as apartheid by B'Tselem in a landmark position paper. According to the Israeli human rights group, the Zionist state was guilty of "advancing and perpetuating the supremacy of one group – Jews – over another – Palestinians."

Israel views Palestinians as a security threat from birth, claims the report. Since 1967, for example, Israel has decreed more than 411 Palestinian organisations illegal, including all the major Palestinian political parties. Palestinian civilians are then prosecuted for "membership and activity in an unlawful association", a key tool in Israel's repression of anti-occupation activism.

The view of Palestinians as a security threat from birth delegitimises all opposition to the illegal occupation and serves as a justification for criminalising all types of expression. According to the report: "The complex web of military laws imposed upon the occupied Palestinian population is designed to shrink the space for Palestinians to live physically, to create psychological trauma, and undermine their ability to act collectively as a people."

This report examines the operation of Israel's military courts, as well as their corollary institutions, the prisons, and detention centres across the West Bank, East Jerusalem, and inside Israel where Palestinian detainees awaiting trial and serving sentences are held. It also looks specifically at how this system of courts and prisons upholds and extends Israel's illegal occupation across the West Bank and impacts the lives of Palestinians across their historic homeland.

Urging people to join War on Want's fight against what it calls "colonialism, occupation, and apartheid" the report exposes the ways in which Israel's military judicial system is having a far-reaching and profoundly discriminatory impact on Palestinians.

Over 800,000 Palestinian civilians are said to have passed through Israel's military courts since 1967 when the occupation began. This system and the profound injustice it dispenses upon Palestinians must be brought to an end, said War on Want.