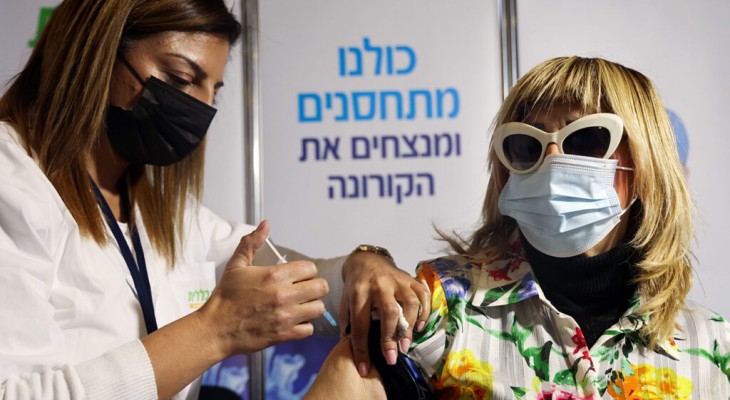 Israel continues to roll out Covid-19 vaccines at world-leading speed to its nine million citizens: since the programme began on 19 December, over 45 percent of its population has been vaccinated. According to the British Medical Journal, infections are ‘plummeting’ as a result.

Palestinians, meanwhile, are being forced to wait.

Last week, Israel agreed to supply 5,000 doses to Palestinian frontline medical workers, but even now only 2,000 doses of the Moderna vaccine have been delivered; this week, Israel has delayed the delivery of vaccines to Gaza. On Wednesday, Israeli medics vaccinated a mere 400 Palestinians—residents of East Jerusalem and Palestinians who work in Israel on a daily basis—and Palestine has received 10,000 doses of the Russian vaccine, enough to vaccinate 5,000 individuals — but the Occupied Territories are home to millions.

With more than 108,000 coronavirus cases in the West Bank resulting in 1,325 deaths, and some 51,000 cases in Gaza—one of the most densely populated areas in the world—resulting in 523 deaths, the Occupied Palestinian Territories have a fatality rate of 1.1 percent compared to Israel’s 0.7 percent. The already extreme healthcare inequalities for Palestinians under Israel’s occupation, especially in the besieged and impoverished Gaza Strip, have been compounding the lethal effects of the virus.

That Palestinians are being forced to wait in spite of Israel’s own rapid roll-out of the vaccine and in spite of its responsibilities as an occupying power under international law speaks volumes about the value placed on Palestinian lives. In this, Israel is in breach of a number of Geneva Convention articles: Article 55 of the Fourth Geneva Convention explicitly states that the occupying power has the ‘obligation to ensure, to the fullest extent of the means available to it, the food and medical supplies of the population’; Article 56 states the occupying power has ‘the duty of ensuring and maintaining […] public health and hygiene in the occupied territory.’

In addition, Article 47 states that ‘protected persons who are in occupied territory shall not be deprived, in any case or in any manner whatsoever, of the benefits of the present Convention’ as a result of any agreement between occupying power and occupied territory. This negates any reference to the Oslo Accords, which Israel has attempted to cite as justification for not vaccinating Palestinians.

So why are Palestinians being forced to wait by an occupying power which has rolled out a vaccination programme for its own citizens at such speed? The answer is that this is part of a wider regime of control wielded through enforced waiting.

When we listen to Palestinians’ experiences, it becomes apparent that being forced to wait is a fundamental part of their day-to-day life. Waiting is not an unforeseen or unexpected outcome of the occupation; it’s the product of an engineered environment designed to impose a temporality of slowness and stasis onto those unfortunate enough to have to endure it.

Like all colonial powers, Israel recognises time is an artefact of power. However, unlike conventional forms of colonialism in which the colonial power seeks to totally incorporate an indigenous people into its own mode of temporality, ultimately to dominate and convert the population into an exploitable labour force (as seen historically with European powers imposing the Gregorian calendar, for instance), Israel excludes Palestinians from its own mode of temporality, and imposes one of slowness in order to push them out.

Israel’s own citizens are privileged with a model of time typical of advanced-developed nations – one defined by hyper-speed and connectivity. The country enjoys good roads and a range of international airports; it lauds itself the ‘Start-Up Nation’, an environment ripe for rapidly developing business and tech innovations.

Meanwhile, those living in the occupied West Bank are hyper-regulated by over 5000 military laws and edicts which limit the freedoms to move, build, tend crops, transport goods, dig for water, and more. Being forced to wait at checkpoints turns the simplest of journeys into a gruelling experience; so does being forced to undertake wide detours on dilapidated backroads, waiting years on end for building permits for them only to be denied, or building homes only for them to be torn down. The same goes for the lengthy applications required for travel permits, work permits, or for loved ones to return from unfair administrative detention.

Under its system of apartheid, Israel wields time as a weapon to support its settler-colonial goal: ultimately, to capture the maximum amount of land and the minimum number of Palestinians. By making life as difficult as possible—by making Palestinians have to wait in every aspect of their lives—Palestinians are forced into ‘voluntary transfer’ where they are not already forcibly expelled.

Here, Dr Ashrawi alludes to the fact that Palestinians’ experiences at checkpoints are not neutral periods of stasis. They can be loaded with historical, individual, and collective trauma, which manifests every time one is forced to pass through. During the Second Intifada, for example, 60 women were forced to give birth at checkpoints; 36 babies and five women died as a result. Each year we read of Palestinians being shot dead by Israeli soldiers at these spacial and temporal blockades.

‘I was in my car with two of my assistants, my driver, and my posters and leaflets,’ Dr Ashrawi recalls of one experience. ‘I was going to Jerusalem to campaign, because I was running for office there. At the checkpoint they stopped us. They beat up my assistants, and when I tried to rescue them, they beat me too. They held me up all day, and they confiscated my posters and leaflets. I couldn’t reach my constituency, and I couldn’t campaign in Jerusalem.’

Perhaps the most extreme example of weaponised time against Palestinians en masse can be found in Gaza, where one million children endure Israel’s hermetic siege, now in its fifteenth year. These children wait to lead normal lives with access to permanent electricity and clean water. Seven million Palestinian refugees in diaspora and in the Occupied Territories themselves also wait to return to their homes.

Pressure must be applied to overturn Israel’s attempt to force Palestinians to wait for the Covid-19 vaccine – both for the sake of the Palestinians facing its lethal consequences and for the Israeli citizens it puts at increased risk. But in applying that pressure, it’s important to recognise that waiting is a symptom of the bigger problem.

If we are to see meaningful change, it must begin with respecting the centrality of the Palestinian voice in their struggle for justice. We must listen to their experiences of time and space under occupation, and amplify those stories. If the transmissibility of Covid-19 can symbolise anything positive, it’s our own interconnectedness – a reminder that, as always, an injustice anywhere is a threat to justice everywhere.