Europe can right its wrongs on Palestine 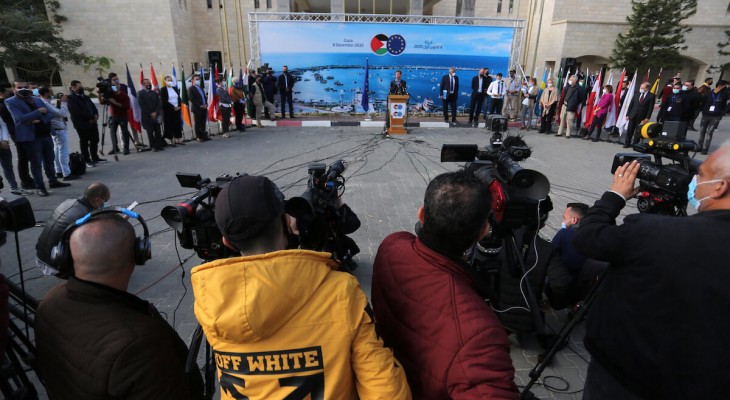 Europe bears a unique historical and moral responsibility towards Palestine and its people. In 1980 it defined its stance for a two-state solution in the Venice Declaration and set the bedrock for its current position on the negotiations process. The declaration also was Europe’s first condemnation against Israeli settlements and a forceful call for the Palestinian people “to exercise fully its right to self-determination.” Yet decades has shown the European Union has effectively adopted a strategy of managing the conflict, and prolonging the status quo for as long as possible.

Incidentally, at the time of the Venice Declaration there were only 49 Israeli settlements in the West Bank with a population around 18,000, according to the Israeli human rights group B’Tselem. Today, that number has grown to more than 350 settlements, including more than 100 unregulated outposts, inhabited by 622,670 in the West Bank, along with a further 209,270 settlers in East Jerusalem. This means that about fifth of the West Bank population are Israeli settlers.

In the intervening decades Europe has been content with issuing statements denouncing settlement construction. With the advent of the European Union, Europe has become the leading trade partner with Israel. Trade between European Union countries and Israel exceeded $40 billion (33 billion euros) in 2019. These close economic relations exist alongside an absence of exerting any kind of pressure on Israel to save the two-state solution.

As for the EU’s move to change the label on products originating from Israeli settlements, they are ill-gotten gains from occupied territory, banning settlement products would have been more in tune with international law. Furthermore, the percentage of these products does not exceed 2% of total Israeli exports to the countries in the EU, therefore their impact on the Israeli economy is close to zero.

Bear in mind, Israel has demolished EU-funded projects benefiting Palestinians worth more than $2 million between 2015 and 2020. The EU also provides the Palestinian Authority with around $185 million in direct support, inlcluding paying $103 million in salaries and pensions. Yet 66% of Palestinians surveyed in the latest public opinion poll from the Palestinian Center for Policy and Survey Research (PSR) said they want the president, Mamoud Abbas, to resign. He was elected in the last presidential elections in 2005, and has overstayed his mandate to govern by more than a decade. In fact, most Palestinians (around 55%) said they consider the entire Palestinian Authority a “burden” on them and on their cause.

Outside of EU policy, leading states in the union are charting courses to further stigmatize Palestinians through their legislatures. The German parliament, the Bundestag, adopted a non-biding resolution in 2019 that termed the BDS movement as antisemitic and called to end public funds towards initiatives that support the boycott. That same year France’s parliament expanded the definition of antisemitism, linking it to anti-Zionism. This shows that the policies of the European Union and its states towards Israel and the Palestinian Authority are at the expense of the suffering of the Palestinian people, their rights and their future.

Despite that, the two-state solution is the official program of the PLO and the international community. Seemingly, for officials abroad the engine behind the peace process, even a moribund one, is too well-invested to abandon. Yet there is an unacknowledged consequence, which is that it further legitimizes the current leadership and stymies the emergence of alternative leaders.

Europe is burdened with historical and moral responsibility towards the Palestinians and their cause. It, along with other countries must adopt a new strategy towards the Palestinian-Israeli conflict. This strategy must be based on the solution of one democratic state, which guarantees equality for citizens between the river and the sea. It must replace the convention of donor aid with compensation–compensation not aid. A few examples: in a one state solution strategy, compensation could be disbursed to refugees or to institutions within an economic plan to bridge the gap between Israelis and Palestinians. Europe must respect the values ​​that it believes in, which are inconsistent with its current policies.