The path to peace in Israel-Palestine is through decolonisation 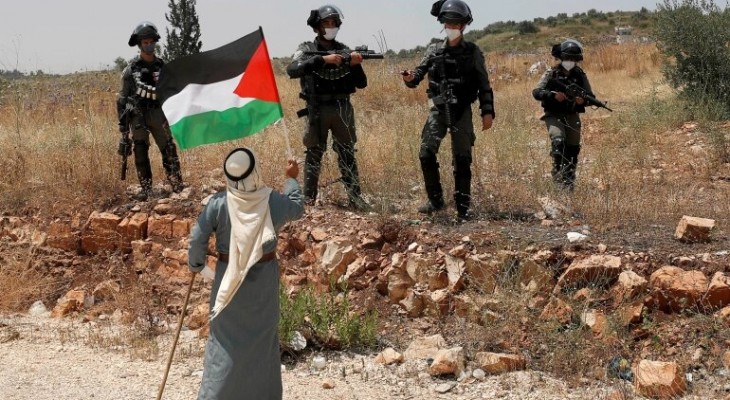 On January 26, Israeli Prime Minister Benjamin Netanyahu posted on his Twitter account a Likud election video in which a map of the entire territory of historical Palestine appears under the words “one state”.

This was not the first time that a prominent Israeli politician has publicly expressed his dedication to the vision of Greater Israel – a Jewish nation state that is sovereign over all lands between the Jordan River and the Mediterranean Sea, including Palestinian territories. In fact, such declarations are so common in Israeli election campaigns that Netanyahu’s tweet barely generated any serious discussion in the international arena.

But international observers did not remain silent about Netanyahu’s latest ode to “Greater Israel” simply because they viewed it as electoral bluster meant to drive votes towards the Likud. They ignored the tweet because they have long been aware that Israel wants to expand its sovereignty over all of the land.

Indeed, while many still occasionally employ the empty rhetoric of “salvaging the two-state solution before it is too late”, no serious observer believes that the creation of a sovereign Palestinian state is an actual goal of Israel, or any of the hegemonic world powers such as the United States or the United Kingdom.

Today, the “two-state solution” is nothing more than a distraction. It is a myth used by Israel to divert attention from its efforts to make the dream of Greater Israel a reality. Israel’s actions, from relentless settlement expansion to systematic dehumanisation of Palestinians, make it clear that it has no intention of ever allowing the formation of a sovereign Palestinian state.

Based on what Israel does, not what its Hasbara says, there are only two possible ways forward from the current status quo: the formation of a single apartheid state over the entire land of historical Palestine, in which only a handful of Palestinians live as second class citizens, or a decolonised one, where all citizens enjoy equal rights and freedoms regardless of their ethnic and religious backgrounds.

It is not hard to imagine how the first scenario would play out. Apartheid rule has been a defining characteristic of settler colonies like Israel throughout history.

In a nutshell, settler colonialism is a type of colonialism that functions through the replacement of an Indigenous population with a settler society that, over time, develops a national identity and claims sovereignty over the colonised land. To achieve their goal of becoming fully sovereign over the land they colonised, settlers first expel or eliminate the majority of the Indigenous population. They then establish a system of segregation, or apartheid, to cement their supremacy over the Indigenous persons who have remained in the colonised territories. Such systems of segregation not only ensure that there is a legal and social hierarchy between the settlers and the Indigenous peoples of the land, but also criminalise the practice, or even the mere mention, of Indigenous sovereignty.

Today, it is hard to deny Israel is an apartheid state. Palestinians living under Israeli rule, including those who hold Israeli passports, do not enjoy full citizenship rights. They do not have freedom of movement either. Even Israel’s own Nation State Law makes clear that it is not a state for all its citizens and residents, but “the nation state of the Jewish people”.

The settler-colonial project in historic Palestine, however, still appears not to be complete. As Netanyahu repeatedly underlines in his political messaging, Israel wants to rule over entire historic Palestine while maintaining a Jewish majority population. For that to happen, most Palestinians will need to be expelled from the territories they are currently living in, with only a few remaining behind. Only then can Israel fully expand its sovereignty over the entire land and continue calling itself the “Jewish nation state”. Therefore, it is accurate to say the current Israeli apartheid, as devastating as it may be, is only one part of a larger project.

Israel is already expanding its existing illegal settlements in the Palestinian Territories and building new ones at an unprecedented pace. As settlers oust Palestinians from their homes on a regular basis, and ban them from even entering the neighbourhoods they once called their own, Israel is slowly moving closer to its dream of “Greater Israel”.

All this begs a very uncomfortable question: Is there another violent mass expulsion of Palestinians on the horizon? Are these settlements and other efforts to dehumanise Palestinians a prelude to an even more terrifying event?

Many in the international community, including some prominent Palestinian intellectuals, believe that a violent mass expulsion, like the one Palestinians experienced in 1948, is not a real possibility. They claim Israel would not dare to openly commit such a crime against humanity in the 21st century.

But throughout history, many mass expulsions, genocides and other acts of mass ethnic cleansing came as a surprise to most observers. In the 1920s and 1930s, for example, almost no one outside of Palestine expected the relatively small-scale Zionist actions in Europe and the Middle East to pave the way for the violent mass expulsion of Palestinians from their homeland just a few years later.

Israel has been defying international law and violating the most basic human rights of Palestinians with impunity for decades. Since 1948, it never showed any indication that it is willing to change its ways. If anything, it is more aggressive today than ever before in its efforts to dehumanise the Palestinians, steal their remaining lands, and achieve the dream of Greater Israel. Moreover, the likes of Netanyahu are openly talking about their desire to form a single Jewish-majority state over the entire land.

So it is hard to deny that, if and when the right conditions materialise, the Israeli state will not hesitate to do what is necessary, including embarking on a mass expulsion of the Palestinians, to expand its sovereignty.

This brings us to the second possible scenario for the future of Israel-Palestine: a single decolonised state.

The growing disillusionment with the two-state solution, coupled with Israel’s apparent efforts to expand its apartheid rule over all Palestinian lands, led many Palestinian scholars and activists, as well as some political organisations and groups, to advocate for the creation of a single decolonised state in historic Palestine.

While there are several proposed models, most suggestions include three fundamental principles:

This is the only scenario that can prevent Israel from achieving its dream of establishing a single apartheid state in historic Palestine and allow all inhabitants of these lands to live their lives freely, peacefully, and with dignity.

Though their numbers remain small, some Israelis – acknowledging the destructive path their state is currently on – are also calling for the creation of a decolonised single state encompassing both Israeli and Palestinian territories. Certainly, for this dream to one day become a reality, more Israelis need to put their support behind this proposal.

Even with the support of many more Israelis, however, transforming a colonial apartheid state into a decolonised and democratic one is not going to be easy. The path towards decolonisation and a common Israeli-Palestinian future is full of obstacles. Building a decolonised state together will require both the Israelis and the Palestinians to make sacrifices. It will challenge their sense of identity, nationality, home and history. There will undoubtedly be disappointments, frustrations and conflicts. Some dreams will remain unrealised, some goals will not be achieved and progress will likely be slow.

But all this is still preferable to the alternative. If Israel is allowed to continue on the path it is currently on, and take more steps towards erasing Palestinians from their homeland, we will experience all this, and much more – we will all be stuck in a vortex of hatred, violence and oppression for years to come.

Today, Israel is merely repeating known historical cycles and trajectories of colonial modernity. So we know how the story will end if we do not act now: in more violence and destruction.

The path to sustainable security and prosperity, unlike what many in Israel appear to believe, is not through more aggression and segregation but decolonisation. If enough Israelis come to recognise this fact, together with the Palestinians, they can mark the beginning of a new, more hopeful chapter in world history.