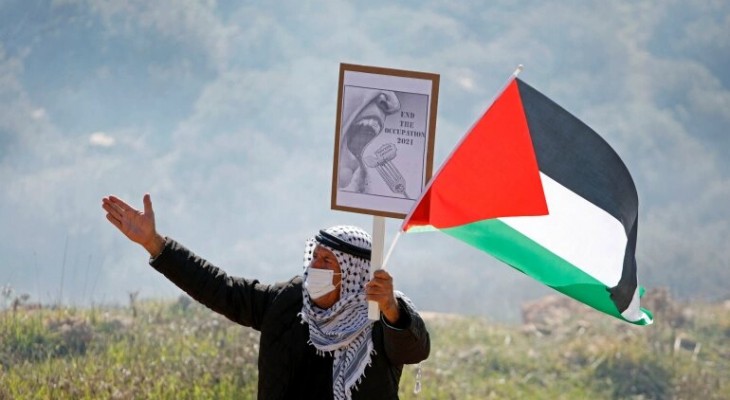 For decades, Palestinians have suffered under Israeli colonial occupation backed and empowered by US political, financial, and military support. This has allowed Israel to gradually expand its settlement and colonisation of Palestine, to the point that now only about 5 percent of historical Palestine’s land is actually controlled by Palestinians.

This process continued almost undisturbed by international scrutiny for years, under the cover of Washington’s “peace process” and its self-declared position as mediator between the Palestinian and Israeli sides.

When Donald Trump became US president in 2017, however, he disrupted this carefully crafted process of gradual colonialisation. He embraced the most racist and extremist Israeli agenda and eliminated the established practice of paying lip service to Palestinian rights.

Israel’s right-wing government was given the green light to do as it pleased, while the American president kept validating its illegal, criminal acts. This effectively accelerated the process of establishing “facts on the ground” – i.e. the usurpation of Palestinian land and subversion of any Palestinian political leverage to the point that Palestinian demands become impossible to fulfil and their rights irrelevant.

So what does Trump’s legacy mean for the Palestinians?

Although the US Congress passed a bill recognising Jerusalem as the capital of Israel in 1995, successive US administrations postponed acting on it due to the absence of an agreement between the Palestinian Authority and Israel on the status of the holy city.

On December 6, 2017, Trump turned what was already on paper into reality by issuing an executive order to move the US embassy to Israel from Tel Aviv to Jerusalem. The move happened on May 14 the following year, which coincided with the 70th anniversary of the Nakba and which the Israelis marked by massacring dozens of Palestinians in Gaza.

A few months later, Trump announced that he was defunding the United Nations Relief and Works Agency for Palestine Refugees (UNRWA). This was not only a catastrophe for millions of Palestinians who depend on the UN agency for food, education and health care, but it was an attempt to erase the status of the Palestinians as refugees and, by doing so, their right of return. By trying to destroy UNRWA, Trump was doing the bidding of the Israeli government which has done everything it can for decades to prevent ethnically cleansed Palestinians from returning and reclaiming their land.

The right of return was also further undermined by the “deal of the century” Trump and his son-in-law Jared Kushner put forward. Copying the language of previous US “peace initiatives”, the proposal promised “peace” and “prosperity” for the Palestinians but denied most of their demands, including self-determination in the form of a sovereign Palestinian state. Meanwhile, US Secretary of State Mike Pompeo announced on November 18, 2019, that the US government considers the construction of Israeli settlements in the West Bank not to be a violation of international law.

In his final months as president, Trump did not fail to give yet another lavish gift to Israel: normalisation with Arab states. This was yet another major blow for the Palestinian cause.

In the aftermath of the second Intifada, the Arab League – upon the initiative of the late Saudi King Abdullah – committed to normalise relations with Israel only in exchange for the establishment of a Palestinian state on 1967 borders, the return of refugees, and the withdrawal of Israel from the Golan Heights.

In August, the United Arab Emirates and Bahrain signed normalisation deals with Israel, under the patronage of the Trump administration, without demanding any concessions on the Palestinian issue in return; Morocco and Sudan followed suit shortly after. This was a clear break with the Arab consensus of “land for peace”.

Thus, by the end of the Trump’s presidency, Palestinians seem stripped of whatever they could be stripped of.

Joe Biden’s victory in the US presidential elections in November seems to have brought some optimism in certain Palestinian quarters that the US will change its policy towards the Palestinians. Let us not forget that Trump’s policies were never really in contradiction to Washington’s traditional stance on Palestine, showing full and unconditional support for the Israeli state.

To expect Biden to change anything or compensate for the damage his predecessor has done is foolish. In fact, he and his team have made it abundantly clearly that they will not reverse Trump’s decisions, including the moving of the US embassy from Tel Aviv to Jerusalem. His administration will not support the Palestinians’ struggle for justice; it will not seek their liberation, the end of the Israeli occupation, the dismantling of the Israeli apartheid regime, or the return of Palestinian refugees to their homeland.

The lesson the Palestinians should learn from the four long years of Trump’s presidency is not to bet on any US administration ever embracing their interests and rights or becoming an objective arbiter. The US political elite is an enabler of Israeli occupation and colonisation of Palestine, it has always been and will remain such in the future. And, just like Trump, it will continue to give Israel everything it wants, whether it is legitimacy for its illegal theft of land or an unlimited supply of advanced weapons to use against the Palestinians.

Fully supported by the US, Israel continues its pursuit to establish “facts on the ground” – to establish absolute domination over all of historical Palestine and to make Palestinian statehood impossible. But there is one fact that Israel is completely failing to establish, despite all its military might, financial resources and limitless backing by a superpower: It cannot erase the Palestinians.

Six million Palestinians – deprived of their liberty and homeland – continue to live in historical Palestine. Millions of other Palestinians live in neighbouring Arab countries and the diaspora. Their identity, their very existence, erodes day by day the deception Israel has used to whitewash its apartheid and present itself to the world as a “model democracy”. More importantly, the Palestinian lives and spirit actively undermine the Israeli occupation and apartheid.

Palestinians are suffering shocking deprivation and torment by the Israelis, but they are steadfast. Their very existence has become resistance. And time is not on their tormentor’s side. At this moment in time, Israel may appear as a victorious coloniser, having lifted almost all barriers to annexing the West Bank. But the Palestinian struggle is making headway. In the not-so-distant future, justice will prevail and Palestinians will have their freedom.