Israeli Settlers Beat a 78-year-old Palestinian Farmer With Clubs. Then They Came Back to Attack His Family 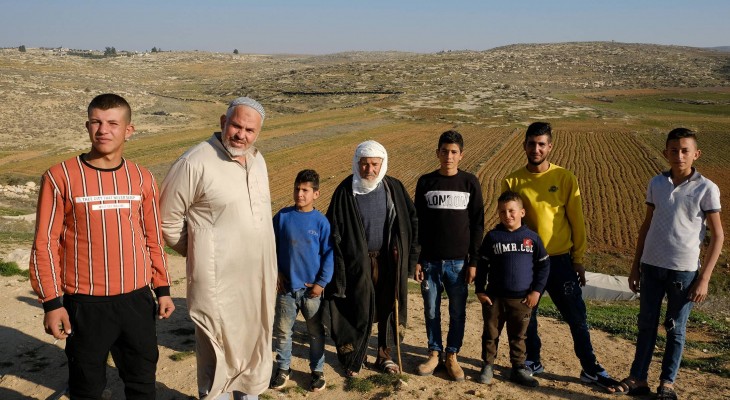 An almost biblical figure emerges from a cave carved into the rock. An old man, clad in a black robe, a white keffiyeh wrapped around his bearded, deeply wrinkled face, his pants held up with a rope, his feet in flip-flops, climbs slowly from the cave. Meet Khalil Haraini, a farmer of 78 who was born here on this land and will likely die on it. He lives in the cave with two of his sons, and together they work the adjacent family plot, 20 dunams (five acres) of wheat fields and barley. The brown soil has been plowed in furrows and is well tended; now a green carpet sprouts from it.

Only a dirt trail leads here, to Wadi Rahim, on the outskirts of the town of Yatta, over the hills from the Palestinian Khirbet Sussia and ancient Sussia and settler Sussia. Two large black tents serving as sheep pens, and a residential cave for the farmer and his sons amid a primeval landscape of hills that surround their fields. But behind this pastoral scene lurks terror, the terror of the settlement of Susya, and even worse, the terror of the wild outpost of Mitzpeh Yair.

More than two years ago, Michal Peleg, a writer and activist from the organization Ta’ayush- Arab-Jewish Partnership, wrote about a violent assault by residents of Mitzpeh Yair on her and her friends: “Was the pogrom enough for you, one of the guys shouted. Wearing their pure white Shabbat shirts, tallitot, kippot, shavisim [prayer shawls, yarmulkes, women’s head scarves], they twisted my hand and snatched the camera. One of them pushed up against me with his tallit in my face, to beat me with purification. And then the women arrived, cursing. One of them kicked me in the rear with all her might: ‘Die, whore.’ Others arrived, wearing masks. On the run, rejoicing. Now it’s become a rabble and the rabble wants an oneg Shabbat [Sabbath celebration]” (“Mitzpeh Yair: A Pogrom for Shabbat,” Ynet; Aug. 27, 2018).

That’s also what Haraini, the elderly farmer, and his family underwent three weeks ago as they worked their fields, which they are trying to cultivate in spite of the terror of the settlers, in spite of the harsh terrain, and despite the lack of water and electricity – consequences of Israel’s draconian prohibitions, in this land of caves in the South Hebron Hills.

Last Friday, in the hamlet of Khirbet al-Rakiz, a few minutes drive away, a young man named Harun Abu Aram was critically wounded when an Israel Defense Forces soldier shot him in the neck at close range, because he tried to resist the impoundment of his generator.

In a lot empty of everything but skittering chickens and plastic chairs placed in the January sun, opposite one of the last houses in Yatta, members of the Haraini family were waiting when we arrived this week: Mohammed, 54, an imam in the Yatta mosque, and son of the farmer from the cave; and cousins Aamar Haraini, a Palestinian policeman of 38, and Mahmoud Haraini, 17, a construction worker who was the one most badly wounded by the settlers.

The settlers of Susya and Mitzpeh Yair frequently graze their sheep on the family’s land and attack them from atop all-terrain vehicles and horses. But the weekend of December 18 was especially rough.

At about 10 A.M. that Friday, Khalil noticed a settler they know, named Yosef, from Mitzpeh Yair, grazing his sheep on the family’s land. Hoping to stop him, Khalil asked, “Why are you shepherding on my land?” Immediately, about 10 settlers rushed out from behind a hill, armed with pistols, rifles, clubs, axes and iron chains. One of them assaulted the elderly farmer, knocking him to the ground. Khalil was stupefied. Settlers then beat him with their clubs. Khalil’s two sons quickly alerted Nasser Nawaj’ah, a field researcher for the Israeli human rights organization B’Tselem, himself a resident of the local caves, who immediately summoned the police and the army.

The farmers and their families are most afraid of Yaakov from Susya, the most threatening of the settlers who attack them. They’re also afraid of Moshe from Mitzpeh Yair. They have photographs of all of them. In this case, the Israeli security forces showed up about an hour later. The settler who knocked down Khalil had fled, and the security forces lost no time expelling the Palestinians from their own land. The other settlers also left. Khalil was taken to the hospital in Yatta, where he was treated and discharged. “He is a strong person,” his son Mohammed, the imam, says.

The next day, Saturday, the family returned to work the land. This time there were about a dozen men, some of them from Yatta, who came to help Khalil and to protect him. After about an hour of work in the field, they suddenly noticed a drone overhead that was apparently photographing them. Of late the settlers are using drones a great deal as a means of surveilling the Palestinians, with the funding and encouragement of the government. Later on in our visit, we also saw a kippa-clad Israeli operating a drone over other fields and buildings in the area.

About 10 minutes after the farmers spotted the drone that day, settlers from Mitzpeh Yair and Susya arrived at the field. Shabbat in the morning, a beautiful day, as the song goes.

This time they were even more violent. This time they also carried stones, in addition to the usual clubs, axes and chains. They threw the stones at the farmers and also used them to beat some of the Palestinians. One of the settlers approached 17-year-old Mahmoud and threw a stone at his face from a distance of about a meter. Mahmoud’s left ear was injured and he bled. Two stones struck the leg and forehead of Aamar, the Palestinian Authority police officer, who was not in uniform or on duty.

Afterward the settlers advanced toward the cave and the stone structure that stands at the edge of the field; from there they fired a few shots with an M-16 rifle at the farmers’ legs, to frighten them even more. A settler attacked Mohammed from behind, kicking him in the back. Pistol-packing Yaakov was their commander and gave the orders, the eyewitnesses say.

The farmers tried to protect themselves and threw stones at the settlers to drive them off their land. The army and the police were summoned again and tried to break up the melee, but without detaining any of the assailants. Some of the settlers left, but Yaakov stayed behind, with the soldiers. He threatened the farmers about returning to work the land, which he claimed belongs to him. He then brought an all-terrain vehicle to the site and began plowing over the already-plowed soil, as one of his cohorts filmed him. He did so, the farmers tell us now, to prove his ownership of the land – though it does not belong to him. Yaakov also sometimes shows up riding a horse or on an ATV, making a show as lord of the field, and then leaving.

Mahmoud’s left ear was treated at the Yatta hospital. He’s still under medical follow-up, and he says that his hearing hasn’t yet fully returned.

The next day, Sunday, six or seven people were back in the field, among them Khalil. Again the settlers first sent one of their shepherds to graze his flock on their plowed land, and when the farmers tried to shoo him off with shouts, the settler summoned his friends. About 20 of them charged out from the hills, this time masked, carrying their firearms and other non-lethal weapons, as always. Again, there was an exchange of stones and curses and again the army was called in.

Again it ended with the two adversarial sides being dispersed, as if it were just a quarrel between shepherds – as though there’s symmetry between assaulter and assaulted, between the plunderer and his victim. This time, at least, the incident ended without anyone being wounded.

Are you afraid, we ask. “Of course I’m afraid,” Mohammed the imam says. “They are armed and are supported by the army and they are very violent. I am proud of my father for going to the land, but I am also very worried about him and about my two brothers who live with him.”

Is young Mahmoud afraid? He replies that he is not, but his cousin Aamar immediately corrects him: “Why do you say you are not afraid? We are all afraid. One day they will kill one of us.” Zoharan – criminals – is their term for the settlers.

Another cousin, Thaar Haraini, who's in his late 30s and is visiting from his home in East Jerusalem, adds, “We are defenseless. We are surrounded by criminal settlers and there is no one to protect and safeguard us. The time has come for international organizations to protect us here. This is a deliberate policy of the government, to shut its eyes and approve these attacks on us, in order to expel us from the land and then to expropriate it and transfer it to the settlers. It’s also very convenient for the army to use these criminals for its purposes.”

Afterward, we suggested that we accompany the group to their land, but they were very hesitant. They heard that “hilltop youth” from the unauthorized outposts have been on the rampage for the past two weeks across the West Bank, and they were apprehensive. It took quite some time before they mustered the courage to go with us to the land on which they were born – they, their parents and their parents’ parents.

“For 78 years, he’s lived here,” says Khalil’s son Mohammed, “and suddenly young settlers come whose parents are from America and Russia, and want him to leave his land.”

It was quiet in the fields of Wadi Rahim, next to the cave of Khalil Haraini, when we got there. It was a perfectly pastoral scene, as though none of this had happened.