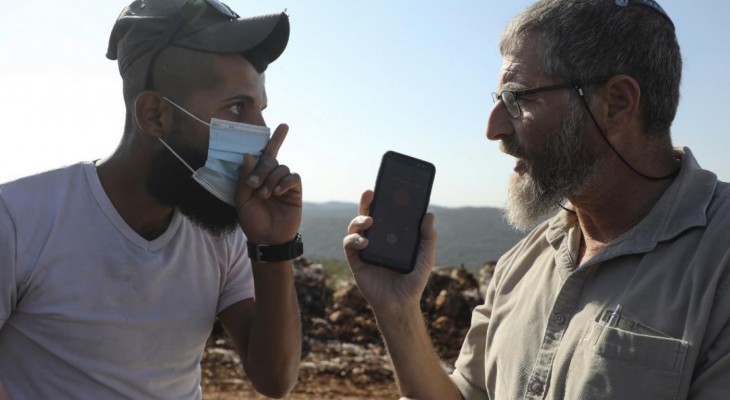 A Palestinian protester argues with an Israeli settler during a demonstration against the expansion of settlements in the occupied West Bank town of Salfit, near the Israeli settlement of Ariel on 30 November 2020 (AFP)

A Palestinian attacked on Friday by an angry crowd of Israelis in West Jerusalem told Middle East Eye that he had "miraculously" survived after stones were thrown at his vehicle and one person attempted to stab him.

Ahmed Jaber, a resident of East Jerusalem, was on his way to work early on Friday at 3:30am, commuting through the Givat Shaul neighbourhood in West Jerusalem, when a mob of Israelis stopped his car and started attacking him and his brother.

A video of the attack went viral on Palestinian social media platforms.

Israelis in occupied West Bank settlements and Jerusalem have been protesting since 21 December and calling for revenge following the death of 16-year-old Ahuvia Sandak, a settler who died in a car crash while being chased by Israeli police.

Sandak had allegedly thrown stones at Palestinians before Israeli security forces pursued his car. Four other settlers were injured in the accident.

Jaber told MEE that when he arrived in the Bar Ilan area of Givat Shaul, he was met with a protest.

“I reversed my car to get away from them. One settler approached me and asked me for a cigarette, and when he heard Quranic verses playing from the car speakers, he called the others, who attacked the vehicle, shouting ‘Arabs, Arabs,’” Jaber said.

Jaber got out of the car and asked his brother to take the wheel while he attempted to prevent the crowd from attacking the vehicle.

“When I got out of the car, a settler attempted to stab me with a knife in my back, but he missed. I chased him but was chased back by a larger number of settlers. My brother managed to reverse the car, and we managed to flee,” Jaber said.

He said that he approached Israeli security forces stationed around 100 metres from the scene, and told them what had happened.

“They did not do anything, and they seemed not to care. I had to call an ambulance for my brother, who was injured and went to the police to file a complaint, but they did not seem to care and told me to fix the vehicle out of my pocket.”

Jaber told MEE that if the situation had been reversed and a group of Palestinians had attacked two Israelis, “they would be arrested, attacked and thrown in jail”.

Last week, Israeli police warned they were "losing control" over settlers, as the Israeli army called for more reinforcements in the West Bank.

Some 700,000 Israelis live in settlements in the West Bank and East Jerusalem in violation of international law, with high levels of security at their gates and military checkpoints in the vicinity.

Settlers - including the so-called "hilltop youth" - have launched numerous attacks on Palestinians and their property over the years, setting fire to crops and homes, slashing car tyres and spraying racist graffiti, causing deaths and injuries to Palestinians.

"Hilltop youth" settlers sees the West Bank as the biblical kingdoms of Judea and Samaria, which they believe belong to Jews and must be purged of Palestinians.