Netanyahu’s Days May Be Numbered, but a Cadre of Far-Right Fanatics Wait in the Wings 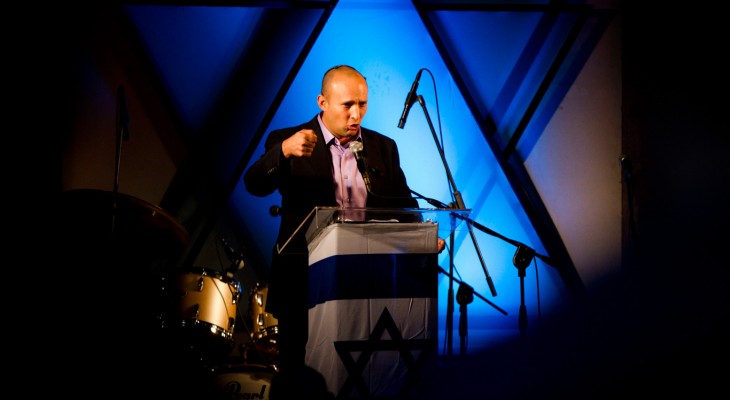 srael is due to hold elections for the fourth time in just two years. The Israeli election commission has yet to announce the precise date, but it seems fairly certain that elections will take place in March of 2021, demonstrating once again that Israel is unstable and likely to become even more dangerous than it already is today.

All eyes are on Benjamin Netanyahu and how he might manage to remain in the Prime Minister’s seat. But all eyes should, in fact, be on two men that are far more dangerous than Netanyahu. They are the two standard-bearers of the Zionist religious right, Naftali Bennett and Bezalel Smotrich. These two men are the most radical, uncompromising, religious-nationalist radicals in Israeli politics today. They are ambitious and politically savvy, and if they get their way, then what the Russian Ambassador in Tel-Aviv said in an interview recently, that Israel is a destabilizing factor in the region, will soon be considered an understatement.

The religious Zionist movement has, until recently, been treated as a fringe group, but they have long been on the cutting edge of the Zionist project, and most post-1967 Zionist expansion can be credited to them. Their relentless activism and zealous belief that God is on their side have in many ways shaped the Zionist state. Netanyahu may be the only person capable of keeping them somewhat contained.

Over the past few decades, these religious fanatics managed to become the darlings of the Zionist mainstream. On the one hand, they seem friendly and generous in their desire to see all Jewish people thrive in their “ancestral homeland.” On the other, they are feared and despised. Either way, they have considerable political strength and influence and have reached a point where their agenda is no longer seen as fringe or radical. They are dedicated and effective in all areas where they serve. They perform well in both the military and civil service, and both have the capacity to reach the very top of the political pyramid.

A piece in the Israeli daily Haaretz, comparing Netanyahu to Bennett, claims that “They both get their inspiration from the right-wing in the United States and in Israel, the Bible and Ayn Rand, and believe that the strong are right. But as a kippa-wearer and an entrepreneur who made a profitable exit, Bennett beats his rival hands down. Netanyahu might know how to quote the Bible and Ayn Rand, but Bennett fulfills them with his actions and his way of life.”

The piece goes on to say that “Bennett is undoubtedly the most impressive Israeli politician who has emerged over the past decade. Instead of the prime minister’s miserliness and glory-hounding, which has led him to indictment, Bennett is seen as go-getter without affectations who pays his way.” Netanyahu, right, and Bennett pose for a photos with children in the Arab town of Tamra, Sept. 1, 2016. Sebastian Scheiner | AP

Indeed it seems that today many Israelis hang their hopes on “Hayamin Hahadash” party Chairman Naftali Bennett as their savior. In the opinion polls, where he has soared to 22 Knesset seats, he is seen as a leading candidate in the race to the premiership. This is unprecedented for someone who represents not just the radical right but the religious Zionist right.

While serving as defense minister, Bennett said, “the ICC comes from an antisemitic starting point, such that Israel will always lose because it is the Jewish State and Israel should not try to ingratiate itself to the court.”  Further, he is quoted as saying, “The Hague is the workshop of modern antisemitism.”

Bennett has served as an officer in some of the IDF’s most murderous terror units and is known to defend IDF soldiers and commanders who commit war crimes. During Israel’s 1996 criminal excursion into southern Lebanon, Bennett commanded a reconnaissance unit and personally ordered an artillery attack on the UN compound in Qana village, where hundreds of Lebanese civilians had taken shelter. The attack caused the death of over 100 civilians who had fled there to take shelter.

Several decades later, when another war criminal, Ofer Vinter, a friend and comrade in arms of Bennett, commanded the notoriously murderous “Givati” Brigade that murdered countless civilians in the Gaza Strip, Bennett said Vinter and his soldiers deserve medals. Vinter, too, comes from the radical religious Zionist right and has since been promoted general. As for his own conduct, Bennett admitted publicly on Israeli television that “I killed many Arabs in my life, and I have no problem with that.”

The Israeli newspaper Haaretz, reported how Smotrich justifies his support for the segregation between Jews and non-Jews in Israeli maternity wards, “My Wife Wouldn’t Want to Give Birth Next to an Arab Woman,” Smotrich says. He continues that he “doesn’t want his wife lying next to a woman whose baby will murder his child in another 20 years.” US Ambassador to Israel David Friedman, right, speaks to Smotrich during a 2017 visit to an Israeli Yeshiva. Photo | US Embassy

Smotrich is one of the founders of the Regavim organization, known for its campaigns to terrorize Palestinian citizens of Israel and Palestinians in the West Bank. In their well-funded campaigns, they claim Palestinians are “stealing Jewish land and water, taking over lands that are not theirs, and building illegally.” It’s a radical organization of right-wing religious Zionists who promote racism and violence.

Smotrich has been at the forefront of a relentless attack by the religious Zionist right against the Israeli High Court. Along with the rest of Israel’s religious right political block, he has been pushing for resources and support for Israeli settlements in the West Bank, and through his Regavim organization, actively terrorizing Palestinians throughout Palestine.

“The Land of Israel was desolate and empty,” Smotrich stated, referring to Palestine as “Eretz Yisrael.”

We returned to this land after two thousand years and found sand and Malaria and we brought progress. We are very hospitable people, and the Arabs are welcome to remain here as our guests as long as they accept that this is a Jewish state. Any Arabs who have national aspirations can go somewhere else to other Arab countries.”

In a rare speech delivered in English, he added that “Only when they [the Palestinian people, MP] give up on their national aspirations here in the Land of Israel will there be a chance for peace.”

Smotrich claims that there are no Palestinian people and that the Arabs who reside in Israel have three choices. The first is to remain in the state of Israel as residents with no political rights. They may live here and enjoy the progress the Jews brought here to Israel’s otherwise desolate land, and they can enjoy the fruits of “our” labor. They may vote in local elections and have some control over their local government but not on a national level.

The second choice is to leave and live anywhere else, or as he calls it, “they can pick any Daesh or ISIS country that they want.” “All around you see wars and Arabs killing and eating each other alive, so they can go there if they want.”

The third option is that “we will see them through the sight of a gun.” If the Arabs decide to stay and fight, they will die.” Smotrich also considers this a choice that works.

Smotrich is careful not to discuss the issue of Jerusalem and the building of a so-called “Jewish Temple” to replace the 1,500-year-old Al-Aqsa Mosque, a mainstay of the religious Zionist right. While detailed plans are being made and millions of dollars invested to that end, all he says is that this will be done in accordance with the will of the Almighty.

Smotrich has referred to Arabs as uncivilized and barbaric and referred to himself as a “proud homophobe” and the Gay Pride Parade as a “parade of beasts.” He called the Palestinian Bedouin a demographic ticking time bomb and said something must be done about their fast growth as a community. He has no problem with Jewish people having large families, quite the opposite, that, he says, is a “blessing.”

The face of Israel

Tamar Zandberg, a member of Knesset from the left-leaning Zionist Meretz party, said that “the face of the generation is the face of Smotrich.” While speaking in the Knesset, she outlined policy after policy from the Smotrich playbook all of which have been adopted by the Israeli government.

While every democratic society has had to deal with its own right-wing fanatics, Israel has provided them with a platform, funding, and weapons of mass destruction. As the U.S. and Israel point to Iran as a potential nuclear threat, the real threat comes from Israel, where Bennett and Smotrich can get their hands on Israeli nukes.

Smotrich is admittedly one of the most serious, effective, and hard-working politicians in the Israeli Knesset and has managed to create an image of a caring politician, albeit with an extreme anti-Palestinian and anti-left agenda. Together with Bennett, who is more of a political heavyweight, they will either replace Netanyahu or be in positions to wield even more power.

Miko Peled is an author and human rights activist born in Jerusalem. He is the author of “The General’s Son. Journey of an Israeli in Palestine,” and “Injustice, the Story of the Holy Land Foundation Five.”