From Balfour to Rabin: Israel’s many contradictions. By: Nasim Ahmed 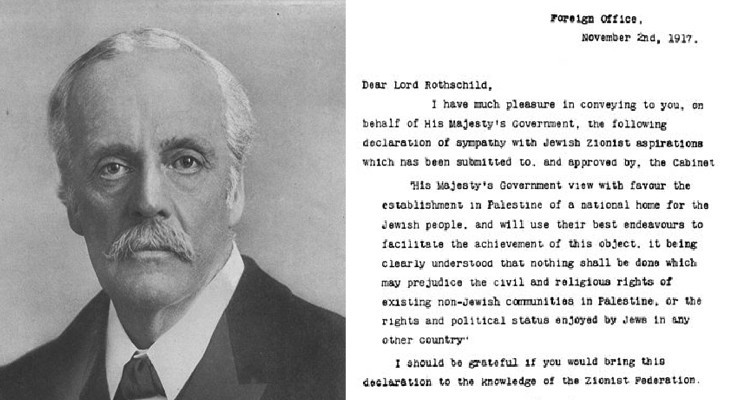 The events are each very significant in the history of Palestine-Israel: one is etched in Palestinians’ collective memory as the beginning of their dispossession and ethnic cleansing, while the other basically decapitated Israel’s so-called peace camp.

In spite of their distance in time, both are united by the endless cycles of contradictions, conflict and paradoxes that underpin policies advanced by both the British and Israeli governments.

If we concede that political violence is a consequence of unbridgeable contradictions, and peace and stability is the reward for overcoming such contradictions, then has peace been elusive in Palestine because the underlying contradictions are in fact irreconcilable? What explains nearly one hundred years of systematic repression despite the condition contained within the Balfour Declaration which was supposed to safeguard “the civil and religious rights of existing non-Jewish communities in Palestine” and the promised end of Israel’s occupation as determined by Rabin and Oslo?

The simplest explanation is that there is extreme incompatibility between the demands of Israel and the rights of Palestinians. The former far exceed even the basic and minimum rights of Palestinians, not least the right of refugees to return to their land, for example. Israel’s membership of the UN is conditional upon that right being facilitated; it never has been.

Only a fool would deny that the commitment to achieve a conflict-free Palestine is not as strong or sincere as the commitment to the expansionist goals of Zionism. This disconnection was evident — infamously so — within the Balfour Declaration, which was unprecedented in its audacity, with "one nation [Britain] solemnly promising to a second nation [‘the Jewish people’] the country of a third nation [the Palestinians].”

Contained within the declaration are the seeds of conflict which have blighted generations of Palestinians. In conspiring to create a “national home for the Jewish people” in Palestine, Britain abdicated in advance its subsequent moral and legal duty to protect and safeguard the national and religious rights of Palestinians under the League of Nations Mandate. The two goals were irreconcilable from the outset.

The correspondence between Arthur Balfour, the British Foreign Secretary, and Lord Walter Rothschild, a leading British Jew, was little more than a private pledge, especially as there already existed other conflicting promises made by the British government to ease through its war aims.

There was little to suggest that this particular promise, to create a Jewish national home in Palestine, was going to have a greater historical bearing than the earlier promise made to Sheriff Hussein of Mecca (part of the Hussein-McMahon correspondence) or those agreed with the French under the Sykes-Picot agreement.

For three years the document remained hidden from the Arabs. Oblivious to the conspiracy with France and the underhanded Balfour Declaration, they remained committed to the promise made during 1914-15 by the diplomat Henry McMahon to Hussein Bin Ali that the Arabs believed included Palestine in their quid pro quo with the British.

These contradictory documents guaranteed the loyalty of the Arabs in shoring up Britain’s war efforts against the Ottoman Empire on the Middle Eastern Front. It was only after Britain was granted the League of Nations Mandate over Palestine in 1920 that the Arab leaders became aware of Balfour’s promise to the Jewish community.

Britain’s closest ally was the United States; under President Woodrow Wilson the US wished to remake a new global system enfranchising native peoples while ending imperialism, and felt uneasy about such duplicity by the British. When Washington received copies of the secret and clearly contradictory agreements, the White House was dismayed. One US diplomat commented: “It is all bad and I told Balfour so. They are making it a breeding place for future war.”

Britain’s promise to create a “national home for the Jewish people” was predicated on “it being clearly understood that nothing shall be done which may prejudice the civil and religious rights of existing non-Jewish communities in Palestine”; this was always going to be impossible to fulfil. It’s no surprise that the freedoms and political aspirations of the majority indigenous Palestinians were ditched to the benefit of Zionist claims to the land, for Zionism was already fast becoming a potent political force in Europe.

Criticism of Britain’s intentions to deny the Arab majority any voice in shaping the future of their own country was brushed aside. “The weak point of our position,” Balfour wrote to British Prime Minister David Lloyd George in February 1919, “is of course that in the case of Palestine we deliberately and rightly decline to accept the principle of self-determination.” If the existing (Palestinian) population were consulted, he added, they would “unquestionably’ return an anti-Zionist verdict.

In reply to Lord Curzon (another critic), Balfour stated quite categorically that, “In Palestine we do not propose even to go through the form of consulting the wishes of the present inhabitants of the country…. The Four Great Powers are committed to Zionism. And Zionism, be it right or wrong, good or bad, is rooted in age-long traditions, in present needs, in future hopes, of far profounder import than the desires and prejudices of the 700,000 Arabs who now inhabit that ancient land.”

Britain’s dual obligation was in reality a public relations strategy to moderate and manage Arab discontent that was sure to follow any decision to trade the rights of the majority of Palestinian Arabs for the ideological aspirations of a minority of Jews within the Jewish communities of Europe.

The impact of this began to be felt as early as the 1920s when the spirit of Zionist separatism began to transform the socio-economic landscape of Palestine. Contrary to the mistaken view that the parting of the ways between the Arab and Jewish communities began in the 1930s as a result of Arab protests, it was British policy related to the development of a Jewish national home from the beginning of the British Mandate that produced the environment that led to the social, economic and political bifurcation of Palestine.

As Barbara Smith writes in the Roots of Separatism in Palestine, a typical colonial mode of thought was applied on Palestine and to the issue of Britain’s duel obligation. The European settlers, with their superior education, technology, know-how and capital, would bring material benefit to the “natives” and provide the “backward” Arabs with an example to which they could aspire: the injection of Zionist “yeast” would produce a “cake” to be shared with the Palestinians.

Moral justification and political repression sit hand in glove with colonisation. The British implementation of the Balfour Declaration followed this common typology in denying the human rights of people deemed lesser than them. In the end, Britain’s colonial straightjacket on Palestine; the separatist tendencies of the early Zionist community settling in Palestine; the lack of economic resources on which the Arab population could draw; and the growing resentment of Palestinian Arabs at their powerlessness and lack of representation, pushed Palestine into a cycle of instability, tension and violence.

Britain’s grave mistake was thinking that this was just another one of its settler-colonies founded in Africa or the West Indies. It clearly wasn’t. The Zionist movement had its own national goals and aspirations that were at complete odds with Britain.

Even if the British government did not intend to create a Jewish state — as Lloyd George apparently said: “If the Jews take Jewish homeland to mean a Jewish state, then they are aiming too high” — Britain put itself in a compromising position and as a result failed to stop the advancement of this unique form of colonisation that was seeking to establish an entirely new Jewish society in Palestine through the replacement rather than the exploitation of the “natives”.

While contradictions within British policy under the terms of the Mandate and the Balfour Declaration placed subsequent British governments in a compromising position, equally, in the assassination of Rabin there is the potent contradiction inherent within Zionism; between the State of Israel and the land of Israel; between Israel’s security and Israel’s occupation, that has also placed the Zionist state in constant conflict.

Zionism is girded with irreconcilables that are all too familiar with other ethno-religious political programmes subscribing to racial superiority, racial division and ethnic cleansing.

It’s a paralysis that goes to the heart of Israel. The State of Israel focused on Tel Aviv and the land of Israel at the centre of which is Jerusalem are two distinct concepts. Israel within its 1967 borders is recognised by the UN but today’s land of Israel, which extends into the occupied West Bank and occupied East Jerusalem, is an unrecognised entity. Even so the two have become indistinguishable in the minds of increasing number of Israelis.

This contradiction as argued here is rooted in the Zionist mission itself. The conflict between Tel Aviv and Jerusalem is the reason why Yitzhak Rabin was assassinated back in November 1995 by a Jewish extremist who opposed the Oslo Accords, believing, mistakenly, that the leader of the Israeli Labour Party was compromising with the land of Israel, which under international consensus is allotted for a Palestinian state.

Both the Balfour Declaration and the State of Israel tied themselves to their own Gordian Knot of contradictions, conflict and paradoxes. Balfour with its dual and contradictory obligations and the State of Israel with its subscription to Zionism as an ideology while claiming to want to end its occupation. Both make genuine peace impossible to achieve, because both are devoted to ambitions that far exceed basic human rights and international law.

Finally, any commentary on the contradictions, conflicts and paradoxes surrounding Israel would not be complete if it did not include something about Israel’s constant demands over security. Therein is a recurring paradox that has provided opportunities for propaganda by Israel in its defence of ethnic cleansing and apartheid.

It is a unique situation for an occupied and oppressed people to be asked to guarantee the security of the occupier and oppressor before the latter will even consider any moves towards easing, never mind ending, the occupation.

Unprecedented is Israel’s insistence on its own absolute security, whilst perpetuating absolute insecurity for the Palestinians. It must be made clear that there is no moral or legal obligation on the oppressed anywhere in the world to guarantee security for their oppressors.

So, to answer my initial question: peace has indeed been elusive because of the many irreconcilable contradictions and paradoxes underpinning Israel, its creation and its on-going policies and practices. Israelis have become culturally inured to the oppression of the Palestinians, to the point that even very intelligent people who would normally rile against colonialism, dispossession and discrimination are oblivious to their own indefensible position by calling for co-existence with Israel even though it is increasingly acknowledged as an apartheid state.

As Professor Robert Colls puts it in Identity of England, “The problem for subjugated peoples is that subjugating states do not see the problem.” Nowhere is that more obvious than in Israel’s attitude towards the Palestinians.

Can Israel really continue to live with these contradictions? I believe not.