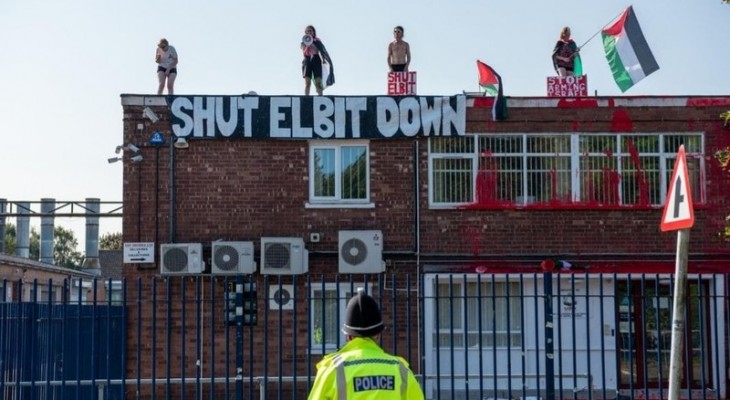 The group Palestine Action has protested continuously at sites in Britain run by the Israeli weapons firm Elbit Systems. (Via Facebook)

Killing a Palestinian will soon be as easy as ordering a pizza.

That repugnant message – albeit couched in less explicit terms – was delivered through a recent article published by the website IsraelDefense.

It quotes Oren Matzliach, a colonel who is overseeing the use of a new app by the Israeli military. The app would allow a commander to type details about a target on a small electronic device and then troops would open fire on that target swiftly.

Ordering an attack will be “like ordering a book on Amazon or a pizza in a pizzeria using your smartphone,” Matzliach said.

The causal way in which the colonel speaks about remote-control slaughter should outrage everyone.

The Israeli authorities – or high-ranking figures within them – view every Palestinian as a legitimate target.

That much became clear – if it wasn’t already – during the Great March of Return protests in Gaza over the past few years. Civilians who demanded their basic rights were officially declared as “terrorists” by the Israeli government.

The app has been developed through the Digital Land Army program, developed by the Israeli arms maker Elbit Systems in conjunction with the Israeli military.

Such “innovations” prove why it is vital to disrupt the weapons trade.

For several months, Elbit has been the focus of protests organized by the group Palestine Action in Britain.

The protests – which have included temporary shutdowns of an Elbit-owned plant near Birmingham and invasions of the firm’s London offices – have evidently irritated Israel and its lobbyists. An Israeli minister is reported to have asked that the British government suppress them.

Protesters can take heart from how previous actions of this nature have made a significant impact.

When Israel attacked Lebanon during 2006, nine activists occupied a software plant that Raytheon, a US weapons giant, had opened in the northern Irish city of Derry. Raytheon decided to withdraw from Derry as a result of that protest.

It is a safe bet that conversations are taking place among Elbit’s managers about the future of their investments in Britain.

Elbit regards Britain as a priority market and has developed a network of factories and offices across the country.

The British government has become an important client for Elbit. Between 2018 and this year, the British defense ministry ordered around $61 million worth of Elbit’s products or services.

During October, Elbit was an active participant in an annual exercise held by the British military. The exercise bears the not-so-subtle name of the Army Warfighting Experiment.

Elbit took advantage of the experiment to showcase new radio equipment and a satellite communications system intended for soldiers.

Elbit also displayed a portable shelter that can, if a promotional brochure is accurate, be set up “close to enemy lines” during a military operation. The shelters – which look compact and relatively comfortable – are “field proven,” according to the brochure.

The weapons industry trots out euphemisms like “field proven” or “battle proven” to alert potential clients how the items being marketed have been tested in wars.

Elbit’s most lucrative “battle proven” products are probably the drones it has supplied to Israel’s military. They have proven lethal when used for firing missiles at civilians.

Not surprisingly, Elbit does not openly gloat about how it abets Israel’s crimes against humanity.

For people across the globe who experienced colonization, the British Army has long been regarded as one of the most violent organizations in history.

Elbit, however, proclaims itself proud to support that army. Britain’s troops look “cool” with Elbit’s wearable computers strapped to their backs, the company brags.

When the weapons industry makes killing as easy as ordering a pizza, there is a risk we will no longer be shocked by how it profits from suffering. Activists who are determined to keep us shocked must be applauded.

Sometimes it even conceals the fact that it is an Israeli company. Promoting its British investments on Twitter, Elbit favors the deceptive hashtag “made in Britain.”