‘In My Heart, I am a Palestinian‘: Palestine Mourns Legendary Footballer Diego Armando Maradona 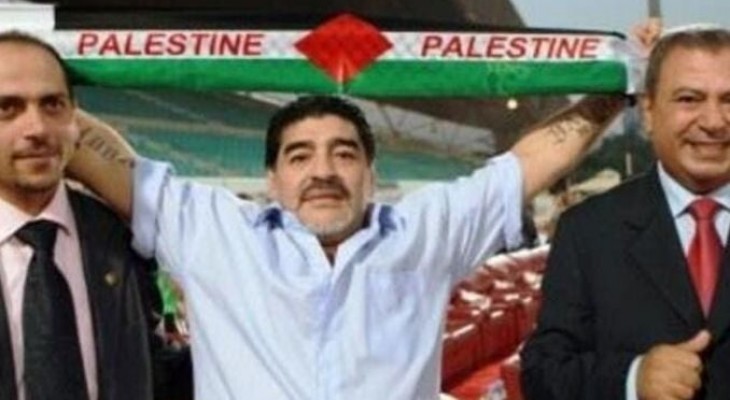 The 20th century’s greatest footballer, Diego Armando Maradona, died in San Andrés, Argentina, at the age of 60. The Argentine Football Association reported that the cause of death was cardiac arrest.

Maradona has been struggling with various health crises in recent years, the most recent of which was earlier this month when he reportedly suffered from a brain hemorrhage.

Maradona’s fans around the world expressed their shock and deep sadness for his passing. Palestinians were not an exception. However, for Palestinian football fans, Maradona represented more than a mere player, arguably the best in the world. He was something else entirely.

“In Palestine, you cannot hate Maradona. Your only option is to love him and you couldn’t have any negative opinion about him,” Palestinian journalist and editor of The Palestine Chronicle Ramzy Baroud said. “Maradona inspired something in us as a collective – a man of small built, from a terribly poor background, brown like us, fiery like us and passionate like us, making his way to the top of the world. For us, it was not about football or sports. It was about hope. It felt as if anything was possible.”

“You can only imagine our excitement when we learned that Maradona cared for Palestine, and made many gestures in support of our struggle. Our joy was complete. Indeed, until the very end, he took moral stances for Palestine, affirming, once more, in July 2018 that ‘In my heart, I am a Palestinian,” Baroud added.

The football legend had a heart attack at his home just two weeks after leaving hospital.

He was a great friend & supporter of Palestine. #RIPMaradona pic.twitter.com/OEBa8NallR

The statement of solidarity was communicated then to Palestinian Authority President Mahmoud Abbas. However, this was not the only instance in which Maradona was vocal in his support of the Palestinian cause.

During the Israeli war on Gaza in the summer of 2014, Maradona expressed his outrage. “What Israel is doing to the Palestinians is shameful,” he said in a statement.

Also, in that same year, media reports spoke of negotiations between the Palestinian Football Association and the Argentinian football legend, who was rumored to be the next coach of the Palestinian national team during the 2015 AFC Asian Cup.

For example, in 2012, Maradona described himself as “the number one fan of the Palestinian people .. I respect them and sympathize with them.”

“Growing up in Gaza, we loved Maradona. In fact, personally, I loved and played football because of him. Whenever he played, whether for Argentina, Napoli or other teams, we would drop everything and gather in front of our small black and white television set to watch him play,” Baroud said.

“In Palestine, we share the struggles of all oppressed, working-class people everywhere, and, in turn, we say ‘In our collective Palestinian heart, we are Argentinians; we Are South Americans,” Baroud added.

“Thank you, Maradona. You will forever represent something beautiful in all of us.”