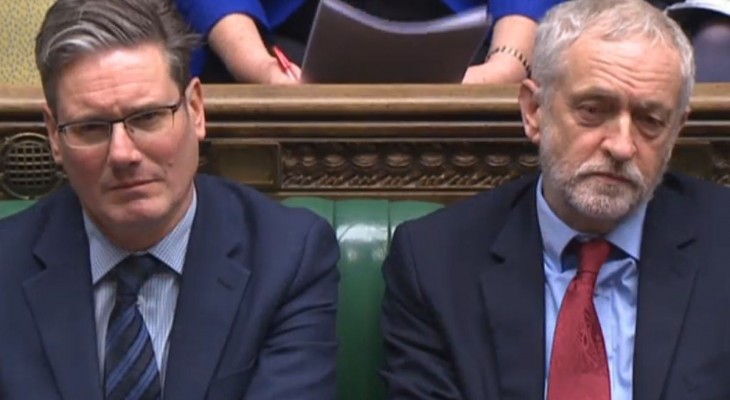 Keir Starmer has refused to allow Jeremy Corbyn to sit as a Labour MP, even though the former leader’s party membership was reinstated.

The leader decided not to restore the Labour whip to Corbyn, meaning he will not sit and vote with the parliamentary party he once led.

Starmer said: “Jeremy Corbyn’s actions in response to the EHRC (Equality and Human Rights) report undermined and set back our work in restoring trust and confidence in the Labour Party’s ability to tackle anti-Semitism.

“In those circumstances, I have taken the decision not to restore the whip to Jeremy Corbyn. I will keep this situation under review.”

It follows a fierce backlash over the controversial decision on Tuesday by Labour’s ruling body to reinstate Corbyn’s membership following another anti-Semitism storm.

Corbyn was suspended from the party in October over his reaction to the EHRC report into anti-Semitism in the party.

Though the watchdog found Labour had committed unlawful acts of harassment and discrimination during the period he was in charge, Corbyn said allegations about anti-Semitism had been “dramatically overstated” by his political opponents.

Corbyn, who later said he did not intend to “belittle” anti-Semitism allegations, was issued with a “warning of conduct” letter as a sanction over the response.

Starmer added in a statement on Wednesday: “Since I was elected Labour leader, I have made it my mission to root out antisemitism from the Labour Party.

“I know that I will judged on my actions, not my words.

“The disciplinary process does not have the confidence of the Jewish community. That became clear once again yesterday.

“It is the task of my leadership to fix what I have inherited. That is what I am resolute in doing and I have asked for an independent process to be established as soon as possible.

Veteran Labour MP Margaret Hodge, who is Jewish, said withholding the whip from Corbyn was the “right decision”.

She tweeted: “Yesterday has shown once again just how broken and unjust the existing complaints system is. It has caused untold hurt and anguish across the Jewish community, undermined progress made and made me question my own place in the party.

“As Corbyn has refused to himself accept the findings of the EHRC report, refused to apologise for his actions and refused to take any responsibility, withholding the whip is the right decision.”

Labour MP Richard Burgon, who was shadow justice secretary under Corbyn, called for the whip to be restored.

He tweeted: “Jeremy Corbyn has rightly been reinstated to the Labour Party.

“That decision must be respected and implemented across the Labour Party. Jeremy should immediately have the whip restored. At a time of national crisis, division in the Labour party serves nobody but the Tory government.”

Andrew Scattergood, Momentum co-chair, the organisation set up to support Corbyn's leadership, said Starmer was "making it up as he goes along".

He said: “A disciplinary panel found that Jeremy Corbyn had not broken any rule, so now Keir Starmer is making it up as he goes along. This is not only farcical and incompetent, it is a blatant political attack on the left at a time when Labour should be united in taking on the Tories.

"The recent National Executive Committee election results show that there is a clear socialist majority amongst the membership. Together we will fight for a socialist Labour Party, committed to getting rid of our broken system and transforming Britain in the interests of the many. They can’t remove the whip from our movement.”

The Board of Deputies of British Jews called the move an “appropriate leadership decision”.

President Marie van der Zyl said: “Despite the EHRC’s finding that the party had acted unlawfully under Mr Corbyn’s watch, Jeremy Corbyn’s initial reaction to the report was dismissive and he has been shameless and remorseless for what he has put the Jewish community through.

“Keir Starmer has now taken the appropriate leadership decision not to restore the whip to Jeremy Corbyn.

“We continue to say that ‘zero tolerance’ must mean precisely that, whether for anti-Semites or their apologists.”

The Campaign Against Anti-Semitism was more critical, however, telling Starmer to “get a grip” of the Labour Party, and that withholding the whip was “offering the Jewish community crumbs”.

Chief executive Gideon Falter said: “We have been conned. We did not go to the lengths of asking the EHRC to investigate the Labour Party only to return to the days of opaque, arbitrary decisions by panels that are unfit for purpose.

“Withholding the whip from Jeremy Corbyn is offering the Jewish community crumbs. The EHRC ruled that Labour’s disciplinary processes were unfit but Sir Keir allowed Mr Corbyn to be tried under them.

“Not only that, but Mr Corbyn should never have been suspended merely for his response to the EHRC’s damning report, but for the responsibility he bears for the Labour Party being found guilty of committing unlawful acts of anti-Semitism by the EHRC.

“Sir Keir needs to get a grip of his party and ensure that Mr Corbyn is held to account for what he did to Britain’s Jews.”