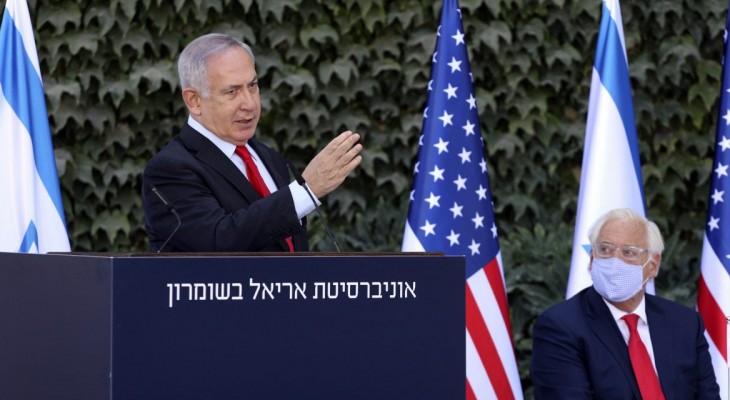 Israeli Prime Minister Benjamin Netanyahu, left, and US Ambassador to Israel David Friedman attend a ceremony to sign amendments to a series of scientific cooperation agreements, at Ariel University, in the West Bank, Oct. 28, 2020. (Emil Salman/Pool via AP)

The normalization train has left the station and Palestinians can expect more Arab countries to normalize with Israel, which will add more nails in the coffin of the two-state solution.

All three recent agreements between Israel and the United Arab Emirates, Bahrain, and Sudan were signed in direct contradiction to the Arab League’s long-standing policy of predicating normalization on an end to Israel’s occupation of Palestinian, Syrian, and Lebanese lands. The Arab Peace Initiative that was brought to an Arab League meeting in Beirut in 2002 by then Saudi Crown Prince Abdullah was based on international law and UN resolutions, at the heart of which was the principle of “land for peace.”

Had Israel agreed to and implemented this astonishingly reconciliatory offer, it would have had peace with all Arab and Muslim countries, and the Palestinian people would have had their independent state based on UN resolutions. Instead, Israel missed a historic opportunity for peace. In 2006, Israeli Prime Minister Benjamin Netanyahu again rejected the deal when he said: “If the Arab nations grasp the fact that they need to revise the Arab League proposal according to the changes Israel demands, then we can talk. But if they bring the proposal from 2002 and define it as ‘take it or leave it’ – we’ll choose to leave it.”

Not only did Israel “leave it” in 2013, it rejected peace again despite the Arab League amending it to allow for land swaps to be agreed between the Palestinians and the Israelis. In the meantime, Israel continued to settle its citizens illegally in the West Bank, East Jerusalem, Gaza, and the Golan heights. In 2002, the number of illegal settlers in these areas was just over 400,000. Today, the figures have grown to almost 650,000 in the West Bank and the Golan Heights.

In 2018, US Ambassador to Israel, David Friedman, referred to the occupation as an “alleged occupation” and demanded the US State Department drop the term from its communications.

Under the Trump’s administration and the “Deal of the Century,” the illegality of the settlements was questioned as was the extent of the occupation. In 2018, the US Ambassador to Israel, David Friedman – a supporter of Israel and a funder of the settlement enterprise, referred to the occupation as an “alleged occupation” and demanded the US State Department drop the term from its communications. The US State Department’s annual Country Report on Human Rights Practices for 2017 thus removed “Occupied Territories,” occupation, and discrimination from the Israel country chapter. Instead, it changed the country chapter on “Israel/Occupied Territories” to “Israel, Golan Heights, West Bank, and Gaza.”

In 2019, US Secretary of State Mike Pompeo went further, declaring that: “After carefully studying all sides of the legal debate, [the Trump] administration agrees … [the] establishment of Israeli civilian settlements in the West Bank is not, per se, inconsistent with international law.”

In the Trump administration’s haste to grant Israel more gifts before the US presidential election, Ambassador Friedman signed a deal related to amending existing scientific agreements with the Israeli Prime Minister to effectively remove the Green Line which marks the internationally recognized border between Israeli and occupied Palestinian land. In a statement, the US Embassy now based in Jerusalem said the pact will “remove geographic restrictions” on scientific cooperation agreements, which had previously only been applied to universities within the Green Line. “These geographic restrictions are no longer consistent with US policy,” the statement said. This is in direct contravention of UN resolution 2334 from 2016, which distinguished between Israel and the occupied territories, and called upon “all states . . . to distinguish, in their relevant dealings, between the territory of the state of Israel and the territories occupied since 1967.”

While the Israel-UAE normalization deal was claimed to end the prospect of annexation, both Netanyahu and Friedman completely rejected the restriction.

While the Israel-UAE normalization deal, named “The Abraham Accords,” was claimed to end the prospect of annexation, both Netanyahu and Friedman completely rejected the restriction. The deal signed at Ariel University – located in an illegal settlement — is a de facto recognition of Israeli sovereignty over any part of illegally occupied Palestinian land that Israel chooses to build on.

What the above move and continued new settlement unit announcement shows is that the agreements between Israel and Arab countries have come at no price for Israel and no benefit to the Palestinians. In fact, they weaken the Palestinian position; the Palestinian leadership can no longer call on the normalizers to support the central tenant of its strategy for peace, namely an independent Palestinian state on the 1967 borders, with East Jerusalem as its capital. The normalizers have not made a condition of the agreements either, even if that was to be achieved concurrently with the development of normalization.

The Palestinian leadership failed to even obtain condemnation of the Israel-UAE deal at the Arab League. While the remaining non-normalizing Arab states at the time claimed they were committed to the Arab Peace Initiative, that proved to be typical Arab rhetoric. Neither the deal with Bahrain nor Sudan demanded an end to the occupation of Arab land.

The UAE has gone further in allowing the sale of wine from an illegal Israeli settlement in the Golan Height in the country. This type of decision – and there may be more in the pipeline – weaken the hands of supporters of Palestinian rights in calling for a boycott of Israeli settlement goods, and for freedom, justice, and equality for Palestinians as demanded by the BDS movement. Further, if the UAE wanted to source wine from historic Palestine, it could have sourced Palestinian wine, to help the legitimate, local wine industry rather than the illegal settler wine industry.

The Palestinian leadership has been trying to find another mediator other than the US to help resolve the conflict.

Having ceased all contacts with the US administration due to its nakedly pro-Israel stance, starting with recognition of Jerusalem as the capital of Israel, the Palestinian leadership has been trying to find another mediator other than the Americans to help resolve the conflict. Palestinian President Mahmoud Abbas recently called for an international peace conference next year and although it seems to have found favor with Russia and some European countries, there is skepticism over whether it will happen and if the US and Israel will attend.

In light of Joe Biden winning the US presidential election, Palestinians hope that he will be supportive of the idea – as there are indications he might resurrect the two-state solution demolished by the Trump bulldozer – and that “negotiations” will again start for an independent contiguous Palestinian state with East Jerusalem as its capital. With Trump’s loss, there is fear that his team will work in tandem with the Israeli government. Israel will annex the West Bank and Trump will recognize “reality,” making it more difficult for Biden to row back to a fair US position.

However, one element remains that will reject these tactics: the resilient Palestinian people. Not only through their determination but also through their sheer number, they will thwart attempts to deny their inalienable rights and leave them in permanent limbo.

In a land ruled by one recognized state – Israel, which through its Nation-State Law gives the right to self-determination to only half the inhabitants of the land, confirms its identity as an apartheid state. The only way for it to move away from this label, would be to give equal political, civil, and religious rights to all inhabitants. If Israelis are not willing to agree to that, then they must push their government to make a fair two-state solution based on international law a reality.