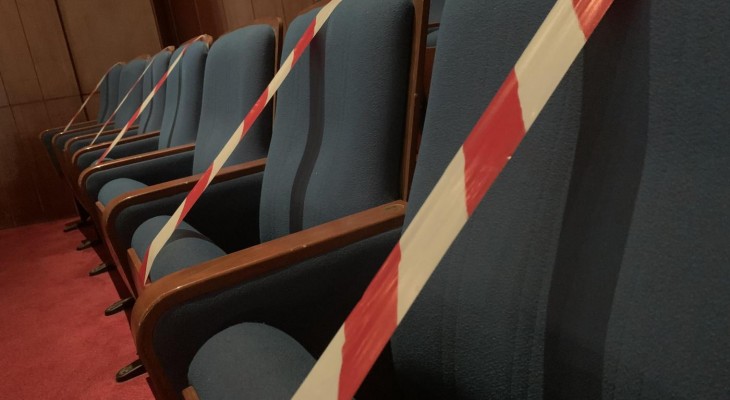 In the main hall of the Ramallah Cultural Palace, the annual Palestine Cinema Days film festival got underway on 20 October under exceptional circumstances.

More than half of the seats were sealed off with striped red-and-white tape in line with strict Covid-19 preventive measures to maintain social distancing and safety.

The challenges facing the festival’s seventh edition this year were twofold: the pandemic and recent international funding restrictions on Palestinian institutions, particularly cultural ones. Yet, the organisers of the festival, Ramallah-based Palestinian NGO Filmlab, managed to bring the event to fruition and executed it gracefully against all odds.

Silence fell among the crowd as the opening film began; it was the first screening in the entire Arab region of the Iranian film There is No Evil. Directed by Mohammad Rasoulof, the 2020 film won the Golden Bear award for Best Film at the 70th Berlin International Film Festival in spring this year.

In the hall that fits 750 people, about 200 individuals attended the opening ceremony in Ramallah.

According to festival spokeswoman Khulood Badawi, this year witnessed a sharp drop in attendance compared to last year’s ceremony, when some 1,000 people attended, forcing the management team to open an additional hall.

The week-long event will consist of 30 film screenings taking place across a number of Palestinian cities including Gaza, Bethlehem, Jerusalem and Haifa. A diverse selection of local and international films are being shown, including from Afghanistan, Sudan, Lebanon, Italy, Syria and France.

The Palestine Cinema Days festival, which ranges between six to 10 days, has been held annually in October since its launch in 2014, with the aim of placing Palestine on the global filmmaking industry map, as well as to promote local and international films to contribute to the revival of cinema culture in Palestine.

The festival is also typically accompanied by panel discussions, filmmaking workshops, and networking opportunities with international filmmakers and producers.

Speaking to Middle East Eye, artistic director of the festival Hanna Atallah highlighted how carrying out the festival, regardless of the pandemic, was already challenging under the Israeli occupation, and with tightening of financial restrictions on Palestinian institutions imposed by foreign governments and international donors amid a bleak political future.

"The spread of the coronavirus pandemic in Palestine constituted an additional challenge to the array of challenges that we face annually," said Atallah, explaining that a plan was tailored for each city, changing daily based on health and closure developments on the ground.

The festival comes against the backdrop of insufficient funding, particularly after the European Union imposed conditional funding terms on Palestinian institutions, compelling local organisations to screen their own employees in order to ensure that no beneficiaries of their projects or programmes are affiliated with groups listed on the EU terror organisations list.

The EU move and conditional funding clause were rejected by 135 Palestinian institutions, which sent a joint letter to Thomas Nicholson, chargé d'affairs of the EU.

He said they adapted to the current dynamic circumstances and made do with what was available. They were able to secure alternative funding this year through local and international friends and supporters, as well as friendly local institutions, said Atallah.

However, some compromises and components of the festival changed: it received no international guests, and two prizes from the Palestinian Sunbird award were cancelled. The number of films being shown was also reduced, as well as the number of staff.

According to Badawi, the festival spokesperson, the number of films was halved this year, from 60 screened last year and 80 in the years prior to that.

Palestinian film director and programmer of the festival Laila Abbas told MEE that, despite the limitations, the festival was able to follow through with its purpose: bringing a fine selection of artistic, independent international and local films to the Palestinian public, ones that might not be available to watch without a festival of this kind.

"The films are diverse in their content, and we brought them from a number of different countries around the world,” said Abbas, explaining that they strive to create a connection between Palestinians and the outside world, and to create cultural awareness.

She explained that the biggest question faced this year was deciding whether to hold the festival.

"We felt that Palestinians are hungry for a cultural festival of this kind," she said, adding that the organisers wanted to "send a message that the challenges facing us, including scarcity of support, funding and difficult political conditions will not stop us as Palestinians".

Mohammad Arouri, a 19-year-old university student who attends the festival every year, said he was pleased with the manner in which it was executed this time.

"I have a passion for watching films, especially those that are not subject to the typical commercial conditions. FilmLab was able to provide this space for us in Palestine by bringing films from all over the world," Arouri told MEE.

In light of the coronavirus pandemic, he said, cultural spaces and events have taken a hit. "The festival restored this space, implemented preventive measures, and organised this important cultural activity.”