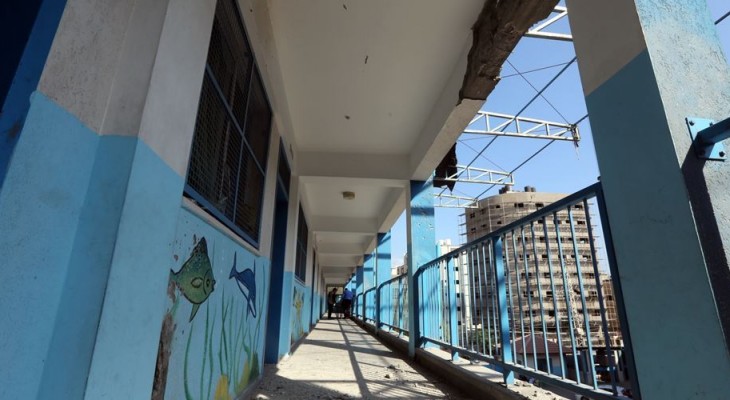 The Israeli occupation forces (IOF) demolished on Wednesday a primary school that was funded by the European Union in the pastoral community of Ras al-Teen, east of Ramallah.

The Norwegian Refugee Council (NRC) expressed its deep concern about the demolition of an educational school by the IOF. It indicated that this school serves 50 students from the Ras El-Teen community, from the first to the sixth grade.

The NRC stressed that the occupation's demolition of this school will force students to walk approximately 5 kilometers to reach the closest school to them in al-Mughayyir village.

The school opened at the beginning of the school year over a month ago, and the occupation authorities notified the building of demolition under the pretext of building without a license. However, the Palestinian inhabitants were able to issue a precautionary order to freeze the demolition for a period of 30 days.

Since its opening, the school has suffered from many problems, most notably the threat of the Israeli occupation. Nevertheless, when students started their academic year there, the school had no roof and it was just a building of primitive stones, then workers started adding the rest of the facilities to it.

The Irsheidat clan inhabited the Bedouin Ras al-Teen for more than 40 years in an area located between the villages of al-Mughayyir, Kafr Malik and Khirbet Abu Falah, northeast of Ramallah.

Hajj Abu Salama, the clan's mayor, stated in a statement earlier that the lands in which the residents lived are under Palestinian control but Israel is trying to banish them from it.

Abu Salama said that the IOF began about three years ago to deliver notices to the community's residents to demolish their tents or tin homes. 50 families live in Ras El-Teen, each consisting of eight members.

He explained that the inhabitants live under harsh conditions as there is no water or electricity network, and there is not even a road network. In the winter, the suffering doubles greatly because of the rain and lack of services.

The occupation authorities reject 98 percent of Palestinian requests for building permits in Area C in the West Bank.

Since the beginning of this year, the United Nations revealed that the Israeli occupation authorities had demolished 555 facilities in the West Bank, including East Jerusalem. 747 Palestinians were forcibly deported including 382 boys and girls.