Is the normalisation deal really a win for Israel? 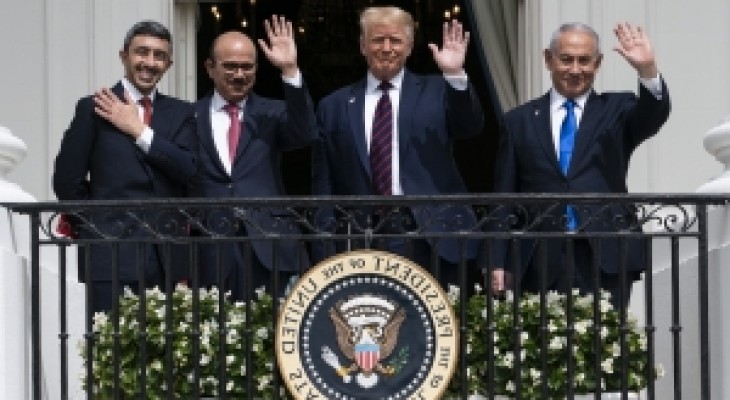 The signing of the deal normalising relations between Israel, Bahrain and the United Arab Emirates caused a stir in the Middle East. It seems Israel is increasingly gaining political ground in the region, expanding trade and financial relations, and solidifying an Arab-Israeli axis against Iran. All of this is happening against the will of the Palestinian people and without any concession from the Israelis.

These developments have raised a number of important questions on the political scene in the Middle East. Does this diplomatic success for Israel mean that the Palestinian question has been completely sidelined in Arab politics? Have Palestinians lost their “veto power” on the normalisation of relations between Arab states and Israel? Will the UAE be able to bypass the Palestinians, the original owners of the cause, and come up with a “solution” to the Palestinian issue?

The Palestinian loss of ‘veto power’

For decades, there has been a consensus among Arab states that any dealings with Israel have to be conditioned on a “land for peace” arrangement that includes its withdrawal from the territories it occupied during the 1967 war. That is, the Israelis would have to give up occupied territory for the creation of an independent Palestinian state in exchange for normalising relations with Arab countries.

This consensus gave an unspoken “veto power” on normalisation to the Palestinians, making the resolution of the Palestinian issue the only way in which Israel would be accepted in the Arab world.

What the Emirati-Bahraini-Israeli agreement has done is basically sideline this past Arab consensus on how to deal with the Palestinian issue and make public what has been going on informally for years – the normalisation of relations between Tel Aviv and Abu Dhabi.

It demonstrates Emirati and Bahraini disregard for the long-term Arab position of “land for peace”. Abu Dhabi and Manama have effectively given the Israelis what they want – open political relations, trade, and backing for their anti-Iran confrontation efforts – without any real concessions on the Palestinian issue.

The Israelis do not hide their optimism that establishing full diplomatic relations with the UAE and Bahrain will open the door to establishing full relations with other countries, such as Oman, Saudi Arabia, Morocco, and perhaps Sudan. If these normalisation deals continue, then it would mean that the Palestinians have lost their “veto power” on normalisation with Israel and their cause has lost its political value to the Arab regimes.

While the deal is indeed bad news for the Palestinians, it is important not to exaggerate its significance. Abu Dhabi, Tel Aviv and Washington have touted it as a “peace for peace” (as opposed to “land for peace”) initiative, trying to equate it to the peace agreements Egypt and Jordan concluded with Israel in the past. Israeli Prime Minister Benjamin Netanyahu, the architect of the deal, like most Israelis, knows very well that any such comparison is unrealistic.

After all, neither Bahrain nor the UAE has actually been at war with Israel and they also have no common borders, unlike Jordan and Egypt, which waged deadly wars against the Israelis. The peace deals that the two countries signed with Israel not only put an end to hostilities but also forced Israel to withdraw from territories it had occupied.

Nothing of such political importance was contained in the “peace” deal that Bahrain, the UAE and Israel signed last month.

The UAE, a peacemaker?

As bad as this deal is for the Palestinians, it does not make the Palestinian issue go away. Despite all the noise and PR, Israelis very well realise that normalisation of relations with Gulf nations will not “get rid of” millions of Palestinians. It cannot erase them from history or from reality.

There seems to be some hope among some moderate Israelis that the UAE, the new self-declared “peacemaker” of the region, could use the deal as a stepping stone and wield its influence to help resolve the Israeli-Palestinian conflict. In a recent article, former Israeli diplomat, Nadav Tamir, wrote about the possibility of Abu Dhabi initiating new negotiations between the Palestinian Authority and Tel Aviv to produce a settlement that includes a separate Palestinian state.

The success of such an initiative, however, is highly unlikely, given that the relations between Ramallah and Abu Dhabi are at an all-time low. The PA has made it clear it considers the Emirati deal with Israel a “betrayal” and has issued strongly-worded condemnations.

If the UAE fails to play a useful role in reaching a settlement with the Palestinians, Tamir fears that the agreement with the UAE could turn from a tactical achievement to strategic harm.

In the short-term, normalisation with Israel only adds to the isolation of the PA and could benefit Hamas – something that is not in the interest of Israel, which has long used the authorities in Ramallah to indirectly depoliticise and control the Palestinian population. In the long run, Arab normalisation with Israel without concessions on the Palestinian issue takes away the main Arab leverage to enforce a two-state solution, which could backfire.

A deeply weakened PA is likely to collapse and leave the administration of Palestinian towns and villages in the West Bank to their occupier – Israel. Such a development would only further put to the fore the apartheid practices of the Israeli state, giving full rights to Israeli Jews, while oppressing and discriminating against the native Palestinian population.

This would likely provide even more fuel into the transnational grassroots opposition to Israeli occupation and apartheid, which is already putting significant pressure on Israel to give the Palestinians their rights.

In this sense, the continuing denial of statehood to the Palestinians by the Israeli right-wing ruling elite and the collapsing support for Israel among younger generations of Americans and Western Europeans puts the country even more firmly on a path towards a one-state solution, where Israelis and Palestinians would enjoy equal rights. This would effectively mean the end of the Zionist dream of a Jewish state on all of historic Palestine.

The current Israeli political leadership is too short-sighted to see these potential developments. Netanyahu is enjoying the image boost the normalisation deal gave him and is probably hoping this would secure his re-election once the ruling coalition collapses and allow him to continue dodging jail over the corruption crimes he is being tried for. His premiership may well go down in history as the one that laid the groundwork for the end of the exclusive Jewish state in Palestine.

Thus, what may seem like a major loss for the Palestinian cause may turn out to be more harmful for the Zionist project. Sooner or later, the Israelis will have to face to consequences of denying Palestinian statehood.