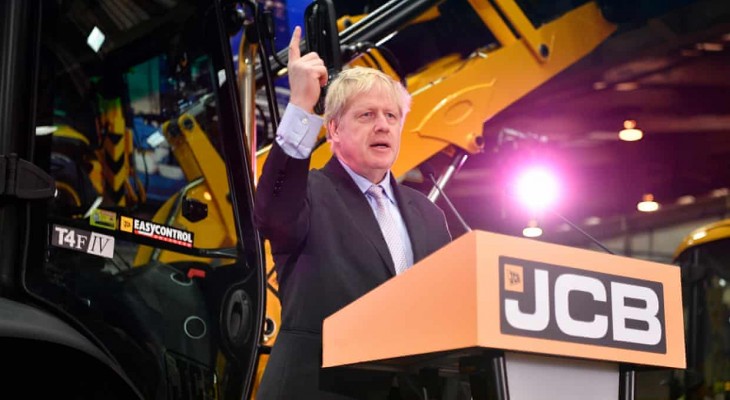 The British heavy machinery firm JCB’s sale of equipment used in the destruction of Palestinian villages in the Israeli-occupied West Bank is being examined by a UK government body to determine whether its due diligence process complies with human rights guidelines set by the Organisation for Economic Co-operation and Development.

The case is likely to test the degree to which multinationals are responsible if their export goods are sold by local distributors in ways that infringe human rights.

JCB, which has donated millions of pounds to the Conservative party and at least £25,000 to Boris Johnson’s leadership campaign, can now enter into government-overseen mediation with the NGO that made the claim or it can outright contest the claim.

The claim was launched by Lawyers for Palestinian Human Rights last December after JCB refused to communicate with the lobby group over claims that its tractors were being used to tear up Palestinian villages.

The little-known complaints procedure was set up in 2000 and is designed to give an avenue to press multinationals to abide by their corporate social responsibility undertakings as set out by the OECD.

The National Contact Point quango, a subsidiary of the Foreign Office that oversees the complaints, issued a statement on Monday. It said that after examining the Lawyers for Palestinian Human Rights complaint and hearing JCB’s rebuttal, it deemed that JCB had a case to answer in relation to some claims and that the issue fell within its remit.

The chair of JCB is Anthony Bamford, a Conservative peer. The company gave Johnson £25,000 for his leadership campaign. Overall the firm has given the Conservatives more than £10m since 2010, according to the Electoral Commission.

JCB had defended itself to the National Contact Point by saying that it simply sold its equipment to a third-party Israeli distributor, Comasco, and therefore had no responsibility over what was done with the equipment thereafter.

But the Palestinian legal group said Palestinian Bedouin communities in area C of the occupied West Bank were particularly vulnerable to demolitions and displacement in violation of their human rights.

The OECD guidelines require firms to seek ways to prevent or mitigate adverse human rights impacts directly linked to its business operations and products by a business relationship. It also asks them to have a policy commitment to respect human rights, and to carry out human rights due diligence.

The director of Lawyers for Palestinian Human Rights, Tareq Shrourou, said: “We welcome this initial assessment and the UK National Contact Point’s acknowledgment that there are serious human rights issues raised by our complaint under the OECD guidelines for multinational enterprises which warrant mediation or thorough investigation.

“JCB’s apparent failure to address the material and prolific use of its products in demolition and displacement incidents that cruelly impacts Palestinian families, and also its use in settlement-related construction which creates pervasive human rights violations, must cease immediately.

“We look forward to constructively engaging with JCB and expect it will do the right thing by complying with its human rights responsibilities.”

JCB said: “We are very pleased that the UK NCP has dismissed at the earliest opportunity any suggestion that JCB is involved in, or causes or contributes towards any human rights abuses whatsoever. There was no basis for the Lawyers for Palestinian Human Rights to make their complaint alleging this.

“As an organisation JCB does not condone any form of human rights abuse and we have a consistent record of providing urgent and substantial support in response to natural disasters around the world.

“While the NCP will now examine JCB’s human rights due diligence process, it has made clear that its decision to do so is not a finding against JCB and does not mean that it considers that JCB has acted in any way inconsistently with the OECD guidelines. We welcome the opportunity of engaging further with the NCP on these matters.”

• This article was amended on 13 October 2020 to clarify the text of the NCP’s initial assessment of the complaint against JCB and to add a comment from JCB in response to it.