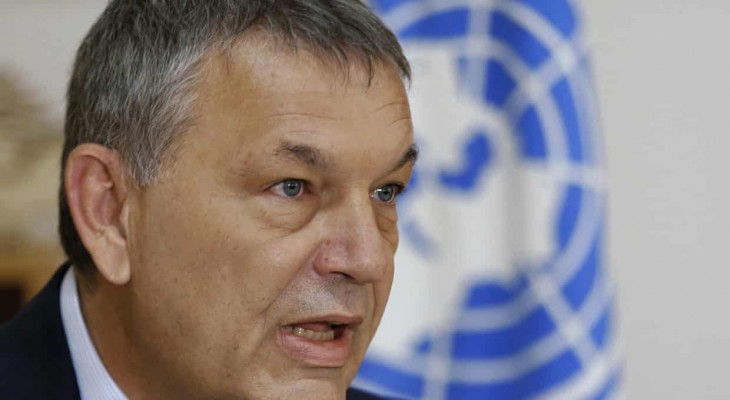 Lazzarini took over as commissioner general of the UNRWA after his predecessor resigned following claims of abuse of power. Photograph: Bilal Hussein/AP

People in Gaza are searching through rubbish to find food as Palestinians battle unprecedented levels of poverty, the head of the UN agency for Palestinian refugees has said.

Across Lebanon, Syria, Jordan, Gaza and elsewhere, Palestinian refugees are suffering at new depths because of the pandemic, according to the United Nations Relief and Works Agency chief, Philippe Lazzarini. “There is despair and hopelessness,” he said in an interview.

“In Gaza, people are going through the garbage,” Lazzarini said, referring to reports from UNRWA staff in the enclave. “More people are fighting to provide one or two meals a day to their families.”

First is the seemingly permanent threat of financial ruin. Then there is the breakdown in the relationship with its former largest donor, the US, which claims – in line with long-running Israeli attacks on the agency – that it is “irredeemably flawed”.

Add to that the threat of coronavirus ripping through refugee camps across the Middle East, home to many of the 5.6 million Palestinians supported by UNRWA. Meanwhile, Israel’s possible annexation of the occupied West Bank looms, threatening to stifle UNRWA’s work there.

Finally, comes the scandal. The former head of UNRWA resigned last year after an investigation involving accusations of widespread nepotism in the organisation, including allegations he hired a lover.

Collected, diplomatic and with three decades of humanitarian experience behind him, the Swiss Lazzarini has been brought in to steady a rocking ship. “In such a highly unstable, volatile environment, we need a predictable UNRWA,” he said. “We need a predictable organisation and predictable funding.”

Limited by pandemic restrictions – he had to isolate for four weeks in Jerusalem and Amman – Lazzarini has been focused on tackling the books first by rallying donors, even if it is via video calls.

“We are constantly in crisis mode when it comes to the cashflow,” he said. “UNRWA is constantly running after the cash.”

With a typical yearly budget deficit of well over £100m, the organisation of 30,000 staff is never more than four or five weeks away from running out of funds. “It’s unsettling,” he said, adding that UNRWA’s schools and health services are cutting back.

The financial crisis exploded in 2018 when Donald Trump cut up to $300m of annual donations, months after he angrily complained that the US received “no appreciation or respect” from Palestinians for the aid.

“It’s a threat, it’s a real threat,” said Lazzarini of the US cuts. “We have to take this threat into consideration.”

While UNRWA is working to rebuild the relationship with Washington, Lazzarini suggested the US move may have backfired.

Trump’s aid cut led to a wave of “exceptional solidarity around UNRWA”, he said, with other global donors filling the shortfall. In fact, 2018 was UNRWA’s most successful money-raising run for its core budget in the past five years.

“For the time being, while the relevancy or the legitimacy sometimes might be questioned, the mainstream support thinks differently,” he said.

But that image was again dented last year, when Lazzarini’s predecessor, Pierre Krähenbühl, resigned after an official investigation found “management issues”. A leaked internal review exposed allegations of “nepotism, retaliation, discrimination and other abuses of authority” at the organisation.

Despite the uncomfortable allegations, Lazzarini does not jump around the subject and even brought it up unprompted when interviewed. He said UNRWA had since bolstered its internal oversight body and ombudsman to reassure donors of the agency’s “ethical foundation”.

“They could see that new senior management was put in place,” he said. “The previous senior management which, because of the crisis, was decapitated, is now slowly being recomposed. And I think there is a willingness to turn the page.”

Yet just as the scandal fades, UNRWA is again in financial trouble, this time because of the pandemic. “There is more pressure on the organisation to deliver more, but at the same time, the environment of our donors is more complicated because they have all been impacted economically by Covid.”

Lazzarini, an experienced humanitarian, was appointed commissioner general of UNRWA in April, and leads it at a time of deep crisis for the agency.